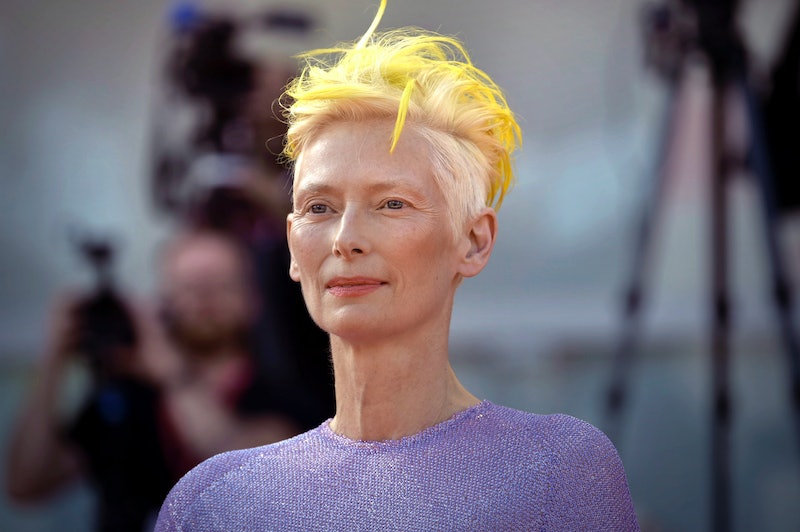 Her androgynous style, avant garde fashion choices, and bold approach to beauty may have made every one of Tilda Swinton’s red carpet appearances memorable. But at Venice Film Festival, Swinton’s neon yellow hair went far beyond the sartorial. The actor was attending the film festival to promote her new film The Eternal Daughter and revealed a bold new hair style that had everyone talking.

The actor and muse who has inspired everyone from Haider Ackermann to Francois Nars — who chose the star to front his make-up brand’s 2015 campaign — attended the press conference for her latest film sporting an oversized cornflower blue pinstripe shirt from Loewe. She teamed this with barely-there make-up and slick backed highlighter-yellow hair, which was a deliberate nod to the colours of the Ukrainian flag — whose hues represent the country’s blue sky (symbolising peace) above its yellow wheat fields (symbolising prosperity) — amidst the Russian invasion of Ukraine.

When complimented on the look by a journalist, the Oscar winner and style maven was keen to expand on her fashion and beauty choices, explaining “It’s my honour to wear half of the Ukrainian flag,” per Variety.

Bringing attention to the ongoing conflict in Ukraine through her bold hair colour may not have been quite what the Ukraine’s president, Volodymyr Zelensky, had in mind when during a virtual cameo appearance broadcast during the opening of the film festival. In it he urged actors and film makers to speak out against the conflict. However, with a sense of style guaranteed to attract attention and command column inches, the look was a masterclass in making a statement without saying a word.