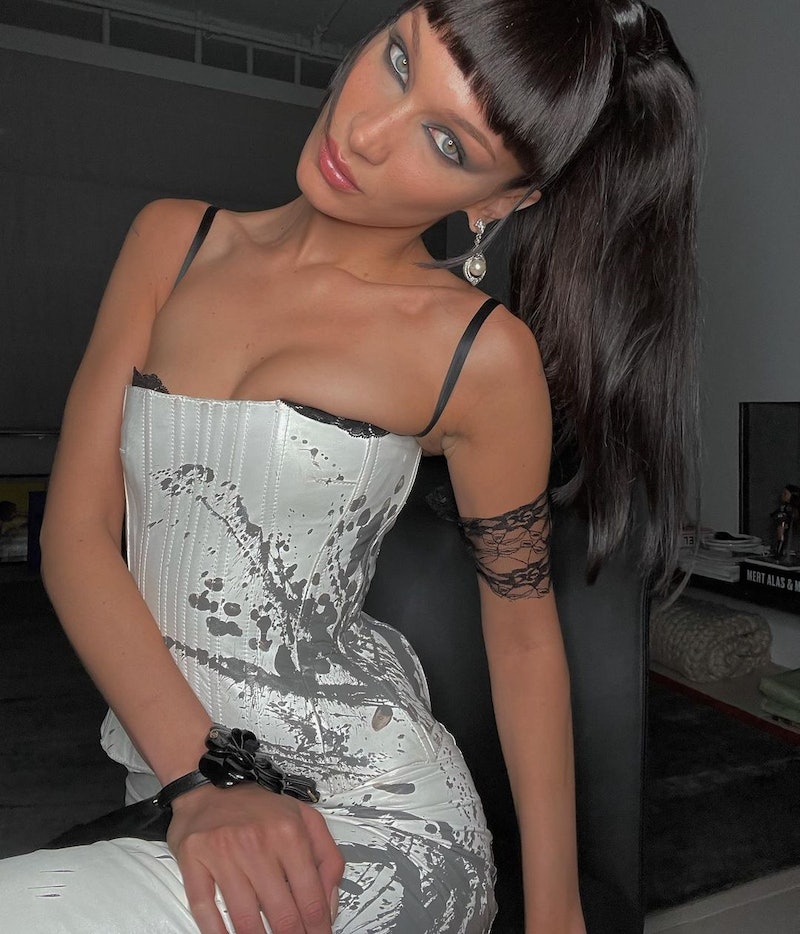 If you’ve been following the resurgence of ’90s-era trends, you’ve probably wondered: Are thin eyebrows really coming back? Brace yourself, because yes, skinny brows have re-entered the (AOL) chat, whether you like it or not. But before you begin panicking or plucking, experts say there are ways to achieve the ultra-plucked aesthetic without necessarily removing hoards of hair.

In fact, celebrity brow artist René de la Garza believes that the contemporary narrow brow isn’t actually a carbon copy of what you saw in the ’90s. “It’s more sculpted than it is thin,” the founder of Brow Down Studio tells Bustle. “My clients are over the ‘overgrown-lockdown’ brow look and just want to go all out with a beautiful pristinely sculpted look.”

Of course, some celebs (see: Bella Hadid, Doja Cat, Barbie Ferreira) have fully leaned into the retro aesthetic, genuinely rocking the super-slim style — and plenty of others will likely follow their lead. “Bella Hadid is at the forefront of this movement of thin brows — she’s the Y2K queen,” Joey Healy, celebrity brow artist and owner of Joey Healy Eyebrow Studio, tells Bustle. “Similar to how Cara Delevingne gave us that thicker brow look in the 2010s, Bella is currently pioneering the skinny brow.” Celebrity brow artist Tonya Crooks, who serves as creative director of Arches & Halos, echoes this, noting that eyebrow trends repeat just as fashion does. “[This look] was the quintessential ‘supermodel’ brow, and seeing as those icons are making a presence back on the scene, it’s safe to say they are bringing the brows with them,” she says.

Wondering how to thin your brows yourself? Read on for your comprehensive guide on recreating the skinny brow trend in the chicest way possible — or, for the tweezing-resistant, how to fake the look with makeup. And, however your arches turn out, always remember: Your brow hair will grow back.

We at Bustle only include products that have been independently selected by our editors. We may receive a portion of sales if you purchase a product through a link in this article.

How To Fake Skinny Brows With Makeup

Despite the resurgence of skinny eyebrows, experts assert that many people who rocked the look decades ago actually learned their lesson the first time around — so they’re seeking ways to “fake” them instead. “Brow trends don’t last,” Nicky Cayot, esthetician, brow specialist, and owner of Nicky C. Artistry, tells Bustle. “I think anyone who lived through the ’90s and abused the tweezer can vouch for how much brow [growth] serum they used to get their naturally full brows back.”

Barbie Zarraga, brow artist and founder of Browaholic Brow Studio, agrees, noting that the ’90s eyebrows didn’t necessarily produce the best-looking arches. “The trend was very skinny and had a very rounded arch — kind of like the head of a hockey stick,” she says. “So if you're trying to start a little DIY brow project at home, don't over-tweeze the brows to replicate the ‘Pamela Anderson’ look." Instead, she and Cayot strongly encourage the thin brow-curious to experiment with makeup before tweezing.

As an example, Doja Cat has embraced a more artistic approach to the thin brow trend, taking her favorite colored eyeliners and creating one-of-a-kind brows. Hearts, flowers, apples, and even smiley faces can be found gracing the superstar’s forehead. Here’s how to recreate the look yourself.

To create a refined and sculpted look that doesn’t require tweezing, Melanie Marris, celebrity brow stylist and founder and CEO of Brow Code, suggests defining your brow shape with a product that sets your hairs in place, like Brow Code’s Brow Pomade Creamade. “It’s ideal for outlining your thin brow line and filling in any sparse patches, which is really going to highlight that skinny shape,” she says.

Healy also recommends trimming the brows short with scissors, as this makes them look neater and tighter without damaging the hair follicles. “[Trimming] will make the brow feel a lot tighter without removing any hairs,” he says. Pro tip: Use a dermaplane razor to remove any extra hair or peach fuzz surrounding the brow to ensure the area feels extra clean.

Next, use concealer to shape your arches and cover any unwanted hair that strays from the narrow shape you’re going for. “Concealer can really emphasize that thin line,” says Marris, who advises outlining the shape of the brow along the top and under the arch to create contrast and make it really pop. She recommends using a creamy concealer that is an exact match to your skin tone (for this, Cayot personally prefers Tarte’s Shape Tape). After applying and shaping, blend the concealer, diffusing any harsh lines for a natural finish. For extra emphasis on the final shape, you can finish off with some highlighter along the brow bone.

Once you’ve concealed the surrounding hair, de la Garza and Cayot suggest using a brow pencil to fill with, as this will emphasize the bold, “thin” shape you’ve created, then set with a brow gel to complete the look.

How To Thin Your Brows With Tweezers

If you’re wondering how to make your eyebrows thinner but don’t have the time to see a professional (though, FWIW, consulting one is what brow experts advise across the board), Healy and Cayot strongly suggest at least mapping your brows before you pluck. “This will give you a better idea of areas to avoid [plucking] to prevent that over-tweezed look,” Cayot says.

There are various schools of thought on how to map one’s brows, though Cayot’s quick version should do the trick: Simply use a pair of tweezers as you would a protractor in math class (aka those semi-circle rulers that measure angles) to determine the equal distance between your nose and brow. Line the bottom of the tweezers with the bridge of your nose, aligning the top with where your brow starts — and never move their base (make sure it stays on the nose!). From there, move the top of the tweezer diagonally across the eye until it hits your natural arch — kind of like a clock’s hand.

Next, move the top diagonally to match the brow’s tail, marking each spot accordingly to help you remember. This should give you a basic idea of where your brows should end and begin before you pluck. “You really don't want them shorter than where the tweezers land, and going any longer can then start to make your eyes droop,” Healy says, adding that you also want to make sure your arch is placed about two-thirds of the way out — not centered.

Next, de la Garza advises filling in your brows before reshaping. “You’ll want to overdraw your brows slightly to prevent coming too close or removing the crucial brow hairs that could drastically change the shape,” he tells Bustle. His tip? It’s better to err on the side of caution and miss a few brows than to over-pluck. “When in doubt about removing specific brow hairs — leave them!”

Once you’ve started plucking, Zarraga emphasizes the importance of going slow, especially if you’re new to the skinny brow trend. “If your brows are naturally thick and full, I would suggest thinning them out gradually until you achieve the desired thickness,” she says. Pluck the first batch of hairs, wait a month to see how you feel, and then proceed to thin out (if you want to) every few weeks or so after.

Plus, according to Marris, over-plucking and waxing can cause serious brow damage — and spacing your plucking appointments out can help to prevent it. “Over-plucking can send a message to the plucked hair follicle that there is no need for it to produce regrowth, so I wouldn’t recommend overdoing it unless you’re fully committed to a thin brow for the long run,” she says.

Once you’ve obtained the brows of your dreams, you’ll need to maintain them by plucking every three weeks. “Get ready to do more maintenance to keep up with this trend,” says Healy. “You will probably have to do maintenance every two to three weeks to keep it nice and tight.”

5. Maintain The Look With Makeup

You can also extend the time between plucking by faking the look with makeup. “Concealer is your friend when your brows are overgrown,” de la Garza tells Bustle. He advises applying it beneath and around the brow to help make the shape of your arches stand out. Similarly, Healy suggests highlighting the area beneath the brow to cover regrowth while still emphasizing the arch. “I love using a cream-based highlighter to help the brow look tighter,” he says, adding that it should be applied underneath the brow bone.

Then, for emphasizing your brows, Healy recommends using an eyebrow pencil versus a powder. “A powder can make the brow look more dense whereas a pencil will make the brow look sharper in structure,” he tells Bustle. Once that’s done, you can pat yourself on the back: You’ve just mastered the ’90s skinny brow.

Skin By Mented
Mented
High Rise Highlighter
Joey Healy Studio
BWH Brow Duo Highlighter
BWH Cosmetics
Oh My Brow! Brow Highlighter
European Wax Center
More like this
The "Cloud Skin" Trend Is An Updated Way To Wear Matte Makeup
By Jordan Murray
Not Sure How To Style Bangs? Make These Easy Hairstyles Your Go-To
By Olivia Rose Ferreiro
The 12 Best November 2022 Beauty Launches, According To Our Editors
By Rachel Lapidos
The 8 Best Beauty Looks At The 2022 People’s Choice Awards
By Audrey Noble
Get Even More From Bustle — Sign Up For The Newsletter

This article was originally published on Oct. 25, 2021