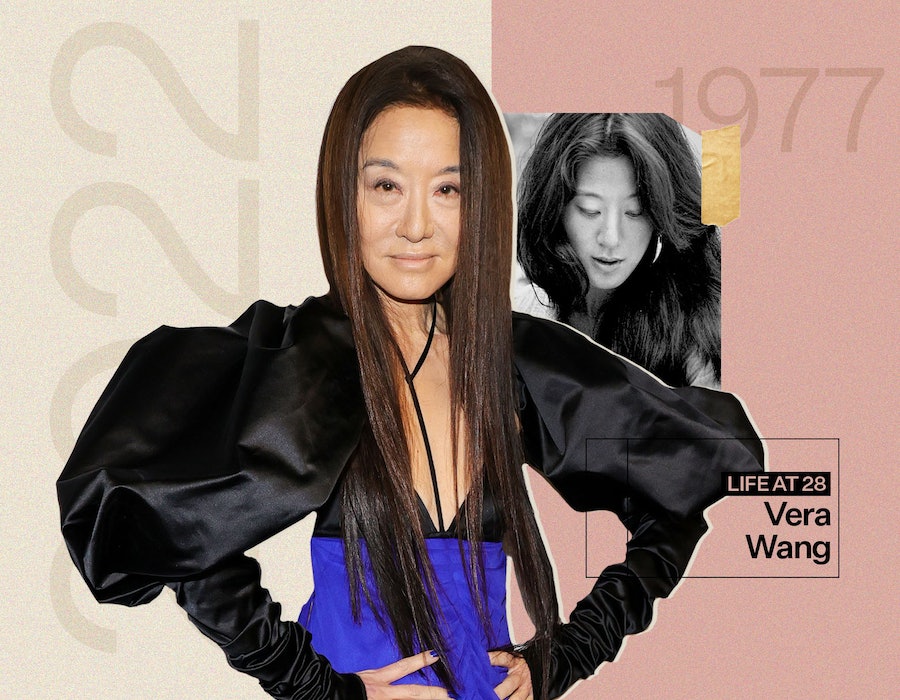 Before Vera Wang was, well, Vera Wang — aka one of the most eminent American bridal and fashion designers — she worked as an editor at Vogue. Before that, she spent 13 years as a competitive figure skater and had dreams of an acting career, the latter of which were dashed when she was at Sarah Lawrence. “I realized in the first semester that there weren’t going to be any roles for the Chinese-American girl,” Wang, now 73, tells Bustle.

But a summer job as a sales assistant at Saint Laurent would launch her on an entirely different trajectory, one in which she realized that she was meant to work in fashion. A YSL frequenter tapped her to join the ranks of Vogue, and by 28, Wang was “fully ensconced” in her career at the iconic magazine.

“I didn’t really have much of another life [outside of Vogue]. That’s why I remember it so clearly,” she tells me as she looks back on her world in 1977. Wang eventually would leave Vogue to take a job as a design director for accessories at Ralph Lauren before starting her own eponymous brand in 1990. She’s since crafted wedding gowns for such icons as Gwen Stefani, Ariana Grande, Mariah Carey, Alicia Keys, Hailey Bieber, and Kim Kardashian.

One of her latest ventures (which is delicious, btw), is Vera Wang Party Prosecco, which I sipped on as we chatted about her time at Vogue, her personal style in her late twenties, and why she eventually pivoted from editorial to design. Read on to hear about Wang’s life at age 28.

Take me back to 28, when you were working at Vogue.

I worked my way up from being what they called a “rover” — like Range Rover [laughs] — they move you around and have you try several different jobs. I really learned fashion from the ground-up. I covered the younger designers — I remember Marc [Jacobs]. They would bring in clothes for us to review, and we would choose what we were going to shoot. One day I walked out of what we call a run-through and said, “I think I saw more clothes between noon and 5 than most people see in a lifetime.”

I styled all the shoots and was traveling between September and April. I was probably only home two weekends — I was at shows and shooting in Paris. By 28, I worked my way to senior fashion editor, and my entire life was fashion and my career. When I joined [the magazine] it was bi-monthly. Can you imagine producing 24 issues in a year? And it was bigger in those days. That was Vogue back in the days of Irving Penn and Richard Avedon.

Certainly, at 28, I was well on my way into this industry. I knew my path was in fashion. I didn’t know I would still be working as hard as I am.

At this time, did you ever think you might have your own fashion company?

No. I didn’t feel I was qualified. After studying art history in Paris, I graduated and thought I might go to a design school like Central Saint Martins in London, but my father said he wasn’t paying for any more education. He wanted me to go to Yale Law or Harvard Business School. He said, “If you think you’re such a big hot shot, go get a job in fashion.” So I lucked out with the job at Vogue. But after styling other people’s clothes for so long, I still had in me this desire where I felt that I could do [design] too. I’m the kind of person who would buy a Saint Laurent jacket and examine how it was made from the inside out.

It was as it is today — very styled. I was an editor at Vogue, so I didn’t wear clothes in a normal way. I was wearing candy-striped Norma Kamali leggings. I would wear a Kenzo shearling jacket. I wore T-shirts that were like rugby shirts by Agnès B. I’d wear a beautiful coachmen’s jacket with leggings or crazy trousers. It was even more eclectic than I am now. I would do high-low [looks]. I would wear a $1.50 bandana in my hair or around my neck and pair it with a $1,800 blazer from Saint Laurent.

I’m not as much of a dress girl — oddly enough for someone who designs a lot of dresses. In my own personal style, it was always about mixing unlikely things.

What was a typical Friday night like for you at 28?

Friday night at 28 was clubbing. Studio 54. There was nothing ever like it, before or after. The beautiful thing about Studio 54 was that it was so inclusive. It wasn’t about a group of extremely wealthy people from the Upper East Side nor was it about only insider fashion people. Nor was it about stars like Halston and Andy Warhol. It was a mix, and it gave you this kind of freedom and acceptance. It had a much more democratic acceptance of age and of what you did. What you did need to have was a certain feeling of cool. But that’s what made Studio so famous. I went to all these clubs that tried to copy it, but there was only one Studio.

I would say that patience is a virtue, and you have to give yourself enough time to really learn and invest.

More like this
At 28, Roxanne Assoulin Was Managing Motherhood & A Jewelry Business
By Dominique Norman
A Look Back At Issey Miyake’s Most Iconic Designs
By Dominique Norman
How This Founder Inspired A New Wave Of Drinking
By Jordan Murray
Everything You Need To Know About NYFW’s Spring/Summer 2023 Schedule
By Bella Gerard
Get Even More From Bustle — Sign Up For The Newsletter