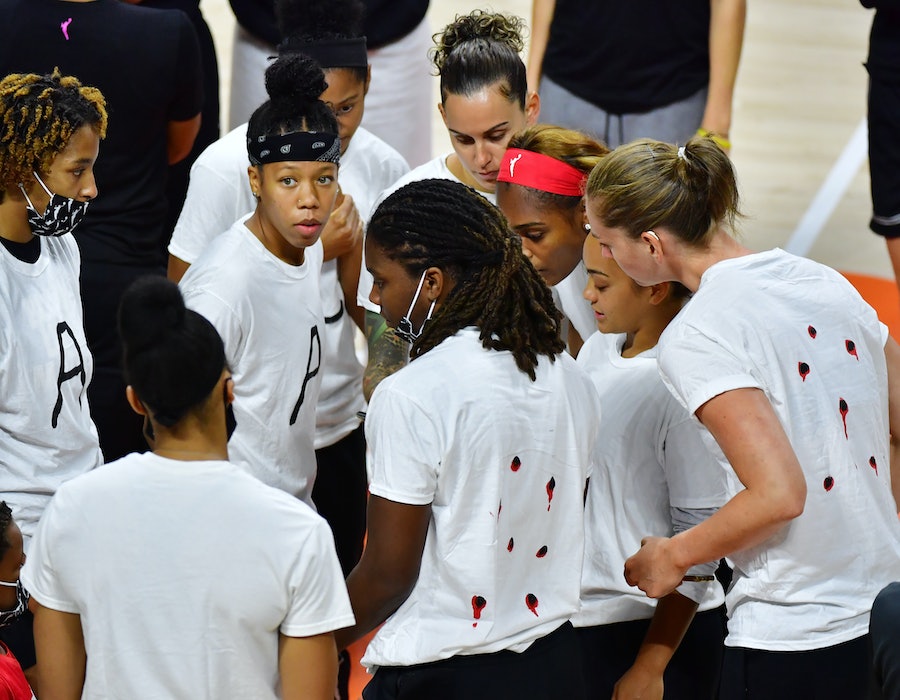 On Wednesday, the WNBA’s Washington Mystics team stepped on the court not to play a basketball game but rather to make a powerful statement. The players wore white T-shirts that had seven bullet holes on the back to commemorate Jacob Blake, the unarmed Black man who was shot seven times in the back by police as he entered an SUV in Kenosha, Wisconsin. Blake’s three children were in the vehicle at the time of the shooting, and he is currently being treated at a Milwaukee hospital. The front of the T-shirts also spelled out Blake’s full name.

“We wanted everybody to feel like they were supported,” said Ariel Atkins, who plays guard for the Mystics and spoke on behalf of the team. “Understanding that this isn’t just about basketball. We aren’t just basketball players and just because we are basketball players, doesn’t mean that’s our only platform. We need to understand that when most of us go home, we still are Black, in the sense that our families matter.”

Several WNBA teams postponed games that were scheduled for Wednesday night. They stood in solidarity with the nationwide protests taking place in the wake of Blake’s shooting.

Additionally, the NBA postponed the three playoff games also slated for Wednesday after players came together to organize a strike.

The Milwaukee Bucks led that effort as it was the first team to say it wasn’t going to participate in the playoff game originally scheduled against the Orlando Magic.

“We need to understand that these moments are so much bigger than us, and I really appreciate my team, for not only having my back, but for saying what they feel,” Atkins said. “It’s hard to say that type of stuff in these moments. It’s hard to be vulnerable in these moments. But I think if we do this unified as a league, it looks different. Because this league is close to, if not over, 80 percent Black women.”