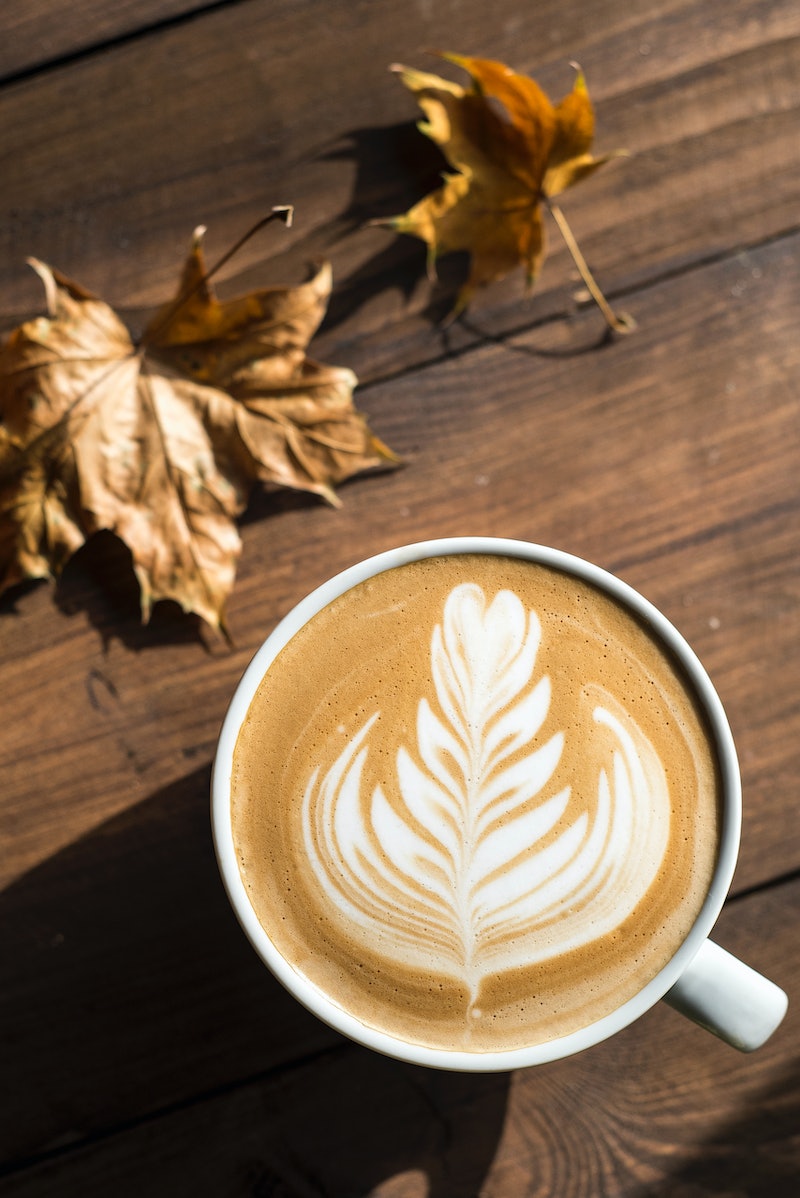 Pumpkin spice is generally cinnamon, nutmeg, ginger, cloves, and allspice. (Pumpkin generally refers to these spices' appearance in a pumpkin pie — it's not a component of the mix itself.) You can buy these ingredients all mixed up, or you can blend them together in your own preferred ratio. If you're looking at a pumpkin spice product — lattes, cookies, rum, deodorant — then the spices that are included will depend on whoever's making it.

Every pumpkin spice latté contains very, very, very small amounts of flavoring in powdered form, so you probably won't notice any change in your health from drinking a PSL all fall. But each of its components have been studied for their health benefits, and while any nutrition studies should be taken with a grain of, uh, salt (all our bodies are different, after all), it's interesting to learn what happens in your body when you drink a pumpkin spice latte.

Here are the health benefits of the spices in pumpkin spice.

When it comes to the beloved fall flavoring, ginger is the one with the most evidence for health-boosting powers. "Ginger contains polyphenols, which have powerful anti-inflammatory and antioxidant content," Kristen Carli, RDN, tells Bustle. Ginger has been known to help with nausea for a long time, Jennifer Bruning, RDN tells Bustle; one study published in Nursing & Midwifery in 2014 found that ginger capsules were more helpful than placebo for relieving churning stomachs in pregnant women.

Dr. Steven Gundry M.D. tells Bustle that ginger supplements have also been linked to reductions in muscle pain, according to a study published in Journal of Pain in 2010. "Taking ginger reduced exercise-induced muscle pain by 25%," he says. "This is likely due to ginger’s anti-inflammatory properties." That said, eating a slice of pumpkin pie probably won't help with health conditions. You'd be better off trying a ginger tea. (And, as always, be sure to check out any interactions ginger could have with other medicines.)

There have been multiple studies done on the potential health benefits of cinnamon, but there is nothing set in stone yet about it being beneficial to humans. For instance, one 2012 study published in Nutrition & Metabolic Insights showed that cassia, a relative of cinnamon, may help with controlling blood sugar levels, but a lot more research needs to be done.There's also the issue that, as a study in Clinical Pharmacology & Therapeutics in 2018 points out, scientists often test cassia instead of cinnamon; the two spices are related, but they're not actually the same. If a study says cassia has health benefits, your pumpkin spice beverage probably doesn't share them. (It is also possible, but rare, to have too much cinnamon and endanger your health.)

People have attempted to use nutmeg to treat stomach issues, cancer, kidney disease, pain, and more, but there's very little scientific evidence supporting nutmeg being used as a medicine for any of these. (On the other end of the spectrum, if ingested in large portions, it can be a hallucinogen.) Nutmeg can be used to make skin treatments that are reportedly effective for treating acne — of course, know if you're allergic or sensitive to any ingredients before trying anything.

"More research is needed, but studies suggest that cloves may be helpful in aiding gum health, as well as anti-inflammatory effects," Bruning tells Bustle. "Cloves also have anti-microbial properties." Cloves were historically used to treat toothaches because the chemical compound eugenol, which is found in cloves is an anesthetic and analgesic. The FDA downgraded the effectiveness rating of eugenol, though, so it's not something you should take for toothache. "Cloves contain powerful antioxidant content," Carli says. A study published in Antioxidants in 2018 found that cloves are among the most antioxidant-packed spices around.

Allspice also contains eugenol, as well as other compounds, but in smaller amounts than cloves do. It also contains gallic acid, an anti-inflammatory. It's been used in folk treatments for rheumatism and neuralgia, but there's not a lot of evidence for its medicinal impact.

Not all pumpkin spice lattés contain actual pumpkin, but since Starbucks added it to theirs in 2015, it makes the list. Pumpkins are high in fiber and provide a ton of vitamin A, which is good for eyes, skin, and fighting infections.

So, yeah, there aren't a ton of confirmed health benefits in pumpkin spice spices. And unless you're looking to treat nausea with ginger, you aren't going to feel any benefits right away, anyway. The actual pumpkin is the winner here.

More like this
Do Green Powders Work As Well As TikTok Says They Do?
By Carolyn Steber
The 11 Benefits Of Aerial Yoga, According To Trainers
By Carolyn Steber
All The Reasons Your Gums Bleed When Brushing Your Teeth
By Carolyn Steber
10 Primal Movement Exercises That'll Improve Your Mobility
By Carolyn Steber
Get Even More From Bustle — Sign Up For The Newsletter
From hair trends to relationship advice, our daily newsletter has everything you need to sound like a person who’s on TikTok, even if you aren’t.

This article was originally published on Aug. 27, 2018