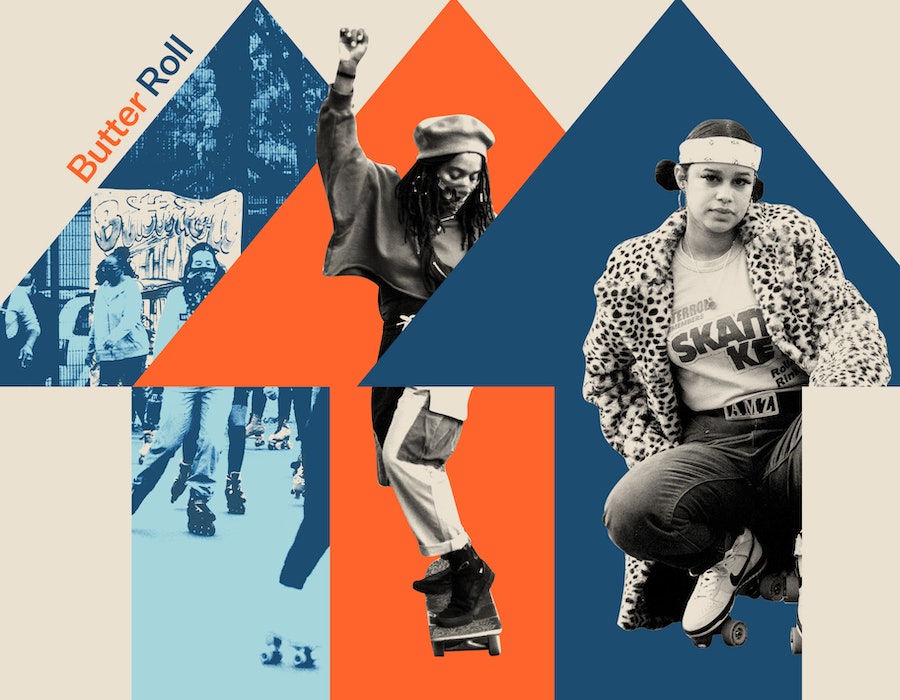 Photo: Flordalis Espinal
By Rachel Lapidos
Jan. 28, 2021
The Level Up

In "The Level Up," changemakers in the fitness and wellness industries tell us how they're making an impact in their communities, from pushing for inclusivity to promoting body acceptance and so much more. Here, Amy Collado discusses how roller skating inspired her to create Butter Roll, a social club centered around BIPOC wellness.

"One person said, 'This saved my marriage. It gave me a place to come and relieve my stress.'" Butter Roll founder Amy Collado is reading me quotes on the back of her newly-launched T-shirt design, which showcases a real yearbook-style commemoration of Skate Key, a long-shuttered skater rink from the Bronx, over Zoom. The testimonials capture exactly what Collado hopes to bring people through Butter Roll, her New York City-based skating community focused on BIPOC wellness and inclusion.

She developed her roller skating passion after hearing her mom's childhood memories of days spent at a rink. And in 2015, Collado decided to start her own club.

There is only one indoor roller skating rink in the New York City area, so to launch an entire club dedicated to the sport, Collado had to get creative with pop-up events in Prospect Park once a year. Then the pandemic hit.

“What COVID did was push folks who would have just skated inside, behind closed doors, to the outdoors for people to see," says Collado. Plus, she found that quarantine led more people craving movement, which is where her rollerskating community swooped in as a physical and mental release.

"By mid-summer of 2020, two things were happening: the rise of roller skating, juxtaposed against a lot of the revolutionary marches and protests that were happening," says Collado. "Roller skating and Black culture are very strongly connected, and it was really beautiful because it got a lot of us to take risks.”

Here, Collado tells Bustle how COVID changed Butter Roll, how she's creating space for people of all backgrounds, and how there's more to her community than roller skating.

Can you talk more about what happened to Butter Roll when COVID-19 hit?

People took on skating because it was a safe thing to do, and also an action. You don't really have to connect with anybody — you're constantly moving and it's almost naturally a six-foot-apart kind of thing, so I feel it was inevitable [to grow].

It also helped me take risks as a small business. I had only pumped my own money in and never made any returns, so receiving the PPP [Paycheck Protection Program loan] gave me that freedom of being like, OK, not only can I create my own merch, but I can also host my own events. That was the tipping point. Prior to COVID, I was very limited in where I could host my skate events, and then the world became open and fair game. It also allowed me to do an event without needing permits because of everything going on with the Black Lives Matter movement — the focus was less on whether everybody was following the rules, so we never got shut down.

What was the response like when you started throwing more skating events?

I was able to bring out so many people. It was really nice to see a lot of BIPOC people in a basketball court skating — all different backgrounds of people and different styles of skaters. We had people on scooters, on rollerblades. It was really beautiful. And I was able to feed folks and offer skate rentals. If we weren't skating, we were dancing or eating. It was a total vibe, and it was different than anything I had ever done before. If I had to describe 2020 in one word, it would be fearless. That's how I operated this summer. I just went for it.

Why is inclusivity and diversity important for Butter Roll's community?

Bill Butler created roller disco the way we know it in Brooklyn, in Crown Heights, at Empire Roller Dome. Many rinks, like the legendary place The Roxy, were the only places where rap and hip-hop could grow, because concert places weren't betting on hip-hop in the '70s and '80s. It's important that we always acknowledge and celebrate BIPOC contributions to roller skating as the world knows it. I had this vision where I wished I had more folks my age that look like me, so I took it as an opportunity to create it.

"Creating space is one of the strongest things we represent: of holding space for people that look like us, that talk like me, and use the same slang as me."

How is Butter Roll promoting wellness to its community?

The main way is emotionally. Roller skating is not only beneficial physically, but being active releases all those beautiful chemicals that our body naturally creates, which helps people feel better. But Butter Roll's way of doing that off the wheels is through music and by evoking calls to actions through connections to different ways they can support the advancement of skating. For example, the New York City Parks Department had a call about bringing a skate park to Orchard Beach in the Bronx, so we make sure our community knows about these events so they can get involved.

There's so much more to it than skating. Creating space is one of the strongest things we represent: of holding space for people that look like us, that talk like me, and use the same slang as me. To me, those small traits leave a huge impact in making someone feel seen and to see their own potential.

What are your plans for the future of Butter Roll?

When you talk about equity, people like me are very disenfranchised. Not having the type of support that we need to make [this sort of community] the norm is one of the things I'm really passionate about. Roller skates should be more accessible, but they’re really expensive. We’re hoping to offer quality skates while connecting newer skaters to the community through resources and information about what’s happening in the area. I really want to see more New Yorkers become skaters, and I hope to use this merch shop and the exposure to influence more people of color to skate, and [join] skate crews. I want people walking around with their crew jackets. I get really excited just thinking about that type of culture really thriving, and I think it's possible. People just have to know it's an option.