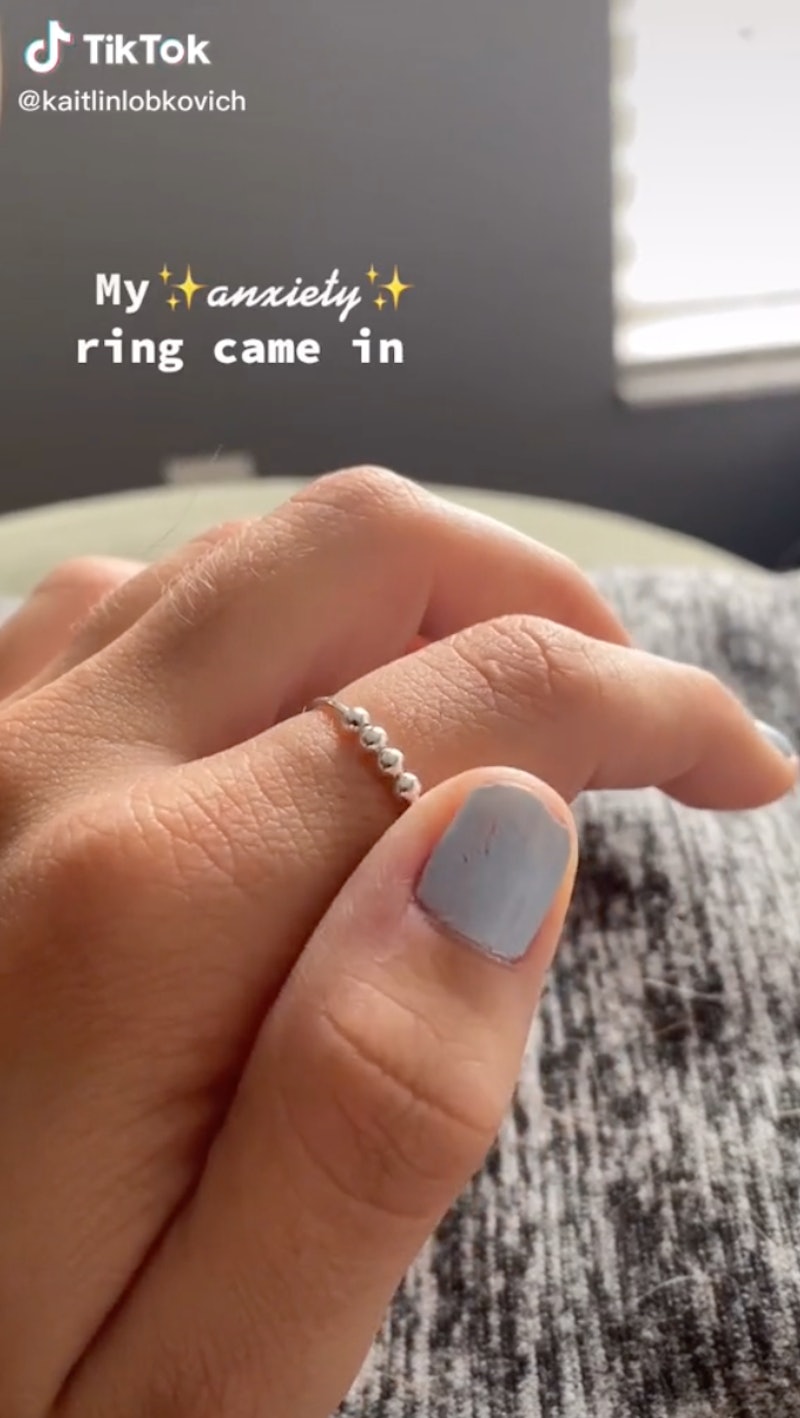 TikTok likes to have a quick fix for everything, wrapped up neatly in no more than three minutes. If you’re bad at styling your hair, then you need to curl it using socks, and if you can’t cook, then the answer is usually instant ramen, but with the secret ingredient of Kewpie mayonnaise.

That’s how I found out about anxiety rings, which claim to ease your worries by giving you something to fiddle with. TikTok’s omnipotent algorithm obviously has me pinned as the anxious type, and rings with moveable beads or metal loops have recently taken over my For You Page. As someone who fidgets a lot, often by picking at the skin around my nails, this quick fix interested me — and, with videos using the hashtag #anxietyring racking up more than 30 million views, it looks like I’m not the only one intrigued by some cute, problem-solving jewelry.

How Do Anxiety Rings Help Stress?

I don’t think I’ve ever gone a day without having a sneaky pick at my cuticles, especially when I’m feeling stressed. I often don’t even realize that I’m doing it — I’ll zone out, then suddenly realize that a thin trail of blood is snaking its way down my finger.

According to Nilu Ahmed, PhD, a behavioral psychologist at the University of Bristol, skin picking is a common response to stress or anxiety. “Skin picking diverts the brain from worrying by forcing attention to something else, and the repetitive action of picking can be soothing.” It can affect any part of the body, from the face to the hands or cuticles or legs, and can lead to bleeding or bruising, Ahmed says.

Ahmed explains that anxiety rings might help to reduce skin picking for those who, like me, can’t resist pulling on a ragged nail. “An anxiety ring can be useful in providing a tool for that repetitive action and provide a distraction for the hands,” she tells Bustle. That said, she is keen to emphasize their limitations, noting that it’s important to understand the underlying causes of anxiety to stop skin picking at its source.

Anxiety ring designs range from rings with simple metal beads, to rotating, patterned loops, and even tiny, moving butterflies and flowers, so you can choose to make a statement with your ring or keep it subtle and functional. They are surprisingly affordable: On Etsy, they start at $15 for a pretty, sterling silver piece, with gold-plated rings going for around $30. Even less expensive options are out there but, since cheap metals like nickel can cause irritation, you might want to pay an extra few dollars for something that won’t make you itch and pick your skin even more.

Using An Anxiety Ring For A Week

As soon as my own anxiety ring arrived, a slim silver band with three beads, I slipped it onto the middle finger of my right hand. Throughout the week, I wore it in several situations that would usually trigger my anxiety to see if I could give my cuticles a break.

After finding out that none of my friends were free to hang out, a Friday night on my own would usually make me spiral into an evening of self-doubt. Determined not to let that happen, I queued up an episode of Below Deck and spun the beads around, in an attempt to distract myself both mentally and physically. I wouldn’t say I felt great, but I did feel more balanced: Playing with the ring was like steadying a yacht sailing through rough seas.

Three days later, I went to the theatre. Although I love watching plays, I struggle to stay still for long periods of time without tapping my feet or rearranging my seating position. Pushing the beads on my ring back and forth silently satisfied my restlessness without disturbing my fellow audience members.

Towards the end of the week, I had a few very busy workdays lined up, which are usually a recipe for some damage to my skin. Although wearing my ring didn’t stop me from feeling under pressure, fiddling did make a good alternative to destroying my nails as I agonized over my emails.

How I Felt After Using An Anxiety Ring

My nails are far from perfect, but getting better. When I start to absent-mindedly pick at them, it only takes a few seconds until I notice a flash of silver as the light catches on my ring. Sometimes that’s enough time to do a little damage to my skin, but more often it’s early enough to avoid any real harm. I calmly tell myself to stop — sometimes consciously saying the words, “We don’t do that any more” in my head, as if speaking to a mischievous child — and take a deep breath. Then it’s time to play with the ring, and my brain tingles with satisfaction as I slide the beads along one by one. If I invest in a reparative cuticle oil, there might be hope yet.

Even just having the ring on reminds me to be aware of how I am thinking and feeling. I don’t even have to be picking my skin to feel the benefit. When I feel my mind straying towards my anxieties, I remind myself that I have a distraction right there on my hand. It gently pulls me back into the present, away from the cacophony of insecurities, grounding me as I count: “One bead, two beads, three beads.” The more I practice doing this, the faster this reflex becomes an instinctive response to worrying.

On the nights when I lie in bed, sliding the beads up and down, I like to think about how many other people might be repeating a similar ritual. Maybe they’re also using an anxiety ring, or maybe they have a fidget spinner or even a rosary. Though experts mostly don’t recommend numbing your brain by scrolling through your For You Page, very occasionally, TikTok does throw up a simple yet smart anti-stress remedy that won’t cost the earth. Thanks to anxiety rings going viral, I have something other than picking to distract myself with, quieting my racing thoughts and easing my feeling of constantly being on edge. And, in true TikTok fashion, it looks pretty neat too.

Nilu Ahmed, PhD, a behavioral psychologist at the University of Bristol