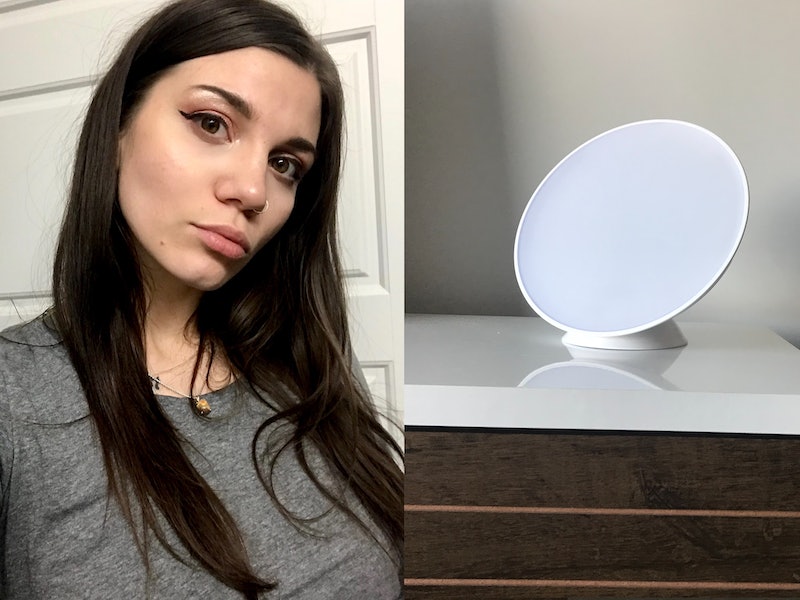 I am someone who is perpetually tired in the mornings, even with four shots of espresso and seven hours of sleep. On top of living with chronic health issues, I’m a night owl through and through — and during the dark, cold winter, especially so. With so much hype around light therapy lamps as a non-prescription treatment option for people who experience mood shifts and fatigue during the winter months, I knew I had to give it a shot to see if it would give me a boost.

Seasonal affective disorder (SAD) is a type of depression that ebbs and flows with the seasons. It’s four times as common in women as in men, per a 2015 study published in Depression Research & Treatment, and more prevalent for people who live in northern climates, affecting around 9% of Alaska’s population and 1% of Florida’s. The symptoms are similar to regular depression: lack of appetite or motivation, poor sleeping, negative mood. It’s thought that lack of exposure to sunlight is a contributing factor — ergo, enter light therapy.

Though light therapy is traditionally used as an adjunct therapy for people who have SAD, research has shown light therapy may also help treat nonseasonal depression, bulimia, bipolar depression, and even symptoms of borderline personality disorder. As someone diagnosed with both borderline personality disorder and bipolar II disorder, I decided to buy a lamp to try at home. I went with the Circadian Optics Lampu Light Therapy Lamp, which retails on Amazon for $59.99, has over 600 reviews that are overwhelmingly positive, and a 4.5-star rating. Circadian Optics makes several different light therapy lamps with similar ratings, and hundreds of more reviews; I just liked the shape of this particular lamp.

According to Circadian Optics’ website, the Lampu was designed to “help beat the winter blues, circadian sleep disorders, shift work adjustment, and fatigue.” It puts out 10,000 lux full-spectrum LED lighting that’s U.V. free, and that “closely mimics the qualities of natural sunlight.” What’s more, the lamp itself has three different settings so you can change the brightness and intensity. For optimal use, the directions recommend placing the lamp eight inches to two feet away from you, off to the side, and using it some time during the A.M. They also note that most people find 15 to 60 minute sessions to be their sweet spot.

For the first couple of days, I tried to follow these directions pretty strictly to get a general feel for the lamp. I turned it on around 9 A.M., set it on a table, and planned for 30 minutes of light therapy while I drank my coffee. I know the point of a light therapy lamp is to jumpstart your day and energy, but somehow I didn’t expect just how bright it would be. I set the lamp two feet away from me, but after a few minutes on the highest brightness setting, I chose to turn it down to medium. After the half hour, I felt a little more awake.

A few days into using the lamp regularly in the mornings, my city was hit with a small winter storm and a blanket of smog that covered the city. I got to really see if the Lampu could help kick my circadian rhythm into gear on a dark winter day. I definitely felt like it gave me a small boost — almost like getting an extra shot or two of espresso in your latte, without experiencing the nasty side effects of drinking too much caffeine. Though the lamp doesn’t compare to the feeling of natural light you get from waking up to the sunrise, I did feel less grumpy (and less groggy) about the blizzard brewing outside my window.

About halfway into my week-long test, I began playing around with the time of day I used the Lampu. Like many people, I get that 2:30 feeling on almost a daily basis, and it’s often worse in the winter. I added for a half hour of light therapy time for the afternoons, but kept the setting on the lowest brightness. I’m happy that I switched it up, because opting for the light therapy a tad later in the day actually seemed to be most effective for me. It helped me get through the afternoon lull without resorting to a second cup of coffee or a nap. I didn’t feel my eyes were as strained by the light box, and I felt more energized than I had when I was using it in the morning.

By the end of the week, I got into a groove of using it for about 15 minutes in the morning to supplement my morning coffee, and also scheduled a 30 minute session around 2 P.M. As the week moved along, I felt more energized by the lamp each day, and definitely felt a decrease in my sensitivity to the brightness.

A SAD lamp or sunlight generally isn’t a cure for the winter blues on its own, though. As Mayo Clinic psychologist Craig Sawchuk, PhD, LP, previously told Bustle, “Sunlight is still a good thing, but typically we want to emphasize additional factors, such as maintaining a normal daily routine, the sleep-wake cycle, regular nutrition, social rhythms, getting physical activity and exercise.” Working with your doctor or therapist can help you figure out what kinds of treatments might make the most difference to your mood, on top of these kinds of self-care.

If you’ve ever wanted to try a light therapy lamp — whether for a mental health issue, or just to give yourself a boost of energy before work — it’s worth discussing it with your doctor or therapist. Light therapy lamps aren’t a cure-all for fatigue or depression, but as someone with both, I'll keep on using it on top of my regular mental health care routine.

This article was originally published on Dec. 20, 2018