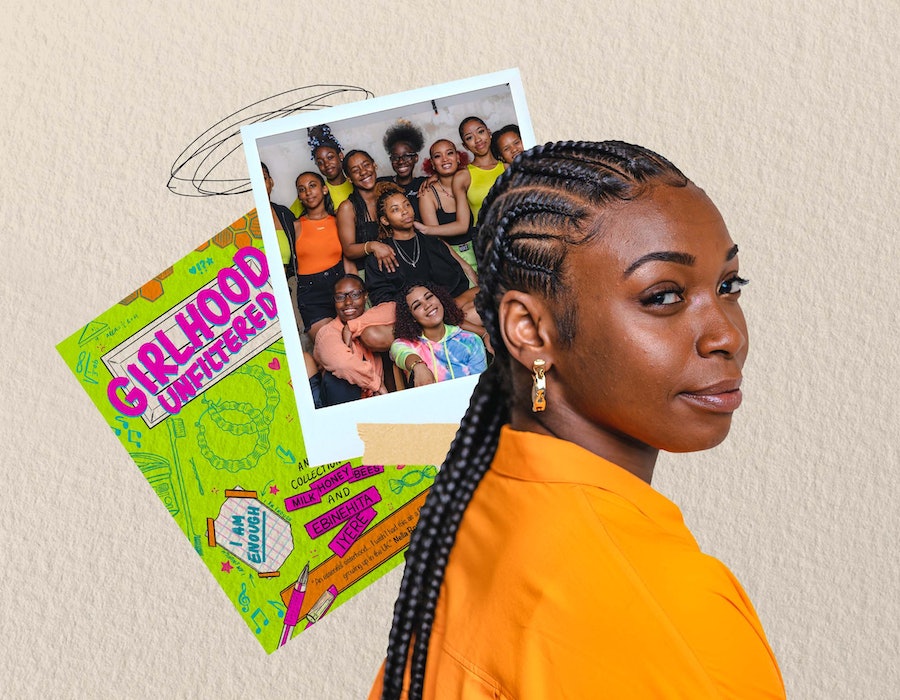 Aashfaria A. Anwar
We may receive a portion of sales if you purchase a product through a link in this article.

It takes minutes after walking into the Milk Honey Bees headquarters in Brixton to understand the drive and vision behind the South London-based organisation. Set up by Ebinehita Iyere, Milk Honey Bees provides a creative and expressive safe space for young women and girls, especially those affected by both the education and criminal system. In the five years since launch (and what a challenging five years those have been) Iyere has teamed up with Sony, Barbie, and The Black Girl Global Justice Initiative, to name but a few. Today I am here to discuss their latest project, but first, there’s introductions to be made.

No sooner are Iyere and I walking through the door that she is welcoming the girls with a squeeze (and some chastising for poor attendance); informed them that I’m “cool” and a Capricorn, like her (critical information); and outlined upcoming educational and social initiatives she’s working on for them. The phrase “wearing many hats” doesn’t begin to cover it. Since 2017, Iyere has simultaneously been a third-sector employee, a youth worker, a project manager, an educator, mentor, counsellor, and friend. And, as of this month, she and her girls have a new title to add to their CVs: author.

Published by Knights Of Girlhood Unfiltered is a moving anthology of essays, letters, and creative expressions illustrate what girlhood looks like to 20 Black teenage girls from South London. The book, like Milk Honey Bees itself, focuses on three tenants: Healing, Empowerment, and Resilience. Through a number of first-person narratives and essays, the book traverses a number of topics, including the adultification of Black girls, their experiences at home and school, and an honest examination of what it means to them to be joyous and feel free.

“I commend Knights Of for the way they did [the book] with us,” Iyere tells me as we settle into her office with Shay Ashworth, Shannon Goode, and Jaala Shaw, three of the contributors who are slowly getting used to being peppered with questions by journalists. “Not many publishers could withstand what this came with,” she explains. “It was more than just getting these girls together and writing. There were actually writing workshops... and constructive, passionate discourse.” There were tears, too, she adds. And challenges. There were days where girls didn’t turn up, GCSEs, general life... all whilst the girls dug deep to offer their voices and experiences, often maligned, or not sought out in discussions on what it means to be a Black girl today, as evidenced by public reactions to the ongoing Child Q investigation.

Working on Girlhood Unfiltered demanded a new kind of vulnerability. Shaw, a quick-talking 16-year-old, sparks laughter from the room when she whips out her pre-prepared notes on her phone. “I was reading everyone else’s [essays] and now it feels weird. I feel like I can’t look at people no more,” she exclaims, “I know too much. It’s like I’m looking at everyone naked now, I don’t like it!” Another round of giggles, naturally.

Her essay, If My Walls Could Talk, traces a typical school day and the walls that surround her, whether that be the safe walls of her bedroom, or the confining and containing walls of secondary school. Shaw found that the excitement she once felt about lessons was replaced with apprehension at being constantly observed. “I think a lot of my healing took place in my room,” she tells me. “It’s the place I felt safest and, when I was out of school for a year, it was where I spent all my time.” Those walls came to symbolise security.

Ashworth, a softly-spoken 18-year-old, also needed convincing. “When Ebi first told me about the writing thing, I didn’t want to do it,” she ruefully admits, “because, in my head, I don’t know how to write.” Ashworth prefers to use dictation to translate thoughts to text, and penned Identity Crisis Of A Misfit that way. Her essay grapples with her journey of self-expression through clothing, feeling limited to the women’s section, longing for the roomy joggers and baggy hoodies in the men’s, and no longer being seen as innocent when she started dressing the way she wanted to. As a result of her creative process, humour is infused throughout. “That’s how I talk and I think I talk quite sarcastic and I guess that comes across,” she says with a wide smile.

Throughout our conversation the search for comfort, be it with their bodies or their wider environment, is a frequent theme. Goode’s 11 Stops traces the train journey from school to where she feels most at home: Brixton. The conscientious 17-year-old is the daughter of Winston Goode, the founder of MHB’s parent charity Juvenis, and takes her time to give measured answers to my questions. “In my essay, I talk about how where I live is not necessarily where I’m most comfortable, so I wanted to take it back to a place where I’m comfortable all the time, any time of the day,” she tells me. “So I thought, how long does it take me to get to Brixton? How long does it take me to see the people who make me feel comfortable? It takes me 11 stops, it takes 31 minutes.”

As eloquent as Goode is, I admit to her that I’m somewhat distracted by her pointed fluorescent pink and lime green nails, matching the cover of the book. The uses the freshly done set as punctuation, adding emphasis to her words, a language extension girls like me know all too well. The nails (and Ashworth’s pink and lime durag), are all part of the uniform the girls will don at the book’s launch party taking place at House of Vans a few days after we meet.

Back on Goode’s essay though, perhaps the most touching part is how, like many of the other essays in the book, it doubles as a love letter to Milk Honey Bees, Iyere, and what they’re all building together. “By being a part of Milk Honey Bees, it has given me a space to gain more recognition of the things that happen to me in everyday life and be more in touch with allowing myself to feel emotions and not just push past them,” writes Goode. “I'm realising that it's okay to feel and be at peace with your emotions, rather than feeling wrong for embracing them.”

The gratitude these young adults have for Milk Honey Bees, and for its founder who they lovingly call “Ebi” is indisputable. When Iyere steps out of the office to help another girl, I quickly ask the young writers more about her impact on their lives. “Every time we do something, Ebi will say, ‘Girls, I’m doing this for you, you did all this,’ but I have to keep reminding her that” – Goode pauses to shoo Iyere through the door’s window – “if it wasn’t for you, we wouldn't be here. If she didn’t start Milk Honey Bees, none of us would be writing. There’s so much we wouldn’t have been able to do without her. So I keep telling her ‘you literally just set the foundation, we’re building off of you.’”

As the girls predicted, when Iyere is finally granted access to the room again and I quiz her on how it feels to read and hear how her mentees feel about her, the youth worker and PhD student prefers to shift the focus onto what they have all created together. The knowing look between Shaw and Goode says it all, capturing the very specific blend of frustration you reserve only for those who are truly special to you.

We wrap up our conversation, I thank Iyere and her girls for allowing me to grill them at the end of a long day and head back out into the early darkness that has now descended upon Brixton. Heading towards the now illuminated arches, a Black woman who was once a Black girl, I feel warm. The Black girls coming after us are finding their voices and Girlhood Unfiltered insists that you listen to them, on their own terms.

Girlhood Unfiltered by Milk Honey Bees and Ebinehita Iyere is out now, published by Knights Of. Milk Honey Bees can be found on Instagram and Twitter. You can also support and donate to the work Iyere and her team does via GoFundMe.