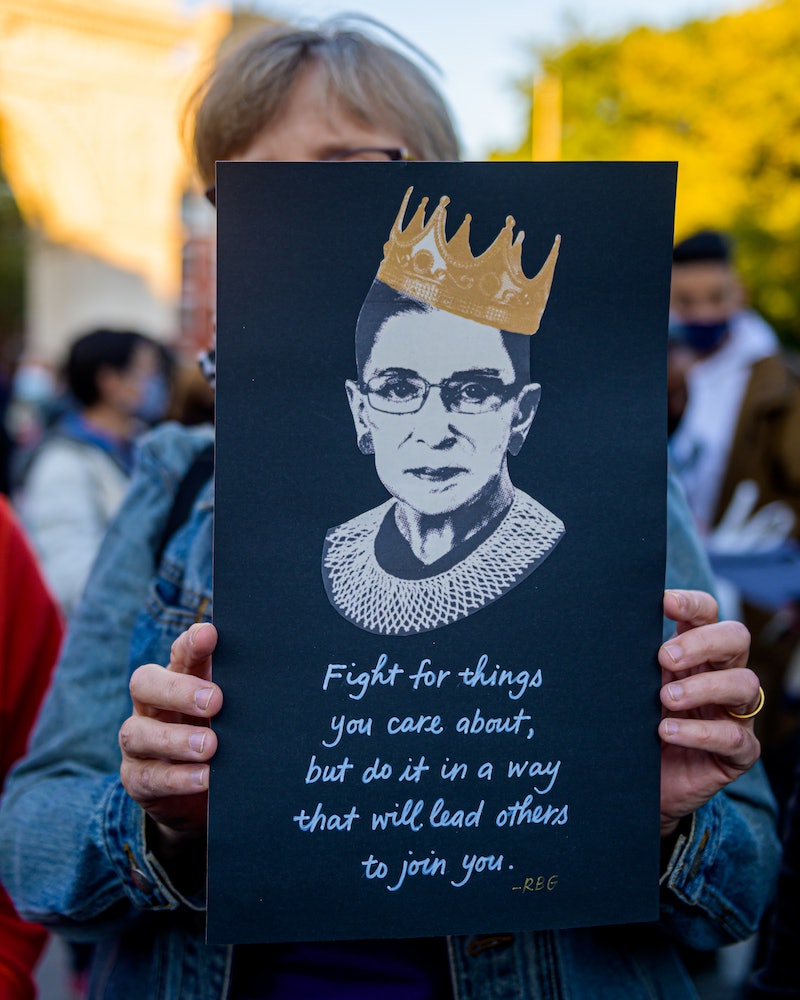 The death of Supreme Court Justice Ruth Bader Ginsburg on Friday Sept. 18 at the age of 87 was a blow to millions of people across America. And as many publicly responded with overt grief, you might have experienced a strange and unexpected sensation: fear. You might have heard of the five stages of grief, otherwise known as the Kubler-Ross Change Curve: denial, anger, depression, bargaining, and acceptance. But where does fear fit into your reactions to RBG's death?

"Fear is often a response to death or loss that many people do not anticipate experiencing," Angeleta Boyce L.M.H.C. N.C.C., a psychotherapist with therapy access network Alma, tells Bustle. Fear, she says, can spring from uncertainty, lack of control, and feelings of isolation in grief. And all of those elements can play into how you're feeling right now.

Your fear might be driven by uncertainty about the bigger picture. The Republican effort to replace RBG with a conservative Supreme Court Justice, creating a supermajority on the bench, may have far-reaching implications for gender equality, reproductive rights, the status of immigrants, and other fundamental rights. Meanwhile the BBC reports that President Trump refuses to guarantee a peaceful transfer of power following the election, just six weeks away.

Boyce says that this kind of instability can spark dread in grieving people. "Intense fear can be rooted in the lack of certainty death or loss brings to our lives," she says. People worry about how they'll cope in the future after a key person in their life dies, she says. RBG's death throws a lot of cards up in the air, and that's a very unsettling feeling.

Just because you didn't know RBG personally doesn't mean you won't feel her death intensely. "We experience the loss of a person’s leadership, knowledge, and the role they played in our lives and society," Talkspace therapist Liz Kelly, L.I.C.S.W., tells Bustle. "The death of a significant individual can challenge our sense of safety and security and bring up concerns about how our lives and communities will be impacted by the absence of this person."

You may also be worried because the consequences of her passing feel uncontrollable. "Fear is a common grief response, because loss reminds us that there are things outside of our control," Kelly says. "The death of an important person may bring up thoughts of our own mortality or the fact that loved ones close to us will not be here forever." While there are definite things that you can do to carry on RBG's legacy and influence the Supreme Court's future — vote, for one thing — the unpredictable nature of the world might weigh on you.

In the age of COVID-19, fear is also changing the way we grieve by making us more isolated. A study in Basic & Clinical Neuroscience in 2020 argues that grief right now is often "incomplete," in that people can't move through the five stages in standard ways with funerals, public mourning, and other rituals. There's an atmosphere of fear around, the researchers say, making it more difficult to seek comfort from others. A simple hug might be out of the question, and that can make dealing with your feelings around RBG's death even harder.

To deal with your worries about the consequences of RBG's passing, Boyce says, it's a good idea to connect with others where you can. "Learning that we are not alone in these feelings can be comforting and help a person to be gentle with themselves while they process their fears and anxieties," she says. "In grief, the natural tendency is to isolate, but utilizing your support system is a critical element of coping." She recommends allowing the space for your emotions to exist, including worry or panic. Kelly suggests focusing on things that are in your control, like calling your Senators and making sure that everybody in your life is registered and prepared to vote. "Find meaningful or creative ways to honor the loss," she says, whatever that might mean for you.

And if you're experiencing symptoms of intense fear, like nightmares, panic attacks, or intrusive thoughts, Boyce recommends speaking to a grief professional. "They can help decipher the underlying cause and provide strategies to learn how to cope with them," she says.