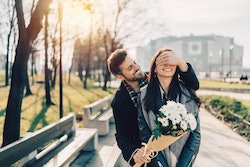 Sex and the City’s Charlotte York, How I Met Your Mother’s Ted Mosby, and The Big Bang Theory’s Raj Koothrappali are some examples of hopeless romantics we know and love (no pun intended). Hopeless romantics love love, and when they fall, they fall hard, which comes with its fair share of pitfalls. Curious to know if you’re a hopeless romantic? Dr. Darcy Sterling, an NYC-based relationship therapist and host of E! Network’s Famously Single, and Dr. Joanne Frederick, a licensed mental health counselor and author of Copeology, explain what it means to be a hopeless romantic, whether it’s healthy to be perennially hopeful, and the key differences between a hopeless and a hopeful romantic.

What Does It Mean To Be A Hopeless Romantic?

“A hopeless romantic is someone who remains optimistic about the possibility of love, even after they’ve had their hearts broken,” Dr. Sterling says. “They never become that jaded adult who sees the world through a skeptical lens.”

Dr. Frederick adds that a hopeless romantic’s relentless optimism means they are on a forever quest to experience their own big, cinematic love story with a happily ever after and have likely been planning and imagining their dream wedding since a young age. “Hopeless romantics love being in love and think that love must have fairy-tale qualities,” she says. “They probably believe in love at first sight and are waiting on that one perfect partner who will one day sweep them off their feet, living in constant hope that their ideal love story will play out eventually.”

What Are Examples Of A Hopeless Romantic?

Falling in love very quickly is one telltale sign of a hopeless romantic. “They fall fast and hard for the attractive new follower or a suitor on a dating app and let themselves get enveloped by learning everything about them,” Dr. Frederick says.

Dr. Sterling adds that this enthusiasm for a new potential partner begins before there’s even a concrete reason to imagine a future together. This can be a turn-off to the person they’re just starting to date because it can come off as too intense. And, Dr. Sterling says, this excessive enthusiasm ultimately sets a hopeless romantic to be disappointed and devastated if the relationship doesn’t last.

That said, Dr. Frederick notes that although hopeless romantics tend to idolize their love interests, it’s usually not because they love the person per se but rather the feeling. “Hopeless romantics are more likely to throw themselves into spontaneous scenarios just to experience the love they crave,” she says.

Is It Healthy To Be A Hopeless Romantic?

So, is being a hopeless romantic a good or a bad thing? The short answer is it depends. According to Dr. Sterling, everyone gets their heart broken at some point, and being hopeful about finding love is indeed a healthy thing. Not being hopeful, she says, won’t protect you from getting hurt in the future.

On the other hand, Dr. Frederick says a hopeless romantic‘s unrealistic look at love can lead to unhealthy behaviors such as settling for less than what they deserve or being relentless about making a relationship work even when it’s clearly not a good fit. “One may be so determined to see their partner in a good light, they ignore any warning signs from them,” Dr. Frederick says. “This can trap a hopeless romantic into an unhealthy and potentially abusive relationship.”

Furthermore, Dr. Sterling adds that hopeless romantics over-value being in a relationship, which can make being single difficult for them to tolerate.

Hopeless romantics may also struggle with making long-term relationships last. “While it's perfectly normal to indulge in the idea of a once-in-a-lifetime fairy tale love, it can actually keep you from forming a deep and lasting connection,” Dr. Frederick says. “ Rather than working through any conflicts that come to light, they quickly call it quits, taking it as a sign that things aren't meant to be. This makes it nearly impossible to learn the skills necessary to maintain a healthy relationship.”

The Difference Between A Hopeless Romantic & A Hopeful Romantic

The biggest difference between a hopeless and a hopeful romantic is their perspective. You might still believe in relationship destiny, but you’re more realistic. As Dr. Frederick explains, “Being hopefully romantic allows you to look at relationships in a healthier manner, realizing you can learn to grow with the person rather than forcing you two to stick regardless of compatibility.”

For example, Dr. Frederick says a hopeless romantic may view a conflict in a relationship as wrong. In contrast, a hopeful romantic sees it as a challenge to overcome that can make the relationship stronger.

Put another way, Dr. Sterling says a hopeful romantic is hopeful but not blind to evidence that a partner isn’t right for you. “You’re grounded in reality and willing to see the truth in people,” she says.

The good news is it is possible to go from being a hopeless romantic to being a hopeful romantic. To do so, Dr. Sterling recommends extracting the lessons from every breakup, applying them to future relationships, and remembering to pace yourself when dating someone new. Therapy, she adds, can also help you better understand your relationship patterns and learn how to heal them.

And perhaps most importantly, Dr. Frederick says that working on falling in love with yourself creates a solid foundation to build a fulfilling relationship with someone else. “People often spend their lives searching for the perfect partner, but the real love story is cherishing yourself,” she says.

More like this
Bumble's "Compliments" Feature Lets You Message Before You Match
By Lexi Inks
The Pros & Cons Of Dating A Coworker
By Lexi Inks
Do I Have To Tell My Crush That I Slept With Her Ex?
By Sophia Benoit
Are Capricorn & Aquarius Compatible In A Relationship? Astrologers Weigh In
By Kristine Fellizar
Get Even More From Bustle — Sign Up For The Newsletter