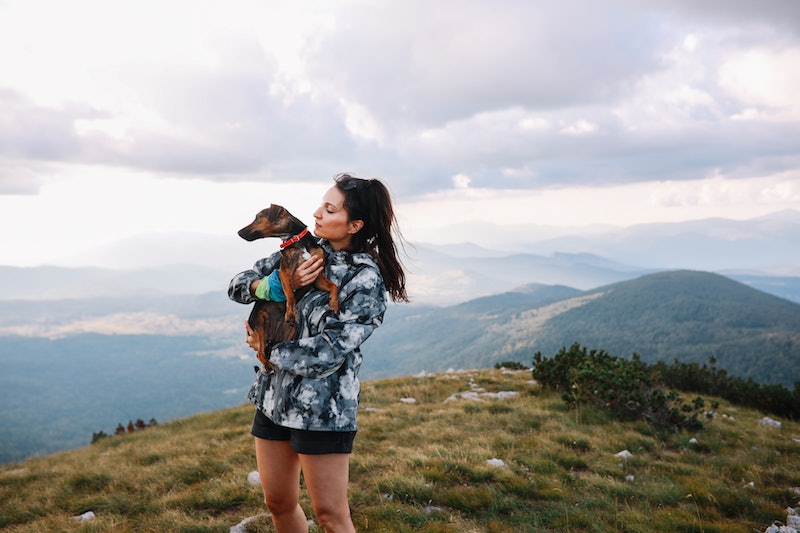 Prior to March, Elizabeth, 32, would have described herself as "not a dog person." Though she enjoyed visiting other people's dogs, she couldn't wrap her head around loving a dog so much you're happy to clean up its messes. When the pandemic hit, with much more time on her hands and a desire for companionship, she felt moved to adopt Miles, a terrier. "I can't imagine life without him now, but if there wasn't a pandemic, I would not have bought this dog," she tells Bustle. "I don't even gag when I pick up his poop anymore. I don't recognize myself."

Since the start of the pandemic, there has been a major increase in the sales and adoptions of dogs. People who always wanted a furry friend finally have the time and WFH setup needed for puppy-rearing. But more surprisingly, there's a cadre of people who, pre-pandemic, had no interest in becoming dog parents. Suddenly inspired to sign up for the job, they find that their personalities have changed entirely since getting a dog.

Before rescuing her Australian Shepherd mix, Emily, 33, was very strictly "anti-dog," thinking they were dirty and destructive, on top of not providing conversation. Now, she says, "I am much more sensitive and tender than I have ever been." Emily now believes dogs to be highly communicative, and "far less destructive than people," adding that she now also avoids consuming animal products.

According to neuropsychologist Dr. Marian Rissenberg, Ph.D., the pandemic's effect on our social connectedness has left people bored and lonely. "A dog can provide entertainment, company, and affection," Rissenberg says. "We are hardwired to bond with other beings who are dependent on us and appreciative of our care, and dogs have the added benefit to us of supporting our mindfulness," she says. "They have very small frontal lobes and thus live in the moment," meaning, unlike people, they're not thinking about the big picture or holding grudges. "They are happy if their basic needs are met, and when they’re happy they make us happy too," she adds.

"He brings unexpected moments of joy to my day that didn’t exist before — not that my days were joyless before but now they’re punctuated by the cute things he does," Elizabeth tells Bustle, adding that "never feeling alone" is a bonus. "I feel more whole now, and like I've become a more loving person," she adds.

"I never thought I could love anything this much — I guess I'm a dog person now."

The hormone oxytocin, which is involved in pair bonding and offspring nurturing, is responsible for some of these changes, Rissenberg explains. When you interact with a dog (or a partner, or a child), your brain sends oxytocin from your hypothalamus out to the rest of your body, triggering loving feelings. The changes that are caused by introducing a dog into your home and heart are neuro-chemical and not structural, meaning they are not permanent. That said, Rissenberg explains that learning itself changes brain circuitry. "An experience that shows us a different side of ourselves, or gives us a different perspective on life or the world, will change us," she says. "I would not say that the experience of falling in love with a pet makes us more kind or patient with other beings, however, being happier does," she says.

And studies show that dogs make people happier, and healthier. In addition to triggering the release of oxytocin, hormones like serotonin and dopamine are all activated when you start bonding with a dog. According to neuropsychologist, Dr. Sanam Hafeez, Psy.D., "the mere act of petting an animal will have a positive effect in your cingulate cortex, where the ACC, (the anterior cingulate cortex) processes emotions, empathy, and impulse control." When you pet a dog for a long period of time, the brain releases serotonin and dopamine. "Serotonin is the hormone responsible for your mood, social skills, sleep, memory, and more," Hafeez says, adding that happiness is also under its purview. "Dopamine is known as the reward hormone as it regulates pleasure and emotions." Together, these three hormones make you feel deeply connected to your pet, while increasing mood. "Dogs also have a positive effect when combating stress as they help stabilize heart rates and reduce cortisol levels, which make you irritable or anxious," Hafeez adds.

The more time you spend with your pet, the more you promote your own happiness. At the same time, the "activating" effect of adding a dog to your lifestyle will, according to Hafeez, help to create more lasting changes.

Still in the early throws of puppyhood with Miles, sleepless and currently battling a flea situation, Elizabeth says, "I never thought I could love anything this much — I guess I'm a dog person now."