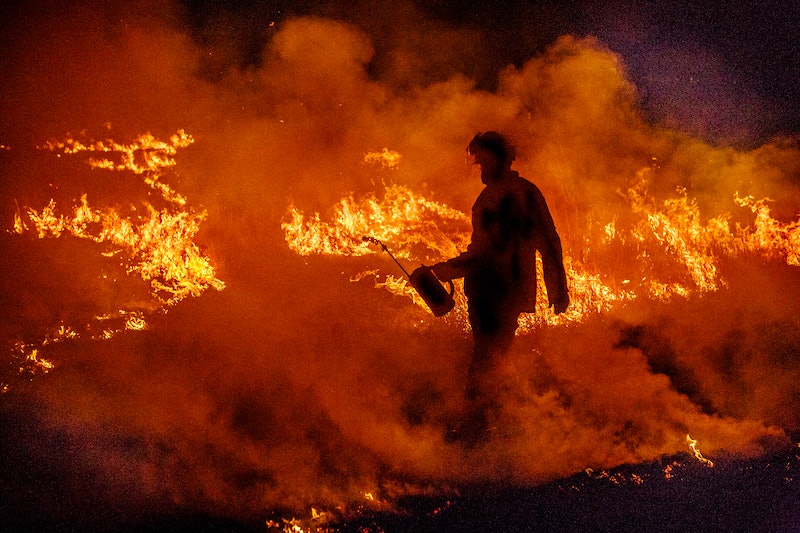 The wildfires currently ripping through the West Coast seem like the apocalyptic cap on a catastrophic 2020. In Washington, Oregon, and California, an area the size of New Jersey has burned, killing at least 33 people and displacing tens of thousands of people. Now, because of cross-country winds, smoke from the wildfires has moved as far east as New York and Washington, D.C., according to the National Weather Service and BBC. Even if you're not close to the physical fires, wildfire smoke can affect your health, carrying particulates and gases into your lungs.

"The smoke from wildfires is potentially harmful to everyone," Dr. Norman Edelman M.D., a pulmonologist and professor of internal medicine at Stony Brook University, tells Bustle. "Even people without respiratory conditions will have their upper airways irritated by the smoke, causing eye, nose and throat irritation."

"We can expect these effects to be widespread but worse closer to the fires; a haze is already atop New York City," Dr. Edelman says. The haze 20,000 feet above New York and D.C. is too high to cause health issues, according to meteorologists, as it's carried by the jet stream, but your local air quality authority will issue alerts if it's affecting your area.

"Wildfire smoke consists of a combination of gases with a large concentration of small particle pollution," Dr. Francis V. Adams M.D., associate professor of clinical medicine at NYU Langone Health, tells Bustle. There are two kinds of particles in wildfire smoke that cause health problems, according to the Environmental Protection Agency (EPA). Fine particles can penetrate deep into a person's lungs and potentially be absorbed into the bloodstream. Bigger particles can't be absorbed, but they can irritate your lungs, nose, and throat, and make it harder to you to expel other irritants like pollen. Either type is bad news, even if you're otherwise completely healthy. The fine type can be carried a long way by wind, says the EPA, which is why haze appears over cities many miles away.

Two things increase your risk of health complications from smoke, Dr. Edelman says: the closer you are to the fires, and any pre-existing lung or heart conditions. "Those with chronic respiratory conditions such as asthma and chronic obstructive lung disease are at risk for exacerbation of their conditions," he says. People with these illnesses are at high risk of hospitalization, and even if they get through smoke-induced episodes, Dr. Edelman says, the wildfire smoke may also reduce their lung function over time. People with asthma need to be wary of smoke haze, even if it's light and has traveled a long way, because they'll be highly sensitive to its particulates.

COVID-19 adds an additional risk factor. Many people who had relatively mild cases are still experiencing difficulties with breathing and lung function months after they were first diagnosed. "We don't know how these effects will interact with COVID-19 infection, but multiple insults to the lungs at the same time cannot be good," Dr. Edelman says.

How To Protect Yourself From Wildfire Smoke

The closer you are to the fires, the more at risk you are. And the masks you've been wearing diligently for protection from COVID-19 will likely not help. The EPA says that paper dust masks, surgical masks, and scarves and bandanas, wet or dry, can't protect against the fine particles in wildfire smoke. An N95 mask, if you have one, is the only thing that can actually offer protection, because it's designed to filter out small and large particulates.

If your area is close to the fires and you're not evacuating, experts recommend staying inside with the windows shut and an air purifier running, and making sure your air conditioner isn't circulating outside air into your house. Keep everyone in your family inside, too. "Even our pets can be severely affected by exposure to wildfire smoke," Dr. Adams says. And if you start to experience breathing difficulties, even if the fires are miles away, don't wait; get medical help immediately.