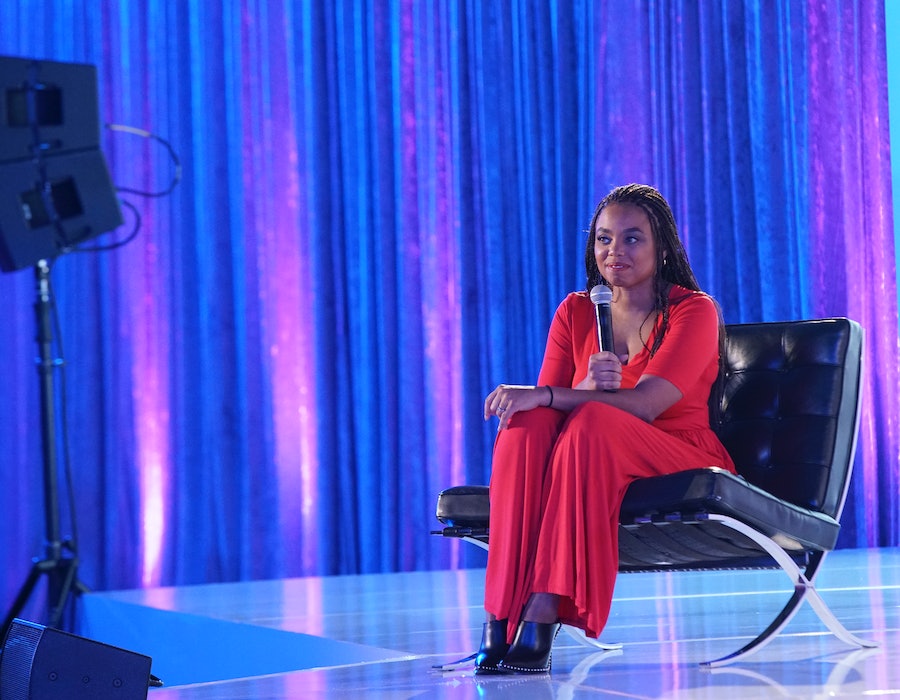 In this exclusive excerpt from Uphill: A Memoir by Jemele Hill, the Emmy Award-winning journalist reflects on why having an abortion was the right choice for her.

My default is to pour all of my energy into my career — it’s one of the few things I’ve been able to count on to be my safe haven. People have let me down. My career never has.

During college, I was methodical with how I built it. I did a series of internships, including at the Lima News and the Detroit Free Press, and after graduating from Michigan State, I accepted an internship at News & Observer in Raleigh, North Carolina. After the internship ended, the Observer hired me on as a full-time general assignment sports reporter, with a starting salary of $24,000.

Almost two years later, my old hometown paper, the Detroit Free Press, offered me a nearly $20,000 pay raise, and an opportunity to cover Michigan State’s football and basketball teams. I moved back to Michigan.

It was rare for a 24-year-old Black woman to have the job that I did. My sports journalism career was off to a near-perfect start. I was young, happily single, and looking to focus strictly on my career. But that didn’t last long, and I soon found myself in an unexpected relationship.

I did not grow up with a lot of examples of healthy, Black love. Instead, I grew up witnessing broken people stuck together for all the wrong reasons, and I adopted the misguided belief that you had to tolerate a certain amount of unhappiness if you ever wanted to find anything lasting. I wasn’t down with that.

Once when my mother, my aunt, my grandmother, and I were together, I jokingly said, “Do you know that between the three of you, y’all been married eight times?” They didn’t laugh.

As a young adult, these examples caused me to exercise extreme caution when getting involved with men. I didn’t like feeling vulnerable.

My high school and college boyfriend, Chris, and I dated seriously for a little over three years. I thought I would marry him eventually, but as we started to settle into adulthood, I soon realized that we wanted different things in life. I wanted to explore the world, and Chris was content to go back to Detroit, and build a life there. He wanted to be like his parents and grandparents, who’d been together forever, lived most of their lives in Detroit, and had raised kids and grandkids there.

He wanted a traditional, nuclear family, but I had seen so few examples of that that it held no real meaning for me. Our relationship ended for good in my junior year of college.

“I was 26 years old. I had a plan for my life, and while I didn’t have the specifics mapped out entirely, a baby wasn’t part of those plans.”

In 1999, after I’d moved back to Michigan from Raleigh, I was at dinner one night with my college best friend, Kelley, when I bumped into someone who’d once lived across the street from my grandmother — I’ll call him Larry.

Larry always had been good looking, but his boyish looks had been replaced with grown-man fine. He reeled me right on in, and we appeared to have a lot in common. We both loved early ’90s hip-hop and video games, and it was appealing to me that Larry had his MBA, which matched my ambition.

But as soon as we started dating, it was pretty clear that we were going to have a volatile relationship. We argued a lot. One time, we got into an argument over the brand of jelly I bought, which resulted in a screaming match in a grocery store parking lot. After what I’d seen growing up, I was adamant about what I didn’t want in a relationship — and that included explosive arguments about jelly in a parking lot. I also didn’t want mistrust and disrespect, and I wanted absolutely no physical violence.

One day, after another explosive argument, I called Larry and insisted that we see each other as soon as possible. We’d been together for nearly two years at this point, and I planned to break up with him.

He was at his parents’ house. On the way there, I bought a pregnancy test from the drugstore. My period was late, but I didn’t think anything of it, or entertain the idea that I might actually be pregnant. I just wanted to eliminate the possibility. My plan was to take the test in the bathroom and, as soon as I saw that negative result, break up with him and then be on my way. This remains one of the stupider plans I’ve ever come up with.

I’d been on birth control since I was 15 years old, and, even though I was on the pill, I still used condoms. Well, except for a few times with Larry. But for the first time, I’d let my prescription lapse. Of course, the responsible thing to do would have been to use condoms while I wasn’t on the pill, but we didn’t do that either.

When I got to his parents’ house, I explained to him that I needed to use his bathroom to take the test. His parents weren’t home, so I wasn’t worried about us having privacy. I peed on the stick and left the test on the back of the toilet. When 10 minutes had passed, I went back into the bathroom to check the result of the test. During the walk to the bathroom, it started to occur to me that this outcome could go differently than I’d imagined.

Anxiety set in. That walk felt like the longest walk of my life. My heart was pounding, and I actually felt light-headed. A bunch of questions flooded my brain at once. How was I going to raise a child? What kind of mother would I be? If I was pregnant, did it mean that Larry and I had to get married? How would my life change?

I finally got to the bathroom and picked up the test. When I saw those two red lines indicating I was pregnant, I almost fainted. My feet went numb, but somehow I made it back to the living room, where Larry sat waiting to hear the result. To his credit, he didn’t freak out when I told him I was pregnant. He hadn’t planned on becoming a father at 28 years old, but he did eventually want children. This wasn’t a topic we’d ever discussed, likely because we never imagined ourselves facing this situation.

I barely had any time to process that I was pregnant when his parents came home. I wondered if they could feel the awkward tension between us when they came into the living room.

After exchanging pleasantries with them, we went for a car ride so we could talk privately. Larry told me that he would support me whether or not I decided to keep the baby. This admission surprised me. He’d been raised to believe abortion was wrong. Of course, he wanted to know where our relationship stood, but considering the moment we were in, I had to figure out if I wanted to be a mother first.

During that car ride, I started to confront some realities. I didn’t want to be a mother. I had never been one of those women who longed for children. In college, I used to tell Kelley all the time, “You’ll know I really love my husband if I decide to have his baby.” Preposterous, I know. But that’s how dead set I was against kids.

I was 26 years old. I had a plan for my life, and while I didn’t have the specifics mapped out entirely, a baby wasn’t part of those plans. I told Larry I wanted to terminate the pregnancy. This wasn’t a decision I agonized over. I was certain the moment I said it.

The abortion clinic was in Southfield, which is just outside of Detroit. At the clinic, they performed a vacuum aspiration, also commonly known as a suction abortion, and the entire process took about an hour from the time I walked into the examination room. I had some spotting and mild cramping after the procedure, but I was otherwise fine in a few days.

The only person who knew at the time other than Larry was Kelley, and I remember feeling awful when I told her because I knew she desperately wanted to be a mother. I feared she would think I was selfish, but she was extremely supportive. In fact, after I got the abortion, I stayed tucked away at Kelley’s apartment for several days. Larry stayed with me, and they both took care of me as I recovered.

Strangely, the abortion actually brought Larry and me closer — but that only lasted for a couple months. He and I got into another one of our infamous, heated arguments, this time at my apartment not long after the abortion. I later learned that he was cheating on me, further confirming that having an abortion was the best decision for both of us.

After the procedure, I kept waiting to feel something, anything. But the only thing I felt was shame for even putting myself in that situation. However, I didn’t feel remorse or regret. Once I made the decision, I never looked back.

I made the right choice for me. Women deserve the right to decide if and when they want to have children.

In the six years I spent at the Free Press, I covered a bunch of major events — six college football national championships, three Final Fours, the NBA Finals, and the 2004 Olympics in Greece. I spent three weeks in Greece, and though it was challenging covering my first Olympics, it also gave me a rush covering the games in the country where the Olympics began. It was my first international reporting experience and it intensified my desire to see the world.

I took a day trip to the Greek isles, where I rode my first donkey and dove off a cliff. I tried ouzo for the first time — a Greek liqueur that tastes like sweetly flavored gasoline — and stayed out clubbing in Athens until the sun came up. These were priceless adventures that I’d always wanted to experience.

Having an abortion allowed me to continue building my career on my terms, like I’d always done. And not once have I wished I made a different decision.

'Uphill: A Memoir,' by Jemele Hill
Bookshop
More like this
11 Health & Wellness Gifts Any Fitness Devotee Will Appreciate
By Rachel Lapidos
This Company Will Send STI Tests Right To Your Door
By Lexi Inks
Allie Rowbottom Will Have Her Feminism With A Side of Botox
By Samantha Leach
These Are The Best Supplements For Runners
By Carolyn Steber
Get Even More From Bustle — Sign Up For The Newsletter