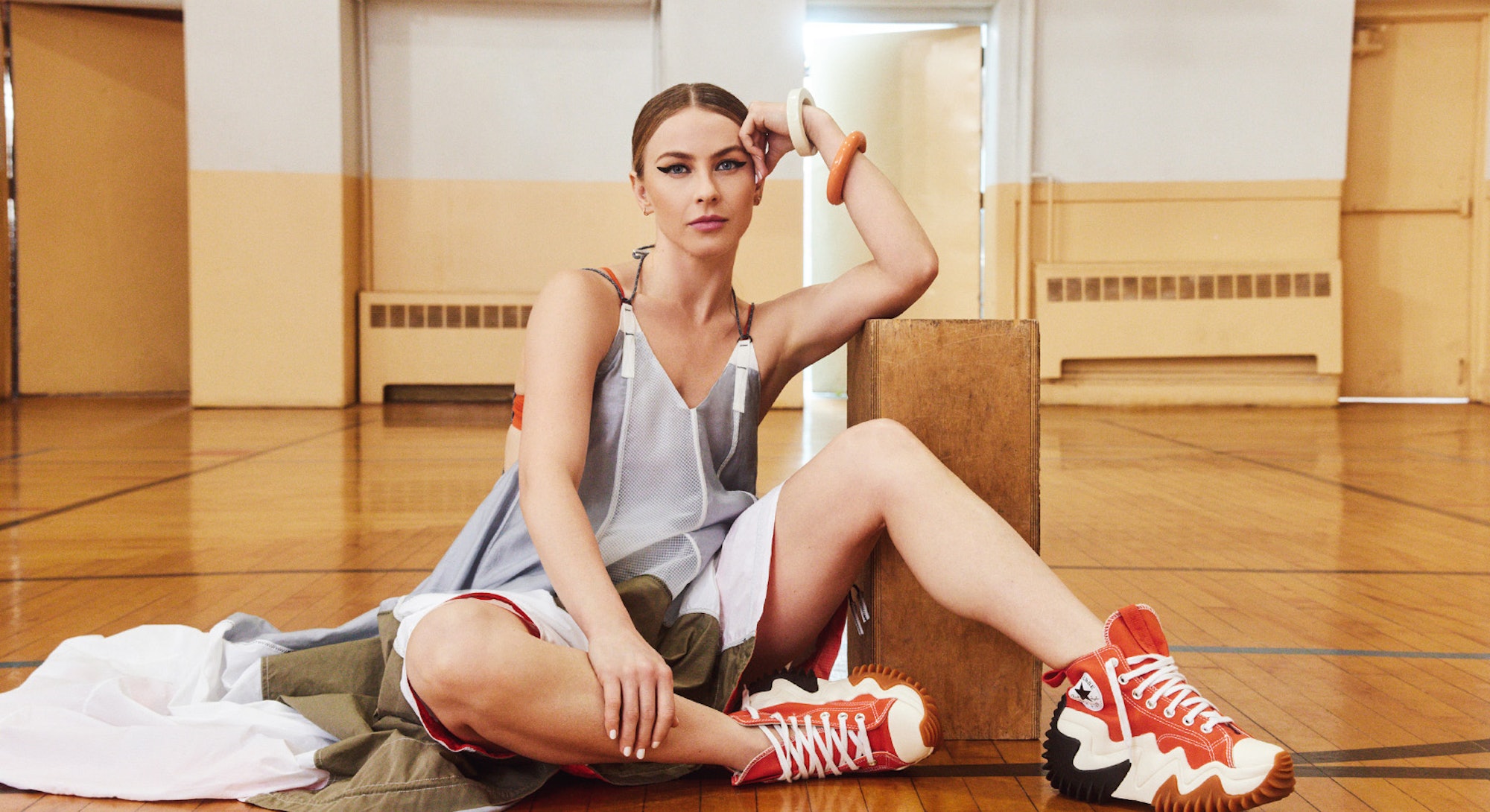 Warm is the word of the day when I meet Julianne Hough on a summer morning in late June. The weather? Warm. The hello and hug she immediately greets me with? Warmer. The greeting she gets inside the West Village coffee shop she suggests as a meeting place? You get the idea.

Hough has only been living in New York for the last few months, having relocated from Los Angeles to make her Broadway debut, but she seems right at home in her downtown neighborhood. She’s an authority on the food menu here at Rosecrans, which doubles as a florist and is also where Hough gets her houseplants, and she points out another café down the street she frequents. When we realize Rosecrans’ outdoor tables are right in the sun — and it feels a little, well, warm for that — she leads us a block over to shadier cover outside a different restaurant. And as we’re chatting over iced coffees, in a moment you couldn’t have scripted if you tried, one of her neighbors calls out a hello as he walks past with his dog.

It’s a sunny slice of what’s been a rewarding new chapter for the 33-year-old, who has taken on her most demanding role yet in POTUS: Or, Behind Every Great Dumbass are Seven Women Trying to Keep Him Alive (which runs through Aug. 14). With her years as a dancer and judge on Dancing with the Stars and film credits that include 2012’s Rock of Ages and 2011’s Footloose, many might have expected Hough to take center stage in a traditional, flashy-costumes-and-dance-breaks kind of musical — not an uproarious political farce from a young playwright (28-year-old Selina Fillinger) that mixes vomit gags and sharp commentary about women’s proximity to power.

“I didn’t want to just come here, do a bucket list thing, then check it off my list and be done,” says Hough, sitting across the table fresh-faced in a summery tank top and monochromatic beige pants. “This gave me a real opportunity to take all the work that I've done throughout my life and career and actually decide to do that for me, versus what other people want to see me do.”

Hough’s character, Dusty, is also not what you might expect. She’s a bright-eyed, excited young woman who initially seems out of place in the show’s White House setting, but as the show goes on, she proves to be intuitive and passionate, with a few, uh, hidden talents she’s happy to deploy. The character could easily be a stereotype, but Hough unlocks an impressive and wildly funny performance that’s unlike anything you’ve seen from her before. Whatever assumptions you start with, both the actor and the character she plays will challenge them.

“What I love about [Dusty] is that instead of being like, ‘I wish you could see that there's more to me,’ she just gets to surprise you. And I feel the same way about me,” she says. “Instead of in my 20s when I was like, ‘I would love everybody to know I can do so much more and they're just classifying me as a dancer,’ now it's so exciting because I get to surprise them every night.”

That includes even her co-stars. “What impresses me about Julianne is her comic timing,” says Vanessa Williams, who plays the first lady. (The small but stacked all-female cast also includes Rachel Dratch and Lea DeLaria.) “I knew she was an incredible dancer, extremely hard worker, singer, and a delight when she walks into any room, but for the success of comic timing, her natural rhythm, musical ear, and fearless nature truly shine through in each performance.”

Playing Dusty for the last few months means Hough has been immersed in the grueling life of Broadway performers. Hough does eight shows a week, including two on Wednesdays and Saturdays; Mondays are the only days the show is dark. “I really enjoy structure and knowing what I need to do,” she says. Each performance requires her to be on her toes, not just for nightly audiences, but for her fellow cast members as well. Hough and co-star Julie White have an informal competition to see if they can get the other to laugh mid-show. The night before we meet, Hough finally got the Broadway veteran to break. “Usually she gets me every time and I got her yesterday,” says Hough, grinning proudly. “I did something totally different yesterday [with a line reading] and she could not stop laughing. It was great.”

A crucial part of maintaining her physical and mental energy is finding time to work out. Her favorites include SoulCycle, Pilates classes, and other fitness studios at her Manhattan disposal like Barry’s Bootcamp, Body By Simone, and Tracy Anderson Method. (“My body likes variety,” she says.) There’s also her own online fitness company, Kinrgy, which launched in 2018 and melds dance and dynamic movement with meditations and breathwork. (I tried a few of the classes on the platform before meeting with Hough, working up a sweat on my yoga mat in my bedroom, and they were a welcome switch from my usual standbys of Peloton and running.) Some of the classes are taught by Hough herself, others by fellow athleisure-clad guides, all offering a reflective mind-and-body combo.

Mindfulness is a core part of Kinrgy, and it’s clearly important to Hough, who prefers to spend her day off exploring the city. “I want to feel like I’m alive and part of it,” she says, “and not just hermitting myself away in a dark room watching The Flight Attendant for a whole day.” Sometimes, she slips into New-Age-y motivational language — like when she describes how the upheaval of COVID-19 has given her a new outlook on life and work. (She also split from former professional hockey player Brooks Laich in 2020 after three years of marriage; their divorce was finalized last month.)

“I think it comes with age, too, but after the pandemic, [I’ve been thinking] about what’s important and what I can let go of, what can I clear this space for so that more can come in an abundant way?” she says. “Now I feel like I’m in a place where my time is valuable, my friendships are valuable, my family is valuable. I only want to do the things that I feel enhance my growth and evolution as a human. Anything that I do moving forward has to have intention and purpose behind it.”

Nobody tells you it’s a lot of effort to make new friends or nurture friendships.

So she’s investing in the people she keeps around her — she jokes her New York home is called “Hotel Hough” because of all the people who stop through — and cultivating the kinds of relationships she wants to have in her life. (Before showtime on Fridays, she has a revolving-door hang at a nearby jazz club, where her next-door neighbor — who’s lived in the building for 35 years — holds down the table.) “I have very widespread roots and I'm trying to create deeper roots. Who do I want to invest my time and my energy in that I know is going to show up for me, too? It's hard because you have to let things go, let people go, and be able to make peace with that.”

“By the way,” she adds, “nobody tells you it's a lot of effort to make new friends or nurture friendships. It takes time and energy. And I think that's what I've been really narrowing in on over the last probably six months. Who are the people that I want to build a life with? And it's not just a romantic partner — who are my people? When I look at my life in the future, I want to see these people in my life 20 years from now.”

In a few more weeks, POTUS will come to an end, and she’ll get to experience what New York City life is like on a regular weekday night. For now, she has a few more hours before that evening’s performance and doesn’t seem to be in a hurry to leave the table after we say our goodbyes. The busiest part of her day is still to come, but she’s enjoying a quiet corner of a quiet street, and — even without the hot June sun overhead — things are feeling pretty bright.