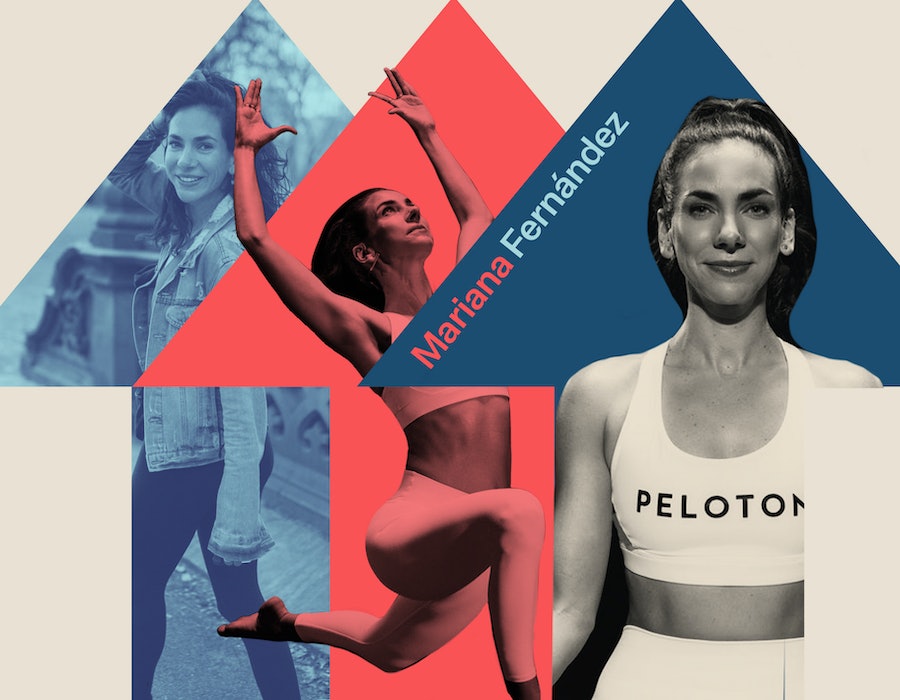 Peloton/Mariana Fernandez
By Rachel Lapidos
Oct. 14, 2021
The Level Up

In "The Level Up," changemakers in the fitness and wellness industries tell us how they're making an impact in their communities, from pushing for accessibility to promoting body acceptance and so much more. Here, Mariana Fernandez discusses her Latinx heritage and how she’s bringing more inclusivity to yoga.

In April, Mariana Fernandez joined Peloton as the first yoga instructor to teach classes in Spanish. This afforded her the opportunity to share the practice — something she credits for improving her overall well-being — with communities that don’t necessarily have wide access to yoga in the United States. “When I started doing yoga in 2004, I saw not only did I feel physical benefits from it, but I noticed what it did to my mind and my mental health,” she tells Bustle. “My overall body felt different afterwards. Like you experience a runner’s high, there was a yogi high — this elevated feeling not just in my body but my spirit.”

Fernandez is from Tampico, a small town on the Gulf Coast of Mexico, and grew up on the border of Tijuana and San Diego. When she first started practicing in her border town, she was among a big Latinx and Filipino community. “Then when I was in college in New York, I missed that component of having yoga be accessible to a broader community,” she says. But on Peloton, which has over 2 million subscribers and recently expanded its global offerings, Fernandez can now help make that more of a reality.

Through her classes on Peloton, Fernandez hopes to help her community feel seen by incorporating elements of her Mexican roots. “It’s been extraordinary because we’ve been able to teach all of these Latinx-themed classes and artist series, celebrating the people we grew up with who are part of our history,” she tells Bustle. “There’s no better thing to do than that — to bring out the richness of a culture and have it celebrated.”

Here, Fernandez shares more about what she hopes to bring to the fitness world through her yoga teachings.

How has your heritage helped shape your yoga practice and your teachings as an instructor?

My culture is very much part of who I am — in the music I pick and the way that I choose to sequence a class. I encourage people to shimmy their hips or their shoulders and bring that into their practice as a way to align themselves. I find that using music is another element that helps us move. So putting songs from my background that I grew up with — like from Maná, my favorite band of all time — I’ve found also resonates with a lot of our community members. It helps them feel like there’s part of their history and culture in the class.

Can you talk more about accessibility and diversity in yoga as you see it today in the U.S.?

When I was teaching in Mexico City from 2013 to 2015, I saw that fitness was being integrated as part of a lifestyle, and I wanted to make sure yoga was included. I helped open up some yoga studios and brought the practice into some of the gyms there so that members could have access and see that it didn’t have to be a foreign concept. So when I came back to New York in 2020 and saw our Latinx community here, I noticed that there weren’t a lot of people who saw themselves represented by the instructor, and that became very important to me [to change]. It should be available to all of us.

What are you excited to bring to Peloton as a Latinx instructor?

First and foremost, the fact that this platform has classes in Spanish is such a big deal. Hopefully, we can keep expanding our roster and involve more classes offered in different languages, and all different instructors can bring their history and the richness of their culture into the modality that we teach.

“Knowing there weren’t a lot of people who saw themselves represented by the instructor became very important to me.”

Just knowing that people could see themselves in the instructor, take a class in their language, or hear their music as part of the class can help them become more willing to tap into class or say, “I want to try that” [is exciting]. This all helps show that we can all sit at the table and that yoga is for everyone.

What’s something you want everyone to realize about yoga?

That it’s not just about the ability to move and connect with your body, but also to meet yourself with a little grace. I know that whether we’re on a bike or running outside, we tend to be really hard on ourselves. With something like yoga, when you’re trying to reach a posture or to meditate, there are so many things you can say to yourself. As a teacher, I always say I’m here to cheer you on and give you permission to meet yourself where you are in that moment. And it might be a challenging class or maybe it feels great — neither is better than the other. But it allows you to connect physically, mentally, emotionally, and really [to] where your heart is that day.