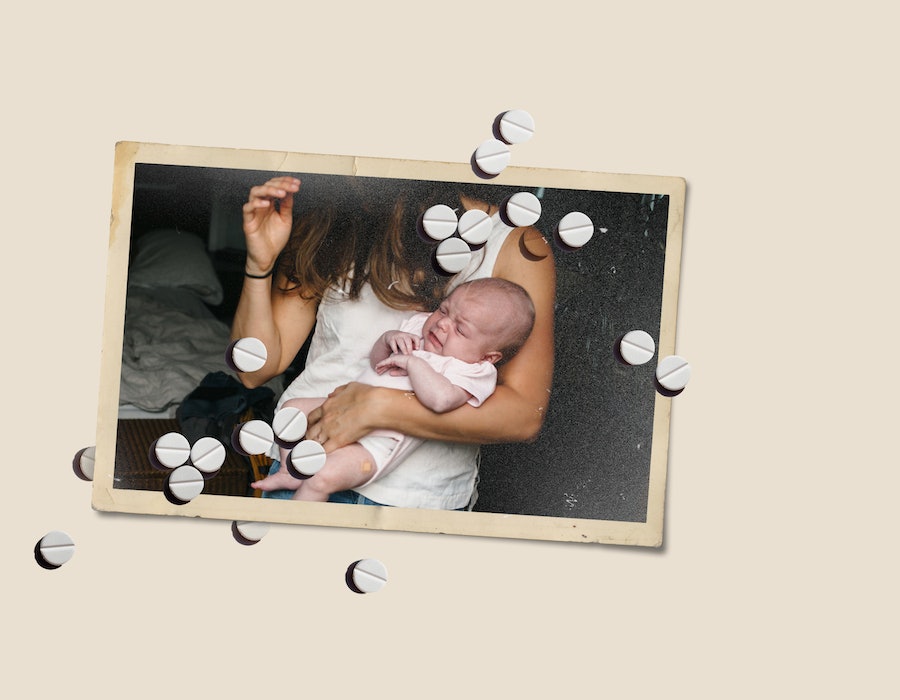 Me and My Meds is a new Bustle series exploring the way millennials relate to their mental health medications — the good, the bad, the ambivalent. Here, a new mom who lives in Dublin, Ireland, talks about postpartum anxiety and her own internalized stigma toward turning to meds for help.

I had a baby in March 2021, and the first month or two, I was bouncing around. I was very active; I was very happy. I was doing everything. I went to a protest – I was on the news at six weeks postpartum. My friends were like, “I guess you're one of those moms that the baby just falls out of and then you crack on with it.”

But by three months postpartum, I had changed. I was crying loads and my level of functioning decreased. I looked at my sisters who both have two babies, and I thought, “How can they be managing so fine with two babies, and I have one baby, and I'm not eating?” I thought I’d made a terrible mistake, that I was terrible at being a mother. I also started to get intrusive thoughts like, “What if I hurt my baby?” Just incredibly distressing stuff.

So I hit up my GP and a public health nurse and admitted, “I'm scared. I don't know what's going on. I've never been like this before. Help.” They referred me to a psychiatrist who diagnosed postpartum anxiety immediately.

The psychiatrist asked, “How would you feel about taking medication?” And my first response was an immediate no. I asked, “Can I not do yoga and meditate and talk to a counselor?” She said, “Yeah, absolutely. Those are all other valuable things to do.” So off I went to meditate my way out of a mental health crisis with a three-month-old baby who wasn't sleeping.

In some ways, it was a relief to be told, “Here's a diagnosis. You have this common postpartum condition.” And for a while that gave me a little bit of stability. I thought “Okay, it's named, and I understand it, and I can get to work realizing that intrusive thoughts are just thoughts and they don't mean anything.” But I just got worse.

Over the next three months, I steadily declined to the point of near panic attacks. I would be gasping for breath trying to talk to my husband. I was vibrating with anxiety. And my day-to-day functioning was very poor. I wouldn’t eat lunch, I wouldn’t shower. Emptying the dishwasher would be a struggle.

Even still, I wouldn’t go on medication.

I would never have suspected I held any personal stigma against medication for mental health issues. I have two family members who work in mental health. I read reports of people with anxiety and depression all the time in my job as a lawyer. I guess I just thought, “Some people have mental health trouble. I feel sorry for them. #MentalHealthAwareness.”

But then it happened to me. I felt weak. I felt like a failure. And I thought that if I took medication, then I'd be really ill.

But I was already mental ill. I was mentally ill regardless of how I responded to it or how I treated it.

I finally took the medication at the point where I felt I had no choice—three months after my psychiatrist first recommended it. I couldn't sleep. My mind was racing. I had this fear I might be losing my mind, like I might be becoming insane. To go from feeling like a functioning, competent, high-achieving person to feeling like you're actually losing your mind—it's just the most frightening thing that's ever happened to me.

As soon as I took the pills—it was sertraline that I was on—it's like a veil was lifted. I even worried I was feeling too happy. Like, “Am I overdosing? Am I taking too high a dose?” I rang my sister who said, “Have you met normal Shauna? Normal Shauna is doing a million things!”

I had these getting-back-to-myself moments. I hosted a Halloween party for 20 people three weeks after the meds kicked in. I made ice cubes by freezing water inside plastic gloves so there'd be frozen hands in the punch bowl. It was so elaborate. I was back on form. And just a few weeks prior, I couldn't do anything and everything was a disaster. It was like night and day.

After the Halloween party, one of the other mothers in my moms’ group saw posts about it, and texted, “What the actual fuck? How do you have fancy dress and makeup on? I haven't showered in three days.” She was also really struggling, and it was making her feel worse to see other moms being like, “Look at me nailing being a mom!” I responded, “Oh, I'm on antidepressants! I have medical help!” And now she is on antidepressants.

The thing that helped me the most coming to terms with it all was when I put out into the world that I was struggling with mental health, people who I thought were so together replying, “Oh, actually, after this big incident in my life or this stress period, I was on medication for a while.” So now I try to do the same.

More like this
You Probably Walk Asymmetrically. Here's How To Fix It.
By Carolyn Steber
9 Balance Training Exercises That'll Improve Your Mind-Body Connection
By Carolyn Steber
6 Unexpected Causes Of Post-Workout Fatigue
By Carolyn Steber
I Visited Remedy Place, The Social Club Transforming The Wellness Industry
By Rachel Lapidos
Get Even More From Bustle — Sign Up For The Newsletter