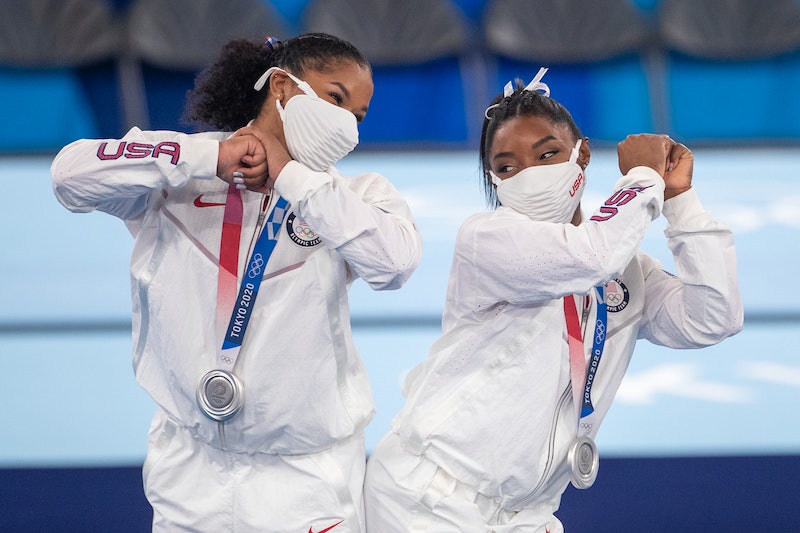 Like many of us, I've always been entranced by the performances of female Olympic gymnasts — so much so that, after the 1992 summer Olympics, I made an executive decision: I was ready to take up competitive gymnastics and, obviously, become an instant superstar. My parents were less thrilled about my new life plan; and although I'm sure it was because of the expense of lessons, they told me I couldn't start training for my spot on Team U.S.A. for health reasons — gymnastics would stunt my growth, they said. As someone who, at age 8, was frequently mistaken for a kindergartener, I didn't want to take the risk. But while I haven't spent much time since mourning my missed chance to rock an American flag-print warm-up suit, I have always wondered: does gymnastics actually stunt your growth? Or are gymnasts so short because small people just tend to be better suited to gymnastics?

It turns out that the scientific community itself isn't entirely sure — but the idea that gymnasts would have grown to be a foot taller, if only they hadn't spent all the time on the parallel bars, is absolutely a myth.

Why Female Gymnasts Are So Tiny

We can all agree that gymnasts appear to be shorter than the average woman their age. Jordan Chiles, at 5’5”, is the tallest female gymnast on Team U.S.A. at the 2021 Summer Olympics. That height leaves her practically towering over teammates like Simone Biles, whose official Olympic bio lists her at 4’8” — which makes her the shortest U.S. athlete. When you bring the height of top athletes in other fields into the picture, the stature of competitive female gymnasts becomes thoroughly shocking: Kevin Durant, leading Team U.S.A.’s basketball team, is a whopping 6’10”, per his Olympic profile.

When you examine CDC statistics of average female heights, you can see that the average fully-grown woman is around 5'4" — giving her a solid eight inches on 24-year-old Biles. But while the urban myths state that training keeps gymnasts from developing, there's strong evidence that women with smaller frames end up pursuing gymnastics because it is one of the few sports where being tiny is a boon.

Dr. Kevin Thomson, a physiologist who wrote about the physical qualities of gymnasts for the BBC, noted that "being small helps with rotational skills (for example, somersaults). For the same reason, gymnasts also tend to have short arms and legs." So just as basketball seems to draw taller people to its ranks, people who are naturally of a below-average height seem to gravitate to gymnastics, and may be more likely to excel at it than people closer to national height averages.

Other research has also suggested that the extremely tiny seek out gymnastics careers; one study from the 1980s suggested that most gymnasts were already shorter than their peers by age four. Dr. Robert M. Malina, professor emeritus in the department of kinesiology at the University of Texas at Austin, suggested to Salon in 2012 that most gymnasts are short because they have short parents, rather than because over-training stunted their growth.

However, the fact that gymnasts are generally small can't all be credited to self-selection. A 2000 study published in the Journal of Pediatrics found that, while the sport does draw women who are short and have delayed bone age (delayed bone age means that your skeletal maturation is lagging behind your actual age), gymnastics training can have some impact on growth. The study of 83 active female gymnasts, 42 retired gymnasts, and 154 healthy non-gymnasts, found that active gymnasts had some deficits in leg length and sitting height — but it wasn't typically permanent. Once they retired in their late teens or early twenties, most gymnasts "caught up" on growth. The study concluded that "[a]dult gymnasts who had been retired for eight years had no deficit in sitting height [or] leg length,” adding that “A history of gymnastic training does not appear to result in reduced stature...in adulthood."

Does Being A Gymnast Cause Any Health Problems?

There are upsides to being teeny in the world of gymnastics. The shorter you are as an elite female gymnast, the less likely you may be to get injured, according to some data. A systematic review of 22 studies published in British Journal of Sports Medicine in 2019 found that height and body mass were significant factors linked to gymnastic injuries, and the higher the level of competition, the bigger the risk. Being short lowers the likelihood of gymnasts hurting themselves. Another big potential injury risk, the study revealed, was “life stress,” or what Simone Biles called “the twisties” when she pulled out of two 2021 Olympic gymnastic events for the sake of her mental health.

But, in case you were wondering — yes, elite gymnastics training does seem to delay the onset of menstruation. One 1996 study found that only 20% of 13-year-old gymnasts, compared with 95% of average 13-year-olds, had gotten their first period, and that gymnasts were at risk of exercise-induced amenorrhea — a state where the body stops menstruating due to low body weight and hormones released during exercise. Luckily, the Journal of Pediatrics study found that gymnasts didn't seem to experience any kind of menstrual dysfunction as adults due to their early-life training.

Similarly, a 2002 study of 262 competitive gymnasts, aged 13 to 23, conducted by researchers at the University of Patras Medical School in Patras, Greece, found that gymnasts exhibited delayed bone age — male gymnasts were seen to be one year behind their actual age, while female gymnasts were shown to be two years behind — which study leader Kostas Markou believed was caused by training. "The earlier the age of onset of exercise," wrote Markou, "the worse the effect on bone acquisition." But the study also reported that the situation wasn't necessarily permanent; they also found that many gymnasts "caught up" their delayed height and bone maturation after they retired.

Further, a 2001 study published in the Clinical Journal of Sports Medicine found that "a cause-effect relation between gymnastics training and inadequate growth of females has not been demonstrated," though it also noted that "[t]here is conflicting evidence" as to whether gymnasts really hit their full potential regarding height during "the 'catch-up' [phase]."

The study also speculated that inadequate nutrition during training years, rather than the physical exertion of gymnastics training itself, might be related to the small stature of gymnasts; NBC has reported that gymnasts typically "try to get between 60% and 70% of their calories from proteins (like meats and cheeses), the rest from carbs (like whole-grain pasta, fruits, vegetables) and fats (like oils from peanuts)" — a diet that has not been formally linked with stunted growth, though historically, eating disorders have been an issue within the women's gymnastics community.

So while the training regimen of elite gymnasts seems to have some impact on their height, it's likely less severe — and far less permanent — than the urban myths that kept your parents from ponying up for gym fees. Which is good news for gymnasts worldwide — but probably bad news if you gave up on your gymnastics career just because you were afraid of never growing tall enough to reach the top aisle at the grocery store.

This article was originally published on Aug. 9, 2016