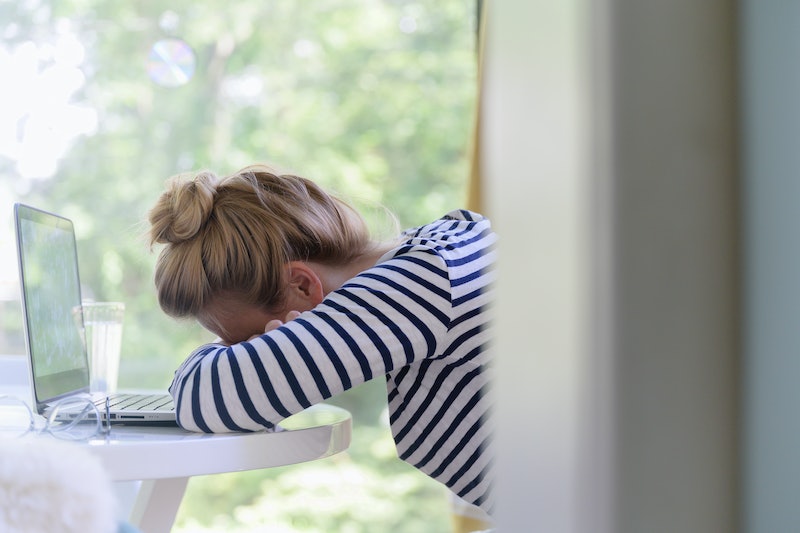 When you wake up after a night of drinking, you might momentarily feel like a spring chicken. But as the day goes on, and your hangover comes into view, it can really throw off the course of your day. While some hangovers resolve early in the morning, other hangovers get worse throughout the day. If you're used to a hangover that goes away after an Advil and a feast of greasy delights, the latter can be particularly problematic if it's a work day and melting into the couch with a weighted anxiety blanket is not an option.

Though hangovers are not always consistent — there are so many variables, like the kind of alcohol you consume, what you ate, how active you were, and what was going on in your body at the time — your age and just how much you drank may have the biggest impact on the type of hangover you experience. And some things, like poor sleep or a stomachache, can't be reversed with hash browns and electrolytes. Often times a snowballing hangover is on a one-way track — the damage is done, and the only way to end it is to allow your body time to repair itself.

One of the most important factors that plays into the severity and length of a hangover, according to One Medical provider, Natasha Bhuyan, M.D., is sleep. Even if you feel like you slept heavily, or for a long period of time, a drunk sleep is not a restful sleep. "Alcohol disrupts sleep, and as a result, you wake up with a deficit that will only feel worse as the day progresses," she says. When you first wake up, you're not using much energy, but by the time you start your day, your body is already running on fumes. A sleep deficit presents itself slowly and painfully, the more energy you exert and the more time you spend awake.

Dehydration is another culprit in never-ending hangovers, and if you don't keep chugging water throughout the day, the effects will only get worse. "The hangover sensation is exacerbated by both retrospective dehydration, and current hydration levels, so it's important to continuously be replenishing those levels," she says. Water infused with electrolytes or coconut water can be easier for the body to process in its taxed state and will give you a small boost of energy, too.

If you wake up with the kind of hangover that's left you sick to your stomach, and are feeling averse to eating anything at all, likely you're suffering from an irritation to your stomach lining, which is a very common effect of alcohol, Bhuyan says. "When we don’t have healthy fats or proteins in our system, it can make us feel even worse," she adds. Bhuyan suggests eating something that has liver supporting properties like eggs, oats, or dairy, to speed up your recovery and give you energy.

Another reason why your hangover might be sticking around is because you simply drank too much, too fast. According to Dr. Niket Sonpal, M.D., an internist and gastroenterologist, the liver can only metabolize one drink per hour, on average. So if you didn't give your liver time to adequately process each drink, you essentially overwhelm its function. "When a person exceeds that, and drinks more rapidly, acetaldehyde (a byproduct that the body produces as it processes alcohol) cannot be broken down and end up being released into the bloodstream resulting in a dreaded hangover," he says.

What's more, the liver's ability to process the toxins in alcohol diminishes with age, so the combination of being older than you were when you could rally through a hangover, and drinking too much or too fast, can leave you with an irreversibly lengthy hangover.

Both experts agree that pacing your drink orders, hydrating in between drinks, and getting into bed as early as possible will reduce your chances of getting a hangover that escalates. And that no matter how tempting it might be, avoid hair of the dog — while it might temporarily alleviate some of your aches and pains, it will only leave you in worse shape for the rest of the day.