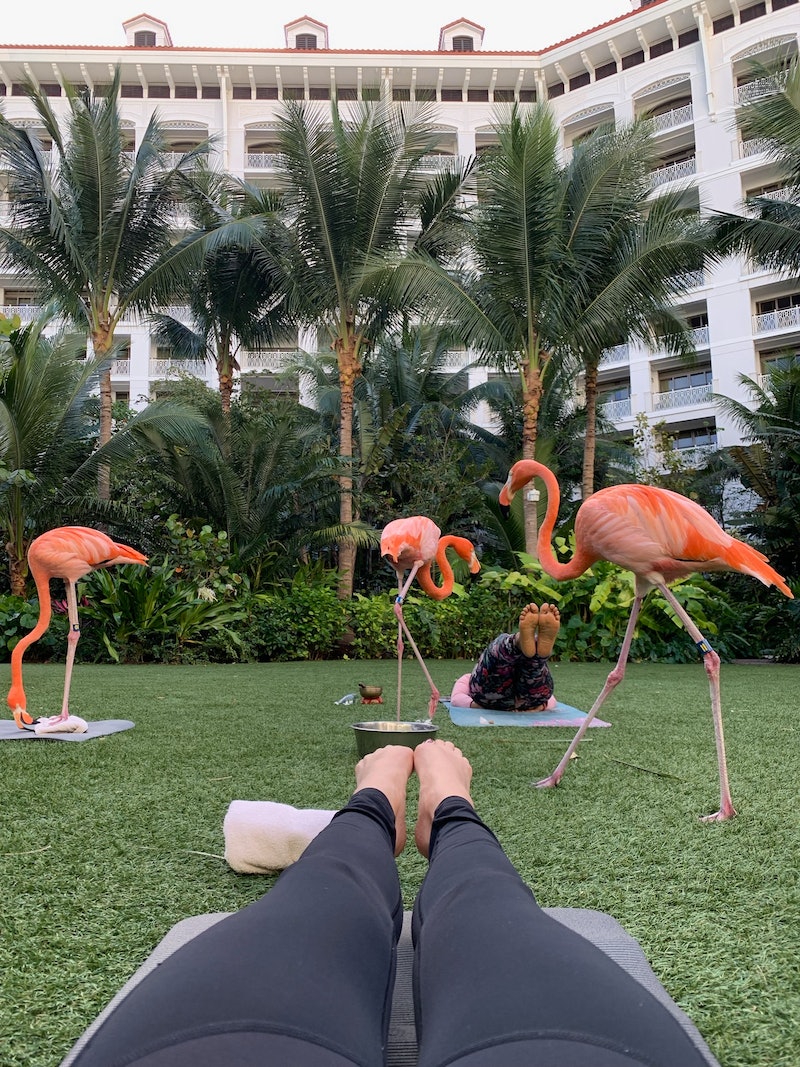 Doing yoga with animals isn’t new (see: goat, alpaca, cat, and dog yoga as just a few examples). If you’re an animal lover, any activity is made infinitely better when it’s paired with a furry friend — especially when their cuteness serves as a distraction as you balance in a yoga pose. But the Baha Mar resort in the Bahamas makes a pretty good case that flamingos — yes, flamingos — are the best natural yogis. (They do have a pose named for them, after all). Guests at the luxury property — which is made up of the SLS Baha Mar, Rosewood Baha Mar, and Grand Hyatt Baha Mar — can channel their inner zen alongside the resort’s three-year-old pink flamingo “ambassadors,” Luca, Baha, Indy, and Lynden, lovingly named after the Bahamian prime minister who guided the nation to independence.

Sure, you’re probably thinking, “What on earth is relaxing about doing yoga next to a bunch of honking four-foot-tall birds?” I get it. But during my recent bachelorette party at SLS Baha Mar, I personally couldn’t think of a better way to celebrate the end of my singledom than working out with a flock of gorgeous, single males — at least, probable males. (I’m working on assumptions here since the only way to determine the sex of flamingos is by using DNA extracted from blood samples). So my friends and I scheduled a $600 private session at Sense, A Rosewood Spa, with yoga instructor LaKrista Strachan in the hotel’s lush tropical garden. Resort guests can also attend a weekly flamingo yoga class at Baha Mar’s ESPA Spa, which takes place every Saturday morning for $60.

I’m still not quite sure if his gaze was critical, taunting, or perhaps embarrassed at how hard I was trying to keep my balance.

Our mats had barely hit the manicured grass before a small parade of three birds — shepherded by the resort’s chief flamingo officer Shaquille Wilson — arrived. Baha, Indy, and Lynden have done this before, apparently, because they needed zero invitation to hang: They made themselves right at home on the extra mats as they playfully stomped their feet on the foam and squished it with their massive beaks. According to Wilson, flamingos are incredibly curious and love to investigate unusual objects and textures.

That’s something our group discovered firsthand as the session got underway. Almost as soon as Strachan led us into child’s pose, Baha, Indy, and Lynden slowly approached us to inspect our towels, mats, phones, and even our hair. Coffee cups were of particular interest. Unlike goat yoga, where the teacher often places a baby goat on your back or leads an animal to you in order to prompt interaction, the flamingos actually seemed to enjoy being around us — or, at the very least, found us mutually entertaining.

We moved our way through slow, extended Hatha yoga basics, such as downward-facing dog and triangle pose, enjoying the island breeze and occasionally startling from an extra loud bird honk. When it came time to move into tree pose — a flamingo’s specialty, of course — Indy stood and watched me closely. I’m still not quite sure if his gaze was critical, taunting, or perhaps embarrassed at how hard I was trying to keep my balance. We can’t all be naturals, I guess.

Admittedly, it can be difficult to stay present and aware of your breathing when three lanky flamingos are flapping around you. At one point, when we were fully stretched out on our backs in savasana, the birds took the opportunity to chase each other in circles and jump over our prone bodies, almost like small, feathered children hopped up on too much sugar. Yes, this takes some getting used to, particularly if you’re the type to instinctively duck whenever a bird almost flies into your head (shoutout to New York City pigeons). But for anyone who finds the natural world and animals calming, as science claims they are, the experience is nothing short of rejuvenating —which may not be that surprising considering we were surrounded by elegant flamingos, sunshine, and swaying palm trees. While I can’t say this was the most challenging yoga class I’ve ever taken, I know I’ll be dreaming about it — and still laughing about it with my friends — the next time we cram into a sweaty workout class in a crowded room.