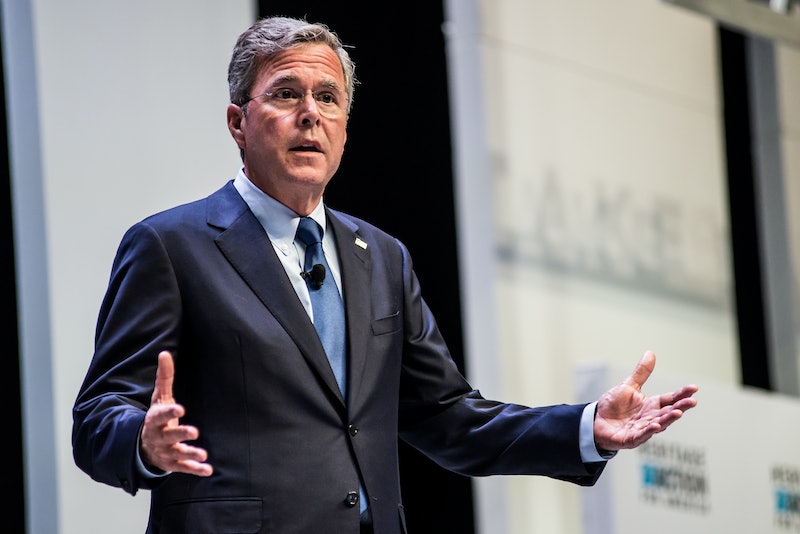 Republican 2016 presidential hopeful Jeb Bush isn't sitting on the sidelines when it comes to Hurricane Joaquin. In an interview with ABC News Wednesday, Jeb Bush outlined his plans for dealing with Hurricane Joaquin, and his ideas were concrete and well thought-out. Bush's comments to ABC News show that he's not just focusing on his campaign — he's also thinking about a variety of issues that could impact Americans. (Update: Hurricane Joaquin strengthened to a Category 4 hurricane on Thursday afternoon.)

Bush explained that the areas of the U.S. East Coast which may be in Joaquin's path, should the storm make landfall in the United States, should have evacuation plans in place, in case the worst happens and the storm hits. The 2016 presidential candidate said that while citizens are responsible for evacuating their areas if necessary, government officials on the East Coast should also be prepared for the storm, in case Hurricane Joaquin hits the United States. Hurricane Joaquin, currently a Category 3 storm, is heading toward the Bahamas and may make landfall in the United States within a few days.

The storm could reach Category 4 levels by Thursday evening, experts predict, and if it does hit the United States, it could make landfall anywhere from South Carolina all the way up the coast to New England.

"It's easy for people to be prepared, and public leaders, mayors, and governors have a duty to let them know they'll be there to help them the day the storm passes," Bush told ABC News reporters in New Hampshire on Wednesday, when asked how he would respond to the issue if he were president today. "But in the interim, it's up to citizens to be prepared and evacuate if they're in low lying areas. And, you know, be safe, basically."

In addition to proving that Bush is capable of responding to a variety of potential crises, ABC News' question also gave Bush the chance to rise above his fellow GOP presidential hopeful Ben Carson. When ABC News reporters asked Carson the same question, about his plans for dealing with Hurricane Joaquin if he were president today, Carson apparently let out a "giggle" and said, "I don't know."

Carson's response — and the fact that he laughed about a potentially disastrous situation that could affect tens of thousands of people — doesn't send a great message for someone who wants to be the next United States president. If Carson, Bush, or any of the other 2016 presidential hopefuls is elected next year, they'll have to deal with issues like Hurricane Joaquin, and they'll need to be able to think quickly about the best ways to respond. Even if you don't agree with the majority of Bush's politics, he showed Carson up on Wednesday by outlining how he'd respond to the storm if he were in office today.