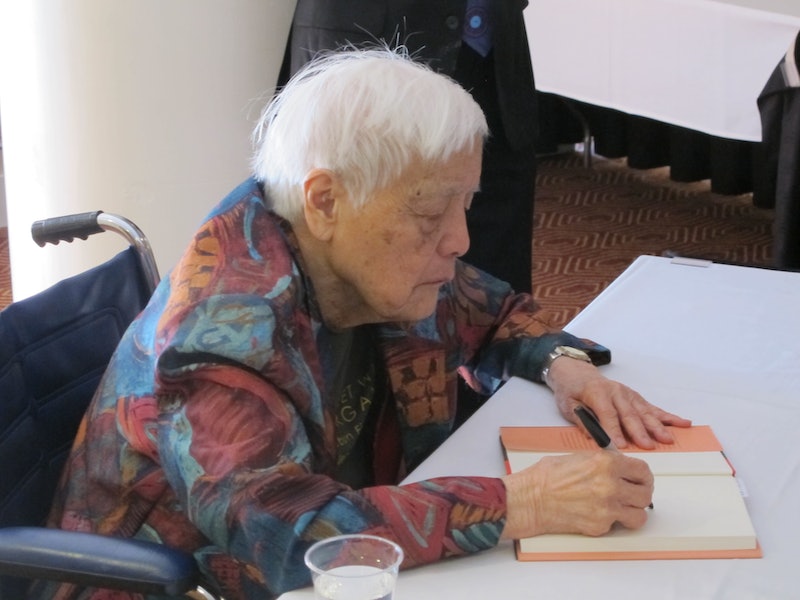 On Monday, legendary human rights activists Grace Lee Boggs died at her home. She was 100. "She left this life as she lived it: surrounded by books, politics, people and ideas," said her friends and carers Shay Howell and Alice Jennings in a statement. Boggs had been an activist for a number of causes throughout her life — civil rights, women's rights, and local rights in Detroit — and published her fifth and last book, The Next American Revolution: Sustainable Activism for the Twenty-First Century, at the age of 95.

Having studied philosophy at college, Boggs made it her mission to stand up for the rights of women and people of color, according to her obituary in The New York Times. Boggs had worked with a number of activists throughout her life, including her husband, James Boggs — himself an activist who campaigned alongside many of the civil rights greats — who died in 1993. She was also a proud feminist, penning Women and the Movement to Build a New America in 1977.

In 1992, when Boggs was in her 80s, she founded local youth organization Detroit Summer. She was also the star of the documentary American Revolutionary, described by PBS as such:

Grace Lee Boggs, 99, is a Chinese American philosopher, writer, and activist in Detroit with a thick FBI file and a surprising vision of what an American revolution can be. Rooted for 75 years in the labor, civil rights and Black Power movements, she challenges a new generation to throw off old assumptions, think creatively and redefine revolution for our times.

You can stream the documentary for free for the next month here.