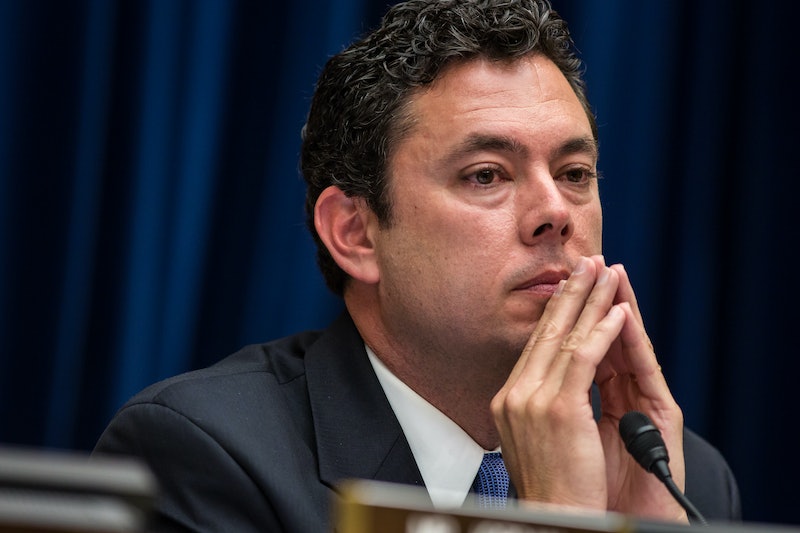 In a recent hearing, House Oversight and Government Reform Committee chairman Rep. Jason Chaffetz (R-Utah), tried to slam Planned Parenthood President Cecile Richards using an infographic that he claimed showed a huge drop in the number of breast exams and a sharp increase in the number of abortions between 2006 and 2013. The chart Chaffetz displayed, however, was actually from an anti-abortion group which had misleadingly manipulated the data. Unfortunately for Chaffetz, who announced this week that he would be running for the soon-to-be-vacated House Speaker seat, EMILY's List wasn't content to let the gaffe slip by. They used the slip-up to create a hilarious and especially pertinent graph of their own.

"In the same vein of Chaffetz's 'misleading' and 'ethically wrong' graph ... we've created a new graph — this one showing Chaffetz's House leadership trajectory," the group explained in an email to Bustle.

Chaffetz first announced his bid for the speakership on Sunday, in the wake of current House Speaker John Boehner's announcement that he would be stepping down from the position and his congressional seat at the end of October. And though he claimed in an interview with Fox News Sunday that he could "bridge that divide between ... more centrist members and some of the more far-right-wing members" of the Republican Party, his recent gaffe threw that decision into a definitively negative light.

The original graph to which Chaffetz had referred at the September 29 Planned Parenthood hearing was culled from the lobbyist and advocacy group Americans United for Life. Though the numbers on the infographic themselves were not necessarily wrong, the manner in which they were presented was especially confounding. For one thing, the graph was conspicuously missing a y-axis. So while the rate over time of both the numbers of abortions and cancer screenings was correct, the giant "X" the two trajectory arrows formed was blatantly misleading.

Using a faux infographic similar to the one Chaffetz displayed at last week's hearing, EMILY's List (which works to promote female, Democratic political candidates) seized the opportunity to poke fun at both Chaffetz's speakership candidacy and his embarrassing Planned Parenthood stumble, explaining that the number of false attacks on women's health were directly correlated with a drop in GOP credibility. And though it was meant in jest, the barb carries with it much more serious connotations.

According to several anonymous congressional sources who spoke to Politico last week, Chaffetz's run for the House Speaker position could throw a wrench into the GOP's inner workings, least of all because it would be highly unlikely for him to win the necessary 218 votes needed to ascend the role. More importantly, Chaffetz's current aggressive campaign against Majority Leader Kevin McCarthy might "drive a wedge" between the two men, causing even more strife amongst Republicans, who have already been split by Boehner's announced resignation.

Aside from the partisan issues, however, was the most obvious. If a congressional member like Chaffetz — who clearly wasn't against misleading the public and wasn't double checking the propaganda handed to him — could run for one of the highest positions in the U.S. government, any lingering hopes that the GOP might eventually come around on the issue of women's health were rendered moot.

With Chaffetz's speakership intentions made clear this week, Republicans in Washington looking to win over female voters had one simple job: to clarify that his run would not be supported. Unfortunately, on that front, it seems that they failed.