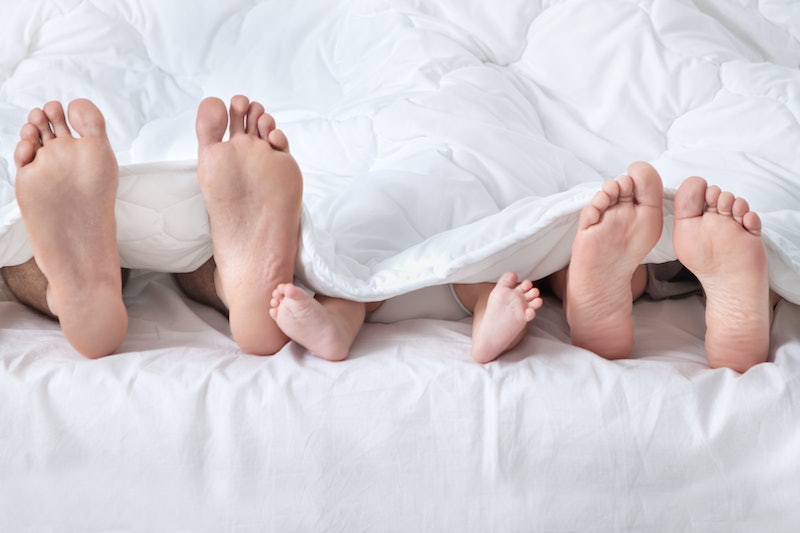 According to a new report from the Economic Policy Institute, the cost of having kids is continuing to rise, making the price of raising a family virtually unattainable for an increasing number of Americans. Wondering if you'd pass muster? The Department of Health and Human Services has established a threshold indicator: If you can set aside 10 percent of your family's budget for childcare, you're golden. But guess what? Only a few of the 618 areas surveyed by EPI even come close to being able to. Gulp.

Just consider this: Childcare for a family with a four-year-old and an eight-year-old ends up costing 11.8 percent to 21.6 percent of the family budget. And when reconstructed for a family with an infant and a four-year-old, those numbers rise to 19.3 percent to 28.7 percent. Shockingly, the EPI also found that childcare costs for families with two children exceeded rent in 500 out of the 618 areas surveyed. In Binghamton, New York, for example, childcare can cost nearly three times what a family pays for rent. Now, the cost of living does vary widely across the U.S. (For instance, childcare for a four-year-old ranges from $344 per month in South Carolina to $1,472 in Washington, D.C.) But these differences were built into the budgets the EPI came up with.

While these costs may fall just within reach for most middle-class families, they're flat-out impossible to afford for those making a lower income. A full-time minimum wage worker would not be able to manage the HHS's 10 percent threshold in any of the 618 locations studied, even after taking into consideration the fact that many states offer a minimum wage higher than the federal minimum of $7.25. For example, a parent in Hawaii, whose minimum wage is $7.75, would essentially have to work from January to September just to cover childcare.

Are you sitting down? Because it gets worse. In 24 states and the District of Columbia, the cost of childcare for a four-year-old exceeds even the cost of in-state full-time undergraduate tuition at a public institution. That's right — more than college. If you're looking for someone to care for an infant, that brings the number up to 33 states in which you'd be better off sending your baby to a state college than daycare. Even out-of-state tuition isn't that much more than childcare prices.

Of all the areas studied, Atlanta was found to have the lowest costs for childcare. But even there, the cost of caring for an infant and a four-year-old account for almost 20 percent of the family budget, which is nearly double the affordability threshold. And that's the best-case scenario. In places with more expensive childcare, like Boston, you'll be devoting nearly a third of your total income to it.

So why is childcare so expensive? It's as simple as supply and demand. CBS News spoke to Joya Misra, professor of sociology and public policy at the University of Massachusetts, who blamed high turnover for a job that's not only labor-intensive but also low-paying. "There's a reason why we don't have enough of a supply of childcare in this country, and that's because it's extremely poorly paid." CBS notes that childcare workers earn a median wage of $10.60 per hour, which is less than your average dog trainer. And come 2016, a job flipping burgers at MacDonalds will basically put you on the same pay scale.

While that may sound depressing, not all hope is lost. There are many state- and privately-funded programs dedicated to offering families childcare assistance. There are even government-run programs at the federal level, like the Child Care Access Means Parents in School program, which assists parents in college with childcare costs. Misra and other advocates are also pushing for childcare to be considered a public service and funded through tax dollars, no different than how we now fund schools. She added that publicly-funded childcare would actually help the economy by keeping women at work and reducing the wage gap between working mothers and women without children.

And I agree. According to a Princeton study on international childcare policies, only five percent of U.S. children under age three and 54 percent of children ages three to six are in publicly-funded childcare — a stark contrast with several Nordic countries. Take Denmark, for example, where 48 percent of kids under three and 82 percent of kids ages three to six are in publicly-funded healthcare. As a result, more of their mothers seem to be able to head back to work with ease. According to recent international statistics on working mothers, Sweden, Denmark, and Norway all top the list of countries with working moms, with 76, 74, and 73 percent, respectively. As for the U.S.? Only 61 percent of moms are working (the global average is 54.3 percent). It's hard not to compare these stats and think that they must be taking better care of mothers and children overseas. Isn't it time that we step it up?