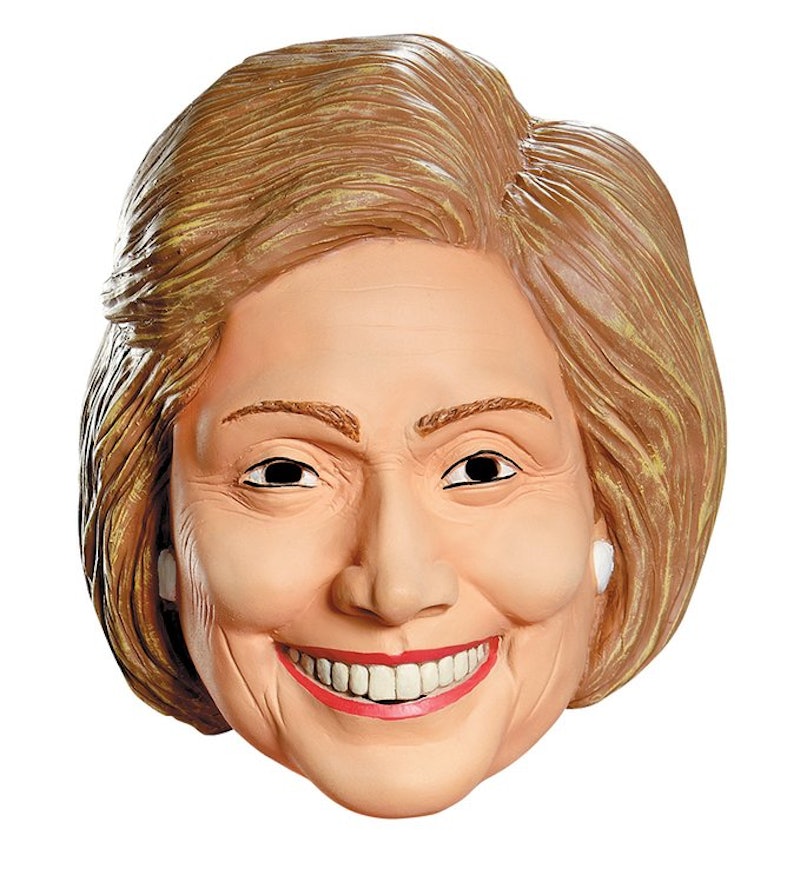 The Halloween season is upon us, and the big day itself is rapidly approaching. Maybe you've been procrastinating — happens to all of us sometimes — but you don't want to wait too much longer to pick out a costume. And if you can stand to have a slightly sweaty face, maybe you're thinking about going the mask route. It's a sensible choice, as masks can be cheap, effective, and easily worn or taken off without hassle. So with that in mind, here are 9 cheap Hillary Clinton masks for Halloween that could serve you well into next year's election season.

First things first, a necessary disclaimer: obviously, masks of politicians can often be a little horrifying, and that's a very desired effect on Halloween, right? However, it's also true that pointedly sexist jokes and barbs about Clinton's appearance have been a sad reality of her public life from basically the moment it began, so it can sometimes feel additionally loaded when you see an especially unflattering mask of her image.

But that said, it's not as though the Halloween mask industry is very flattering to anyone — there are some truly grotesque and unrepresentative examples out there, regardless of gender. And more to the point, as long as your costume isn't wildly offensive (looking at you, inevitable white person in blackface story), isn't it nice to just chill out and have fun? Here are some choices for you if you're going with a Hillary mask — some pretty impressive replicas, and some... less so. And remember, if you nab one of these, it might be relevant for next year's Halloween too!

This is a pretty decent replication of the Clinton visage, as far as Halloween masks go, although the shorter hairstyle is probably more synonymous with her days in the Senate. The teeth are a little in-your-face, as well, and as pictured at the very least, it's got a glossy look to it. But it's definitely worlds better than a few of these, as you'll soon see.

This one also does a pretty good job capturing the essence of Clinton's face, and you can hardly beat the price at just $5.

Obviously, some of these masks have to get at least a little spooky. If you've ever wanted to dress up as an undead Hillary Clinton on the prowl for a blood-and-guts dinner, here's your chance!

Certainly darker than her hair is now, at least based on the provided image, but you might not mind that — this mask does look markedly less glossy and more naturalistic, which is a definite plus if you want someone to mistake you for the former Secretary of State.

Yet another solid, attractive choice — one of the biggest pitfalls for Halloween masks is in the smile, as the difference between creepy and friendly can be pretty slight. That risk also always seems to increase the bigger you make the mouth, but this one still has a pleasant look to it, and it's certainly recognizable. It's also the last of the truly credible Clinton lookalike masks on offer here — strap in, because the next three are going to get a little wild.

6. What The Hell Hillary

Ahh... the less said on this one, the better. You can't knock its price, though — just a shade under $7, with free shipping, so hey!

I told you we were getting into some lean territory here. If there's any particular advantage to picking this mask, it's the versatility — if you get tired of the pseudo-Hillary look, you're just a quick coat of paint on the hair away from a Gary Busey mask!

Oh, my, no. Obviously, I'm not going to tell you how to spend your money, and maybe you look at this picture and think "Hey, what an awesome Hillary Clinton mask!" Maybe you think that. Somebody somewhere, presumably, does. But Halloween isn't always the time for playing it straight, anyways — maybe your life's ambition is to put together the worst, most garish Hillary Clinton costume possible. If that were true of you, then this mask would be a steal at any price!

If you're looking for a scary Hillary mask, this is surely the cream of the crop. Of course, as you up the horror factor, the recognizability diminishes — ideally, you'd want people to not have to ask what you're dressing up as, and it's likely that a whole lot of people won't be able to tell on their own if you go this route. It's an impressive design all the same, though!

More like this
26 Ghost Story Podcasts To Get You Ready For Halloween
By Jessica Booth, Mia Mercado, JR Thorpe and Emma Carey
15 Easy Pranks To Play This Halloween
By Emily Kelley and Lauren Grant
26 Easy Halloween Makeup Looks For 2022 That Require Zero Skill
By Olivia Rose Ferreiro
10 Stranger Things-Inspired Halloween Costumes For True Fans
By Emma Carey
Get Even More From Bustle — Sign Up For The Newsletter