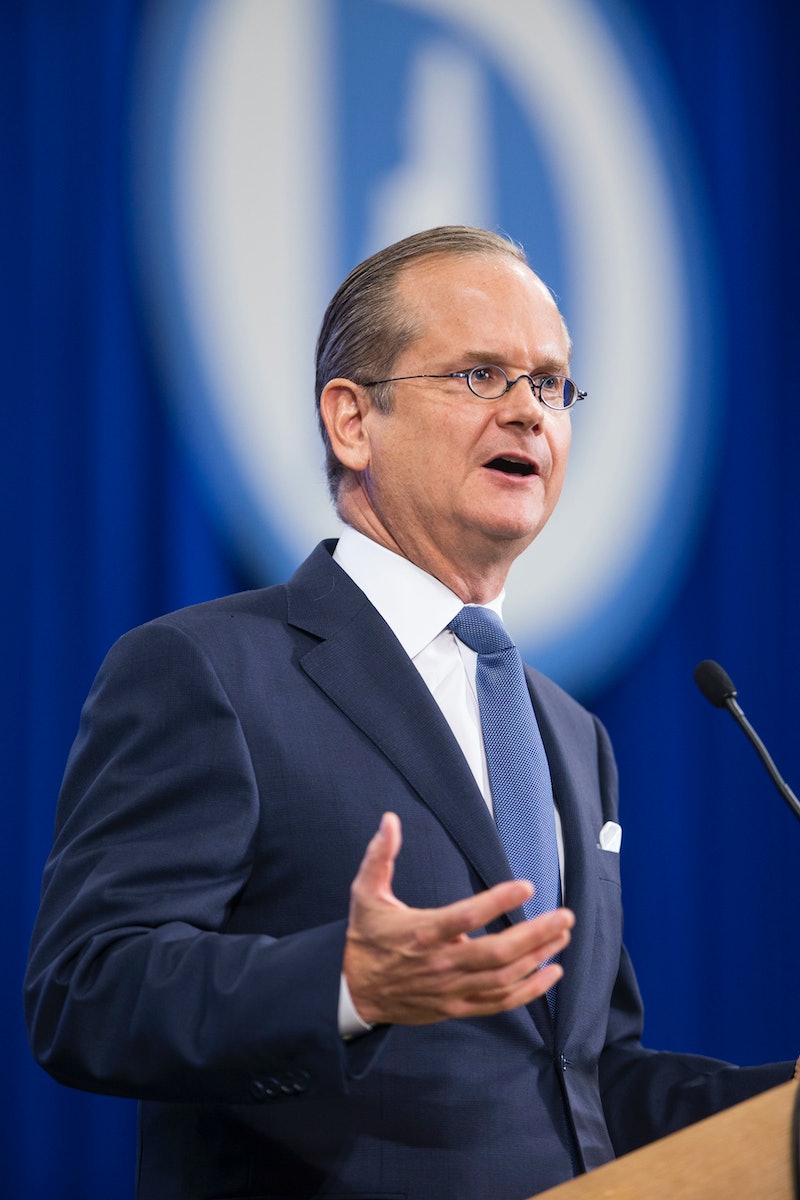 By this point, you're probably pretty well-acquainted with the super-sized Republican presidential field. There are still a whopping 15 GOP candidates in the running, after the departures of Rick Perry and Scott Walker, and it's led to a couple of wild, altogether overstuffed debates so far. Conversely, there are only six people running for the Democratic nomination, yet one of them could be frozen out of the upcoming CNN debate. So, why won't Lawrence Lessig be at the Democratic debate next week?

First things first, you might be unsure who exactly Lessig is, because between the Clinton behemoth and the grassroots fervor of the Sanders campaign, he hasn't gotten much coverage so far. In the simplest, broadest terms, Lessig is a non-politician who's entered the race with a singular goal in mind: to galvanize a movement to reform money in politics (apart from his day job — he's a Harvard Law professor and a well-respected writer and speaker on campaign finance issues).

His plan? Get elected president on this singular platform, thus proving a crystal-clear mandate that would force Congress to enact game-changing reforms on campaign finance. Then, he says, he would resign, handing the job off to his vice president. It's a pretty impressively innovative strategy, regardless of whether or not it could feasibly work. But it definitely can't work if people don't know who he is and what he's about, which is why the CNN Democratic debate rules are causing him so much angst.

To hear him tell it, he's getting frozen out partially because the Democrats don't want him there — he claims he hasn't been truly invited into the race by the party apparatus, despite jumping into his presidential campaign on Sept. 9. But even more consequently, as far as the debate goes, he's at the whim of his polling averages. According to CNN's rules for the Oct. 13 debate in Las Vegas, candidates must receive at least 1 percent of the vote in three different national polls taken between Aug. 1 and Oct. 10.

But for a fringe campaigner like Lessig, that means the pollsters are themselves acting as gatekeepers. Simply put, if polling firms decide not to include Lessig's name in their polls, then he can't possibly pass that barrier. It's an especially absurd set of circumstances when you consider that purely speculative decisions to poll on Joe Biden, who isn't even in the race, mean he could file paperwork tomorrow and join the debate if he wanted to. In speaking to TIME on Wednesday, Lessig sounded particularly chaffed to be kept off a stage that includes dead-end propositions like Lincoln Chafee and Jim Webb.

There’s a bunch of polls that are out there that come before the end of the week, so it’s conceivable we could cross the line [to make the 1% poll average needed to participate in the CNN debate]. There’s a lot of people raising the issue about whether CNN should be restrictive like this. If you look at the viability of this campaign relative to Lincoln Chafee or Jim Webb, I’ve qualified for public funding, they haven’t qualified for public funding, and there’s more energy and enthusiasm that’s driven support for my campaign than theirs.

As Lessig notes, there's still an outside chance he could sneak in if he nets at least 1 percent in some last-minute polls through Saturday, but that just lays bare the sad reality — his prospects are entirely dependent on not just his levels of support, but on the whims of the people making the polls. All in all, he summed it up pretty perfectly: "It’s a struggle for an outsider who is not a billionaire."