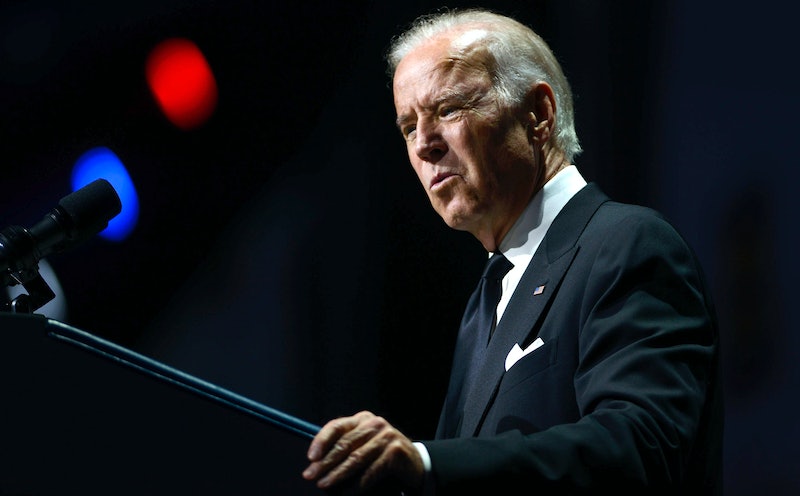 Vice President Joe Biden still hasn't decided whether he will run for president in the 2016 election, and that answer probably won't come anytime in the next few days, according to the Washington Post. The Post reported Wednesday that, depending on which anonymous aide a reporter talks to, Biden is "almost in or almost out" or "kind of in" if he does something first. Some Biden supporters and super PACs are pushing the vice president to run. The Democratic National Committee even invited Biden to the first presidential debate for Democratic candidates, according to CNN. Will Biden be at the first democratic debate? He turned down the invitation, but it's unclear whether he will sit in the audience.

The first Democratic debate will take place Tuesday, Oct. 13, in Las Vegas, and Lincoln Chafee, Hillary Clinton, Martin O'Malley, Bernie Sanders, and Jim Webb have all been invited, according to CNN. Biden was invited because he met the minimum polling threshold for entry into the debate, according to CNN. Sources close to Biden told CNN last week that he would not be participating because the criteria would have required him to announce his candidacy by the date of the debate, according to the debate criteria. The sources said that Biden doesn't feel any pressure to make a decision by that date, and that he will likely wait until the second half of October to announce his intentions.

So, Biden won't be on stage, but will he be in the audience? That is less clear. Neither Biden nor anyone close to him have said whether he will attend the debate just to watch, but he certainly could. A super PAC called "Draft Biden" will air an emotional ad titled "My Redemption" before the debate starts, according to the Hill. The ad ends with, "Joe, run," so it seems pretty clear that the super PAC is convinced that he will see the ad — either while sitting in the audience or while watching the debate on TV — or will at least be pressured by people on social media and in his inner circles to run.

There are certainly a lot of people who would like to see him on the stage, so his physical presence at the debate could be a serious signal to those supporters. So far, Biden is polling behind Vermont Sen. Bernie Sanders, but The Detroit News seems to think that most of Michigan would swing its support to Biden if he announced his candidacy. And a number of Hillary Clinton's supporters are saying that Biden might prove a good alternative depending on how Clinton's Oct. 22 hearing goes in front of the House Select Committee on Benghazi, according to CNN. Both the committee and the Justice Department have heavily scrutinized Clinton's use of her private email account while she was Secretary of State. Though no evidence of wrongdoing has been found, the scandal has hurt her image.

State Rep. Fred Durhal III, a Democrat from Detroit, endorsed a the "Draft Biden" movement this week, even though he told the Detroit News that he's not convinced Biden will run:

I’m not knocking Hillary, saying she can’t do it, but at this point I think Joe Biden is the better candidate. He’s hanging around there just in case something happens to the Clinton campaign. Joe Biden could just slide right in.

Biden certainly has supporters who would like to see him on the stage, but they might have to settle for his presence in the audience or maybe even just from his couch.