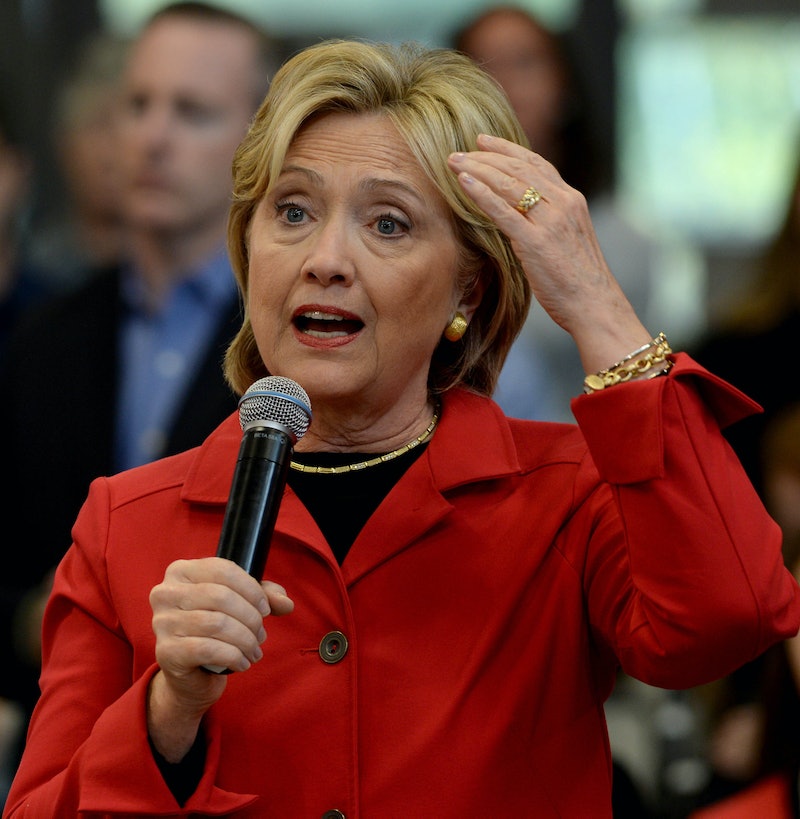 Not only doubling back her own support but also opposing President Obama, presidential nominee Hillary Clinton announced that she opposes the Trans-Pacific trade deal in an interview with PBS' Judy Woodruff on Wednesday. The United States and 11 other nations finalized the deal Monday in an attempt to create a tariff-free zone that covers 40 percent of the global economy. Clinton championed the trade pact as Secretary of State but seems to have changed her mind — a common criticism lobbed at the Democratic frontrunner.

Her views on the pact and free trade more generally have swayed to and fro since her last run for president in 2008. She called for a trade time-out during that election, trying to gain support from unions and labor groups opposed to free trade deals, which they see as moving American jobs overseas. Then after her defeat in the primaries, she took on the role of Obama's Secretary of State, working to sell the deal to other Pacific Rim nations. Since joining the presidential race this time around, she has reserved from sharing a final opinion until yesterday. In the interview, Clinton said she couldn't support the deal, given the high bar she has set for such agreements.

Clinton gives two reasons for her newfound opposition. One is the potential for currency manipulation by member countries, she said. They could make their currencies cheaper against the dollar to be more competitive. She also said the deal could give more power to pharmaceutical companies at the expense of consumers. Given her carefully worded answer — she has "unanswered questions" — we could still see her support the deal in the future. It wouldn't be the first time — or issue — on which she's flip-flopped.

Shortly after the hidden camera videos shot by a anti-abortion rights group came out (in a clear attempt to take down Planned Parenthood), Clinton expressed dismay at the clips she had seen, that focus on the use of fetuses for scientific research and the way in which Planned Parenthood funds the specimen collection. "I have seen pictures from them and obviously find them disturbing," Clinton said. Just days later she tweeted her support for the organization and gave an interview saying that she fully supports the work the organization does to provide essential healthcare services to women around the country.

Two decades ago, she was there by her husband's side when he signed DOMA, the Defense of Marriage Act in 1996. She even said she would have signed it when she ran for Senate in 2000. She didn't change her mind to support marriage equality until 2013.

Speaking with NPR's Terri Gross in 2014, Clinton suggested that equal marriage rights should be decided on a state-by-state basis: "Marriage had always been a matter left to the states." Tweeting "Proud." after the Supreme Court decision is a full 180.

An old charge, but Clinton did support the Iraq War in the Senate. In a speech on the floor, Clinton said she cast her vote "with conviction" because an unchecked Saddam Hussein could endanger the region and the United States. Through the 2008 primary, she refused to call the vote a mistake. Not until her memoir Hard Choices was released in 2014 did she fully backtrack: "I thought I had acted in good faith and made the best decision I could with the information I had. And I wasn't alone in getting it wrong. But I still got it wrong. Plain and simple."

In 2003, you'd think Clinton was a different person: "I am, you know, adamantly against illegal immigrants," Clinton told radio host John Gambling. In 2007 Clinton said she was against providing drivers licenses for undocumented immigrants too. Both views are quite the opposite from her calls for comprehensive immigration reform and critiques of Republican candidates for not offering a pathway to citizenship. Clinton speaking to young Latino immigrants this July: "I'm not about to let anybody who can make a contribution to our economy and our society get thrown away."

Much related to Wednesday's announcement are Clinton's former views on NAFTA, the free trade agreement with Canada and Mexico. In 1996 Clinton said, "I think everybody is in favor of free and fair trade. I think NAFTA is proving its worth." In her 2003 memoir Living History, Clinton acknowledged the agreement was unpopular with labor unions but said it was an important goal to expand trade. It wasn't until she ran for president the first time that she reconsidered her view, saying it hadn't lived up to its promises.

Clinton, like all politicians, has evolved with the times. She will surely continue to do so, but given her long time in the public eye, she needs to refrain from doing so haphazardly — lest the flip-flop criticism start to stick.