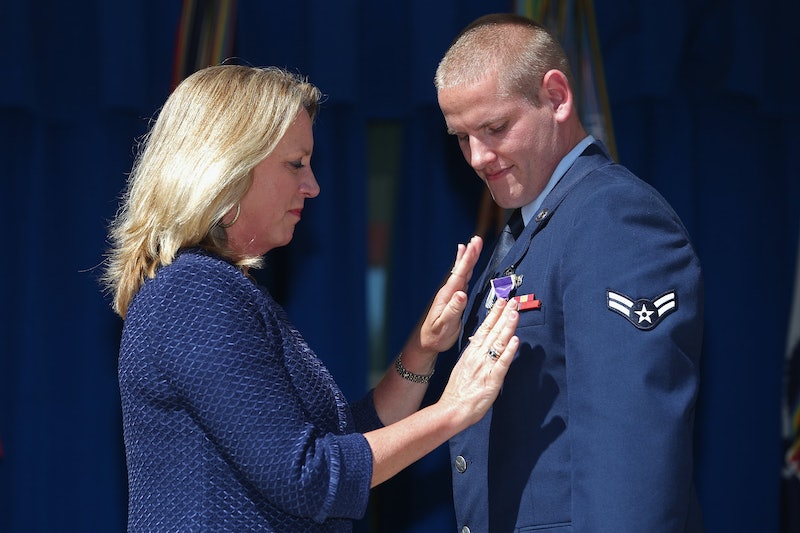 On Wednesday night, one of the three Americans who thwarted a terror attack on a French train, Spencer Stone, was stabbed in Sacramento. The 25-year-old Stone had been "repeatedly stabbed," CBS reports. An Air Force statement confirmed that Stone is in stable condition. Stone disarmed a gunman on a Paris-bound train using Brazilian jiu-jitsu back in August, modestly noting afterwards, "I one hundred percent believe that Brazilian jiu-jitsu saved my life at that moment," to the Air Force Times. NBC News reports than Stone had been in a fight near bars in Sacramento.

Stone was awarded a Purple Heart and an Airman's Medal for his bravery. Stone and his two friends, Anthony Sadler and Aleksander Skarlatos, who had been vacationing with Stone, were widely lauded for preventing a devastating attack. Stone was stabbed during the attack, and underwent surgery to help repair his hand.

In a statement, the Air Force said, "He is alive and in stable condition at this time ... We do not have any information as to the events preceding the incident." It also noted that Stone was stabbed at about midnight Wednesday.

A professor who had been shot during the foiled attack, Mark Moogalian, spoke to the TODAY show after the incident about how kind Stone had been. "I remember it very well because he was talking to me trying to keep me from losing consciousness, and said after this is over we'll go get a beer," Moogalian said.

"Don't worry, we're going to get that beer, and it's going to be under different circumstances this time," Stone replied during a video chat on TODAY. "I'll see you soon, man."