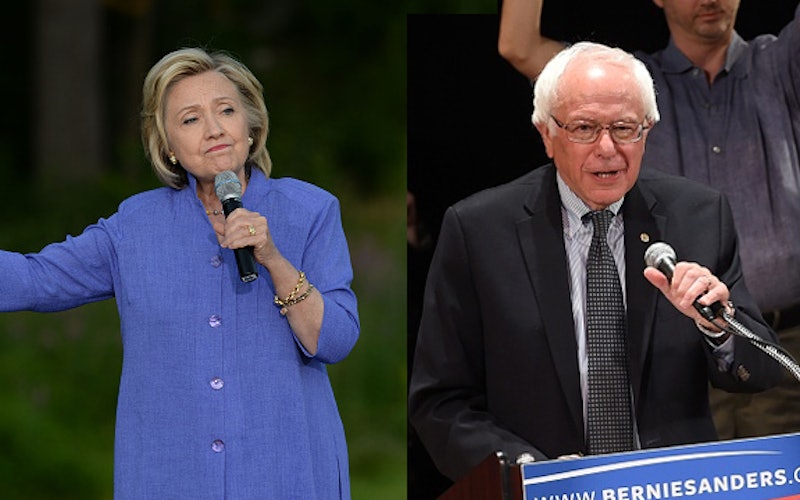 Tuesday’s debate will be the first time in the 2016 campaign that the two leading Democratic presidential candidates will meet face-to-face in front of American voters. The forum will ostensibly focus on policy issues, but the forum will also offer a chance to see how the two interact on a personal level. That itself raises the question of whether Bernie Sanders and Hillary Clinton know each other, if so, what their relationship is like.

According to an extensively-reported piece in Politico, Clinton and Sanders have a working relationship that stretches all the way back to the 1992 presidential campaign, when Sanders was a congressman and Clinton was a lawyer and the first lady of Arkansas. Sanders wrote to Clinton early in the campaign to promote a cancer research bill he’d written in the House of Representatives; he later endorsed Clinton’s husband for president and joined the two on the campaign trail.

But ideologically, Sanders and Clinton have always been pretty far apart. Throughout their careers, Sanders was one of Congress' most liberal members, while Clinton was a staunch centrist Democrat. This divide came to a head in 1993, when Clinton, recently appointed to head the White House’s task force on health care reform, held a meeting with the Vermont senator to discuss the reform effort.

Sanders was (and is) a proponent of single-payer health care — government-provided health care, generally regarded as one of the most leftist mainstream health care proposals in American politics. Sanders, accompanied by two Harvard physicians, made the case for single-payer, and asked Clinton to include it in her proposal. Clinton, while amenable to the idea, was skeptical.

“You make a convincing case, but is there any force on the face of the earth that could counter the hundreds of millions of the dollars the insurance industry would spend fighting that,” Clinton asked, one of the physicians recalled to Politico. Ultimately, Clinton abandoned single-payer in her push for health care reform (which never passed Congress).

Yet despite this and other disagreements on policy, Sanders and Clinton never became enemies on a personal level. Sanders stood by the Clintons in two widely-covered public dust-ups: The Whitewater controversy, a largely trumped-up scandal during the 1992 campaign involving the Clintons’ real estate dealings, and the Monica Lewinsky scandal. Sanders opposed both congressional investigations into Whitewater and Republicans’ attempts to impeach Clinton.

When Clinton and Sanders served together in the Senate together, beginning in 2007, they forged a productive working relationship. The two co-sponsored an alternative-energy funding bill that became law, and the Access for All America Act, a small health care reform bill that died in committee.

It’s to both candidates’ credit that, despite a significant ideological divide, they’ve been able to find common ground both professionally and personally. In June, when the two candidates coincidentally crossed paths at Penn Station, Sanders handed Clinton’s entourage a note, asking if she’d like to have a brief meeting. She replied that she would, and the two talked for 10 minutes.