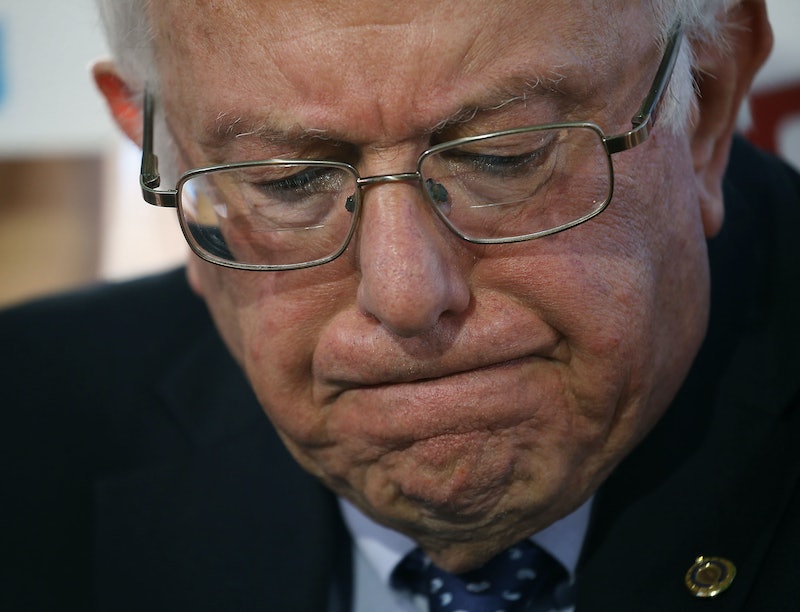 Bernie Sanders has been surging in the polls in Iowa and New Hampshire, but the progressive senator from Vermont continues to struggle outside the white liberal voting bloc. That may change on Tuesday, when Sanders takes on fellow Democratic challenger Hillary Clinton in the first national Democratic presidential debate. It's a make-or-break moment for Sanders, who's looking to broaden his appeal among communities of color and middle-of-the-road Americans.

It may seem strange to say that Sanders and his campaign still have a lot of work to do, considering the Vermont senator has almost taken the "front runner" title away from Clinton. According to Real Clear Politics, Sanders is steadily closing the gap in Iowa, trailing Clinton by an average of 6.3 percentage points. In Iowa, Sanders currently leads Clinton 41 percent to 29.7 percent.

When it comes to the general election, the latest Real Clear Politics polling average shows Sanders can even beat Republican front runner Donald Trump, although it's a slight margin. General election polling averages have Sanders 45.8 percent of the vote, with Trump polling at 41.5 percent.

Sanders has certainly cultivated his grassroots popularity, yet the progressive senator still faces several challenges. Here's the hurdles Sanders must overcome to stay on top of the Democratic primary...

While Sanders may be edging out Clinton in New Hampshire and Iowa, Clinton has overwhelmingly strong support from African-Americans. The latest poll from Public Policy Polling shows Clinton has 51 percent of African-American voters, while Sanders has just 13 percent support from black Americans. Sanders also lost some popularity among African-American voters in July, when he talked over Black Lives Matter activists who interrupted one of his campaign events. Since then, the Black Lives Matter movement has placed most of its attention on Sanders.

Sanders has responded to the movement, releasing a sweeping plan to eradicate racial inequality in America. However, it still hasn't been enough to win over African-American voters.

Sanders is the oldest candidate in the presidential race, yet he's been having a tough time winning over his fellow senior citizens. According to Public Policy Polling, Clinton overwhelming leads Sanders when it comes to senior citizens, 51 percent to 15 percent.

It's difficult to pin down why Sanders, who's a staunch supporter of social security and Medicare, is lagging behind with senior citizens. Could it be that his profile is too low, especially for those who aren't on social media or are outside his grassroots movement? Tuesday's debate will be Sanders' chance to appeal to senior citizens with his platform or elder Americans: protect social security, lower the price of prescription drugs, and increase funding for family caregiving and other support services.

Who loves Bernie Sanders (other than white men)? Young people! Much of Sanders' current fanbase are millennials who are down with his free public college education, minimum wage increase, and overall income inequality fixes that would bolster struggling young college grads everywhere. But Sanders and Clinton are neck-in-neck in clinching the youth vote (tied at 36 percent, according to Public Policy Polling), and both are looking to reel in the social media generation.

Does anyone remember 2008? Young voters turned out and carried President Obama to the White House; for Sanders to get there, he would need the same.