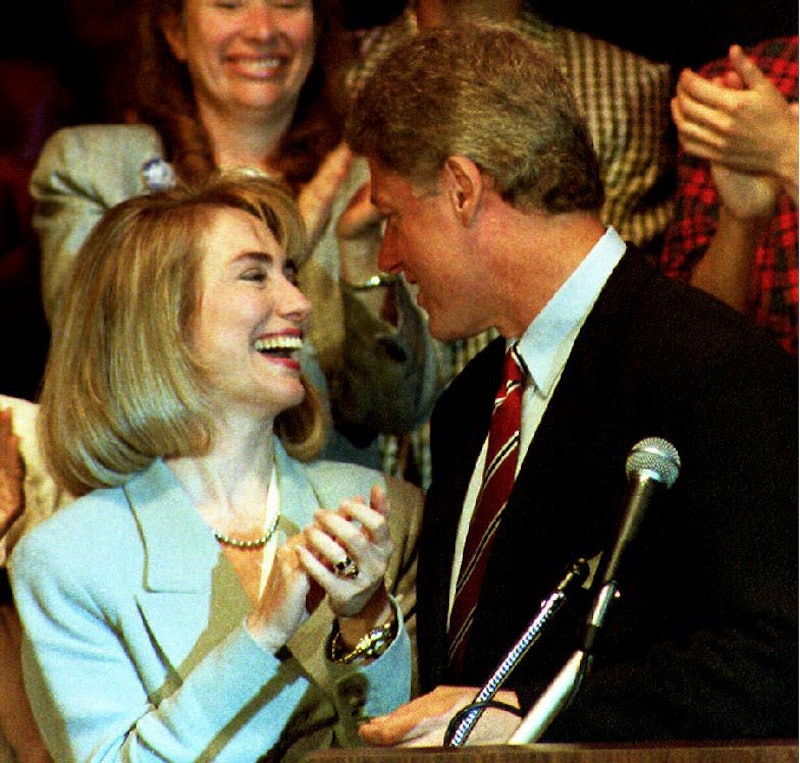 On Sunday, October 11, Bill and Hillary Clinton celebrated 40 years of marriage. Like many marriages, it's had its ups and downs, but the couple showed they've still got a ton of love for each other through matching social media posts. Forty years. Hillary and Bill have each seen some stunning individual accomplishments throughout their lives, but I'd wager that reaching 40 years of marriage was one of the hardest — and most rewarding. (OK, yes, being president is somewhere up there, too.)

Hillary tweeted Sunday afternoon, "40 years ago, I married the cute guy from the library. Happy anniversary, @billclinton—you've still got it!" The couple met at Yale in 1970, where they had multiple run-ins at the school's library. Bill tweeted a photo from their wedding and said, "Seems like only yesterday..."

As detailed by ABC News, Hillary turned Bill down the first time he proposed to her, before eventually saying yes after moving in together in Arkansas. They were married in their living room on October 11, 1975. And as many people already know, the marriage had hard times — most notably Bill's highly public affair with Monica Lewinsky — and Hillary admitted that deciding to stay married to him was a difficult decision. She told Barbara Walters in 2003:

The jury was really out about whether the marriage would survive, whether I wanted it to survive.

But survive it did — and in 2015, it seems like it's also thriving. Hillary and Bill's daughter, Chelsea, recently gave birth to her daughter, Charlotte, Bill and Hillary's first grandchild. The family is often together in both work and personal life, and it all seems pretty wonderful right now.

So congratulations, Hillary and Bill, on making it 40 years and on still being super cute together.