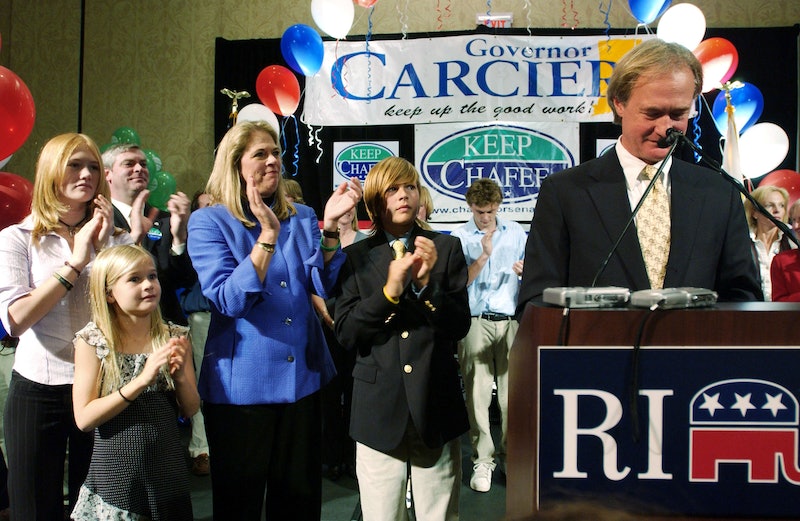 It's hard to tell that Louisa Chafee is the daughter of a presidential candidate. She's absent from the campaign's social media accounts and hasn't spoken publicly about her father, Democratic presidential candidate Lincoln Chafee, since 2011. Well, she has a pretty good reason: her own goal for 2016. Since graduating from Brown University in 2014, she has been training to win a gold medal in sailing at the 2016 Olympics in Rio de Janeiro. She has trained and raced around the world in preparation, most recently coming in third in her boat's division at the 2015 US National Championships in Oyster Bay, New York, in August.

According to the website Louisa's sailing team created to follow their journey to the Olympics, she began sailing at a young age after seeing her cousins do it, but she quit after a really bad sunburn. She returned to the sport the summer before starting at Brown. She quickly moved up the ranks at her yacht club and drew the notice of the Brown sailing coach, who convinced her to try out for the college team. She did, and spent her freshman year training hard. By her sophomore year she started sailing varsity events, made Nationals, and was named an All-American Crew, a big honor, especially for a sophomore. She went on to be named All-American her junior and senior years too. Notably her father, a Brown alum, joined her for the sailing club's Parent/Alumni Regatta. They finished 18th in 2012 and 19th in 2013.

Now as half of Team Rhode Island, she and sailing partner Jeremy Wilmot hope to win an Olympic gold medal for her home state. They're sailing on new type of boat called the Nacra 17 that allows for a co-ed team. The rest of the Olympic events require all-male or all-female crews. They're training with the U.S. Sailing Development Team to prepare for Rio. Only the best sailors are chosen based their likelihood of success at the games and the outcomes of qualifying races in 2014 and this January. Her team's boat is called the "Weetamoe," which Louisa named with advice from her father. Weetamoe was a female Pocasset tribal leader who fought to protect her people and land in what is now Rhode Island, the state where Lincoln Chafee served as U.S. senator and later as governor.

While at Brown, Louisa excelled in other areas too. She wrote for the school newspaper, The Brown Daily Herald, covering topics from medical marijuana on campus to the addition of an alarm system in the school bookstore. She graduated in 2014 with honors in folklore and mythology, writing a thesis on dragons.

Given Louisa's role on her father's 2010 gubernatorial campaign, she's likely to stay out of the spotlight — unless she brings home the gold, of course. Back in a 2011 interview with the Warwick Beacon, she said she "wanted to keep a low profile" and create her own path through life. She also said that politics weren't for her: "I don't like being told I'm wrong, especially not from a very large voter base."

With Olympic preparation until the games in August 2016, she should be able to stay under the radar. If things go well for both father and daughter, though, Lincoln Chafee could have a Olympic medal holder campaigning for him in the general.