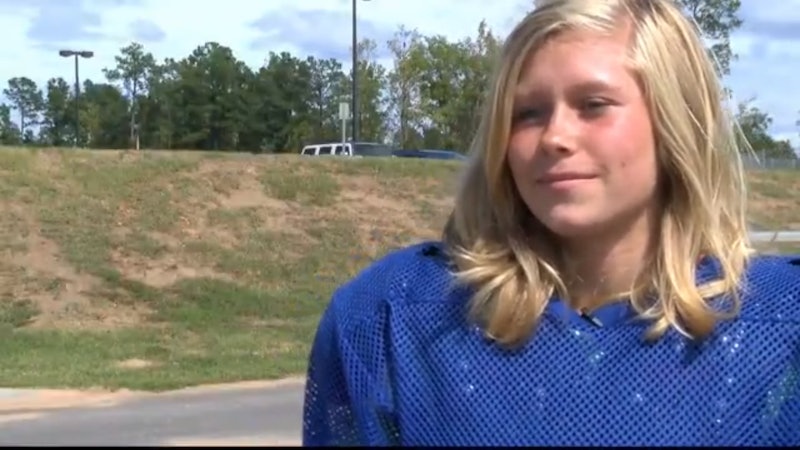 Get your pom-poms out, because you're about to do some serious cheering for Rachel Eaves, a 13-year-old fullback, middle linebacker, and co-captain of the Columbia Middle School football team in Grovetown, Georgia. Rachel has been playing football since the fifth grade, as her mother Lori Burchett told Georgia's WJBF, a local ABC affiliate. According to Rachel, "My stepdad was like, 'You should try out for cheerleading,' and I was like, 'No.'" Rachel joined the Columbia Middle School Raiders last year, beating out about 20 boys who tried out for the team. Burchett says, "It was validation that she was a pretty good football player, not just a novelty of being a girl."

Rachel's coach, Brian Atkins, has nothing but praise for her. From ABC News:

If she didn't have her hair sticking out of her helmet, you probably wouldn't notice a whole lot of difference between her and the other guys. She plays just like the rest of them.

When she came to me in seventh-grade, she had already been playing in some of the youth groups. So she knew a lot of the boys. She was very comfortable playing ... it wasn't like it was her first time playing football when she came to me.

She's very much a vocal leader. She tries not to be because she tries to kind of be quiet ... but she is very good at getting behind the boys and telling them what to do.

Rachel was originally shy and apprehensive about joining the team, but incredibly, there have been no issues. Sounds like the parents of Grovetown are doing a great job! The season is wrapping up for this year, but her coaches believe she's got what it takes to play for her high school team next year. I, for one, hope she goes for it.

This is shaping up to be a great year for women in football. As previously reported by Bustle, Connecticut high school student Erin Bellucci recently joined her Hall High's team as a kicker. Bellucci grew up around football, with her father coaching for another local school, and an uncle who's a former NFL coach. As a little girl, she'd dream of becoming the first woman to play for the NFL. She says that although walking onto the field for the first time was intimidating, her teammates have been accepting.

Things are looking up in professional football, too. Back in April, the NFL hired Sarah Thomas, their first female referee. A Mississippi native, Thomas grew up playing softball and basketball, while her brothers played football. Once she graduated, she missed sports, so she began officiating grade school games, eventually working her way up to high school, and then college. "I think her approach from the very beginning was that all she wants to be is known as an official," her friend and mentor Gerry Austin told ESPN, "But she'll always be a trailblazer."

Then we have Jen Welter, the first female coach for the NFL. Welter originally played for the Indoor Football League’s Texas Revolution, the first woman to play on a men's professional football in a contact position. This past July, she was hired by the Arizona Cardinals to coach during their training camp and preseason. Welter and Thomas met during the course of their duties this past August.

Looks like women are really killing it in football lately! Now, if only they'd let us into the locker rooms ...