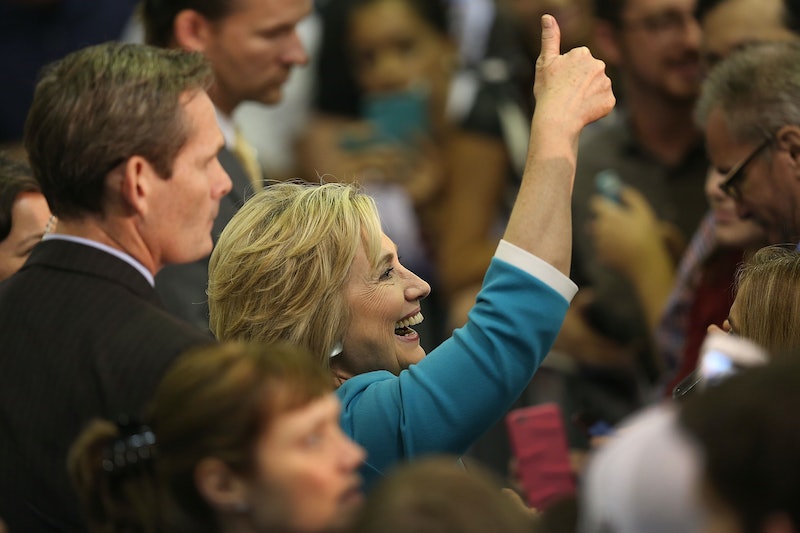 Get ready: Tonight's first Democratic primary debate at 8:30 p.m. EST will give audiences a chance to see Hillary Clinton, Bernie Sanders, Jim Webb, Lincoln Chaffee, and Martin O'Malley face off on the national stage to demonstrate their presidential chops. Yet when it comes to Clinton, many in the media are more concerned with her "likability" — and what she's going to wear — than her actual policies. The sexist assumption that her personality is more important than her politics is an ongoing problem, and it's only going to get worse.

Clinton is one of the most powerful women in politics, with a lengthy career that includes extensive years as a high-powered attorney (she even advised Congress on impeachment proceedings during the Watergate scandal), a dynamic and driven First Lady, a stint as a senator, and a tenure as the Secretary of State. Throughout her time in politics, Clinton has demonstrated that she's driven and focused, with particular attention on rights for women and girls, health care policy, and other social justice issues.

For those who think the era of judging female politicians on their looks and tone is mostly over, it's time to wake up.

However, it's Clinton's pantsuits that often obsess the media far more than her political experience, and journalists continue to speculate over whether her favorability ratings are high enough in a way that borders on the obsessive.

For those who were around for the 2008 presidential cycle, this may feel rather a lot like déjà vu. And it should, because the media breathlessly followed her approval ratings and speculated on her likability on a daily basis, even as it made fun of her every time she dared to show any emotion. "Can Hillary Cry Her Way Back to the White House?" Maureen Dowd asked in The New York Times.

For those who think the era of judging female politicians on their looks and tone is mostly over, it's time to wake up. Clinton is frequently depicted as stony and cold in a way that men in politics simply aren't, and what's treated as "go-getter" behavior from men is considered "bitchy" from Clinton. She was even once afraid herself that she would be perceived as too aggressive for politics. She's not "assertive," but "bossy." And of course Republicans are already harping that she's too old for the Oval Office, drawing upon tired stereotypes about women. Older male candidates are experienced statesmen, but Clinton's nearing her expiration date.

In a piece with the rather loaded title "The Bureau for a Likable and Authentic Hillary (BLAH) is Faltering," Ed Rogers of The Washington Post exemplifies these kinds of attitudes. He describes her recent Saturday Night Live appearance as "cringe worthy," digging into the candidate with a series of statements strongly reminiscent of the "damned if you do, damned if you don't" conundrum that she faces in the media. She can't appear too scripted and cold, he tells readers, and she's not able to handle spontaneous interactions. Rogers suggests that when she recognizes her popular reputation with dry, self-deprecating humor, the public isn't buying it — though the media is always highly entertained when President Obama does the same thing. "Clinton did not have any authentic-sounding responses and came across as uncomfortable and cold, despite her efforts to appear enthusiastic and relaxed," he writes.

Clinton's campaign, Rogers ultimately concludes, is a "slog." But he dodges the fact that three of the official Democratic candidates are virtual nobodies. Because Clinton can't meet Rogers' standard for playing the dutiful role of friendly, fun lady politician, she's obviously an insufficient fit for the presidency. That's despite the fact that she may be the most experienced and electable Democratic candidate, something even Rogers has to grudgingly admit when he notes that "Clinton does have a decent lead in the polls," despite her apparent unlikability.

In a feature exploring expectations for the debates, Amy Chozik at The New York Times discusses Clinton's finely-honed abilities, but can't resist adding: "But there are times when she can hardly veil her sarcasm and disdain," highlighting the fact that the public expects Clinton to disagree with things in a polite way. "Her biggest victories," Chozik writes, "have come in those fleeting and poignant moments when she allows herself to be vulnerable." It's a statement that seems unlikely to be applied to male politicians, who are free to focus on getting their points across and engaging directly with the questions from the moderator and statements made by their opponents.

For Clinton, the demand is much tougher, reflecting how women are consistently expected to perform at a higher standard to receive as much credit as their male counterparts. As a woman, she's expected to play a very specific part, going above and beyond to soften her image and make herself accessible, even though these aren't necessarily traits we need in a president.

Of course, the press has a responsibility to explore many aspects of political candidates, and there is a legitimate conversation to have about personality when it comes to a person who could become the figurehead, chief diplomat, and negotiator of the United States. However, there's a line between honest commentary and disingenuous statements, and Americans should be smart enough to know the difference.

Does Clinton have the skill to interact successfully with foreign powers and domestic politicians? Her stance on issues like reaching an accord with China and recognizing climate change as an emerging national security threat suggest that she's smart and flexible as she approaches foreign policy issues — something that is not the case with candidates like Donald Trump. On the domestic front, she's a strong advocate for gun control, wage equality, women's safety, and equal access to health benefits for LGBQT employees (something she implemented during her time at the State Department).

Furthermore, the very traits that make so many people rail against her are actually assets in a ferociously divided political climate. The ability to swiftly cut through nonsense is far more important than whether she can sufficiently perform femininity. With an aggressively obstructionist GOP and a radicalized country, any Democratic president taking the White House will need considerable public acumen, and that's something Clinton demonstrably has, even if she's not always Miss Congeniality.

Endlessly speculating over whether Clinton will meet likability standards feeds the notion that women in politics need to be likable, which heavily influences public opinion. There's a reason women are so underrepresented in Congress and elsewhere in politics, and that women in politics have to spend so many hours carefully fine-tuning their public image in a way that men do not. They may live in a "lean in" era, but any woman who's actually tried asserting herself knows that it's easy to become a bossy bitch in the eyes of the public, and it's a problem that may hound Clinton as well.

She's not the only female politician who faces the same kind of discrimination, of course — Nancy Pelosi is often referred to as bitchy and controlling, and when Carly Fiorina performed well at the recent Republican debate, she was treated by the media as though she was a dog that had suddenly started walking on her hind legs.

If you're tuning in for tonight's debate — and you should — interrogate how the media talks about Clinton and demand more from major outlets.

In the inevitable dissection of the debates, the number of stories leading with discussions about the color of Clinton's suit and whether she was sufficiently likable is likely going to be depressingly high, because these are the things that apparently matter more than her actual fitness for office. If you're tuning in for tonight's debate — and you should — interrogate how the media talks about Clinton and demand more from major outlets. Twitter's #AskHerMore demands better treatment of women by the media, and it should be getting a workout on your keyboard tonight.

For that matter, it's worth examining how your own internalized sexism plays a role in your interpretation of Clinton's performance. Unreasonable expectations come from ourselves as much as the media, and it's important to deconstruct these narratives. This is a classic case of "if you see something, say something." Call out sexist comments on social media, link to coverage that's doing it right with a focus on Clinton's performance and not her lipstick, and ask friends and family why they're intent on her likability and not her politics. Because until we push back on sexism in conversations about female politicians, the cycle will repeat itself.