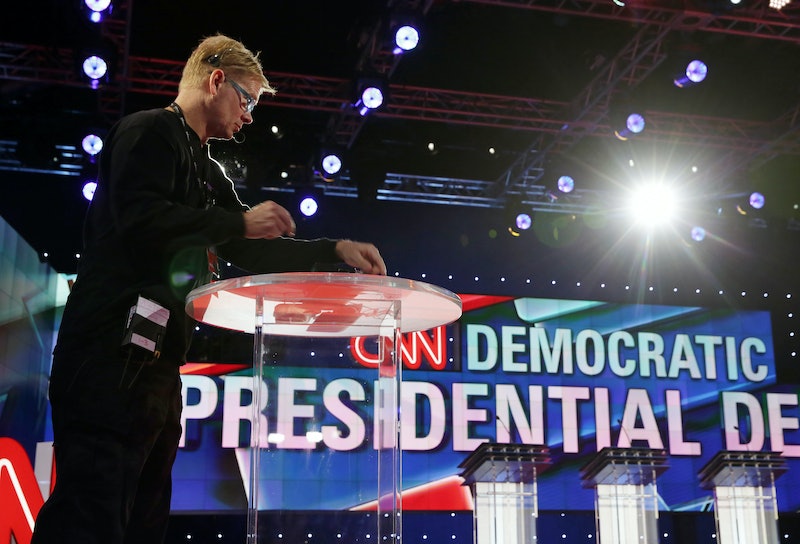 The Republican primary debates were certainly a good source for comedy — I mean, Donald Trump's hair basically writes itself. But from the first moments of Tuesday's first Democratic primary debate, it was clear that this would also be a funny night filled with fodder for Twitter comedians: CNN's opening video was basically an ESPN boxing promo. Sheryl Crow butchered our national anthem (in fabulous leather pants no less). And then, of course, there is always Bernie Sanders' hair, which also basically writes itself. (And then gesticulates emphatically.)

There is lots of comedy to choose from Tuesday night over on Twitter, but one account I noticed in particular is that of comedian Lauren Ashley Bishop, whose handle is @sbellelauren. The comedian, who's from Arkansas but lives in L.A., is killing it tonight with her live tweeting of the debate. A graduate from Northwestern University, Bishop clearly knows her politics — and her comedy. (Plus, her IMDB bio says she voiced the commercial for Popeye's Mama Slap Chicken, which has to count for something.) If you're out there, Lauren, get at me. I think I have a Twitter comedy crush on you. (Wednesday, though, I know you're busy.)

Here are some of my favorites so far tonight:

So true. Except if Bernie was cleaning my teeth, I'd be scared, to be honest.