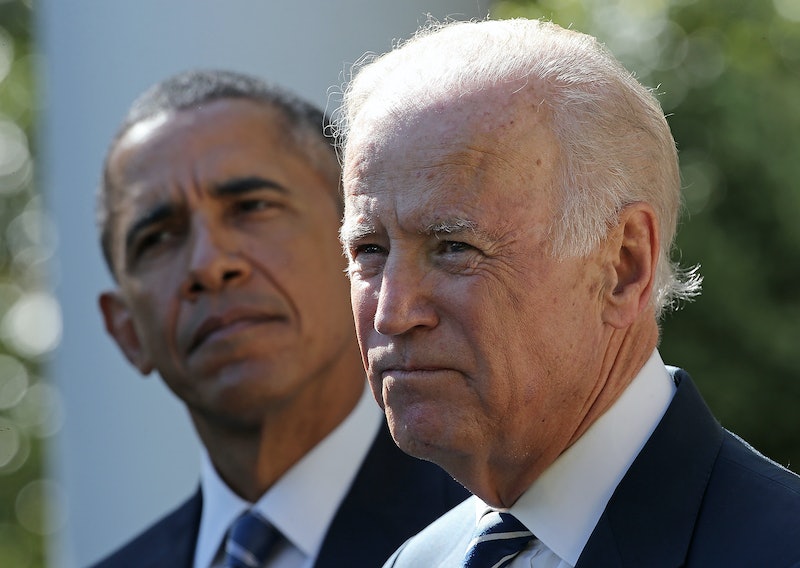 After months of dodging interviewers and dropping vague hints, Joe Biden announced that he's not running for president Wednesday. After nearly falling off their chairs in anticipation, Biden supporters let out a collective gasp, before slumping back into their seats and immediately taking to Twitter to express their sadness. One look at the social media platform Wednesday afternoon, and it's clear that many are disappointed that Biden is not running, reflecting the sentiment of a large portion of America, who kept Biden in the polls alongside Hillary Clinton and Bernie Sanders despite his lack of campaign. Apparently, a lot of frustration can be vented in 140 characters or fewer.

Just after noon on Wednesday, Biden took to the podium in the White House Rose Garden to deliver the news. Flanked by President Obama and his wife Jill, Biden told the country that the window had closed on mounting a potential presidential campaign. It was tough news to swallow to begin with, but watching the vice president's calm, dignified demeanor and listening to his eloquent, heartfelt speech reminded supporters of just why he would have made a great president. The reality was made even more difficult to accept when he started listing issues that were close to him — from helping the middle class to finding a cure for cancer — as if it were his campaign announcement speech. It's clear that America could have really benefited from a Biden presidency.

That's exactly how the Twitterverse feels ― at least, according to these 14 tweets from very disappointed users.

It looks like a lot of people were ready to vote for Biden. These messages of hopes dashed and a hypothetical President Biden are out of love, no doubt about it. But perhaps the best message we can send our vice president at this time is "thank you for everything you've already done."