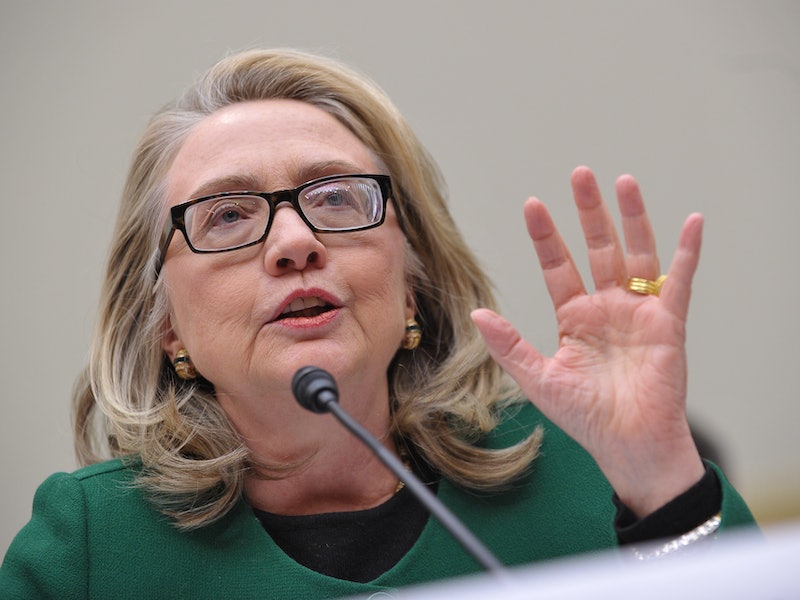 As the nation prepares for Hillary Clinton's testimony in front of Congress, it's clearer than ever before that the GOP's obsessive focus on Benghazi is taking away from far more pressing — and relevant — matters. The attack on the American consulate in Libya happened over three years ago, but 17 months, eight investigations, 21 Congressional meetings, and $4.5 million dollars later, we're still talking about it. The attack that left four Americans dead has been looming over the American people for far too long.

For Republicans — especially those within the House of Representatives — Benghazi seems to hold the key to Clinton's downfall. Through exhaustive investigations, interviews, email probes and more, her critics search for signs that she knew about the attack, willfully ignored ambassador Chris Steven's call for help, or sent him directly into the line of fire. And despite the fact that no such damning evidence has been turned up, if they keep pressing long enough, there's the prevailing hope that something will stick.

And no one can say this isn't about Clinton. As Newsweek points out, there have been several embassy attacks in recent history that didn't generate this level of conspiracy paranoia. In 1983 and 1984, 87 were killed in Beirut while 18 Americans were killed in an embassy attack in Sana'a, Yemen, in 2008. And Clinton's accusers don't deny it — even Kevin McCarthy, the would-have-been Speaker of the House, admitted that part of the goal of the committee is to bring down her poll numbers. Two weeks later, the committee's chair Trey Gowdy pretty much admitted the same.

While the attention on Clinton may be successful at affecting her numbers, it's come at a price for the Republican Party. In the midst of their Clinton-Benghazi obsession, they've let their house fall to pieces — both literally and figuratively. They've ignored real, substantial issues, the ones that should be taking the real attention.

For example, the GOP should focus on one of their favorite discussions to take a crack at gun violence. Instead of digging through emails, their time might be better spent reading about the 10,669 Americans killed in gun-related incidents this year. Or combating the fact that there have been 274 incidents of mass shooting, according to the Gun Violence Archive.

If that's too divisive for them, then perhaps the Republicans could switch the focus to mental health. History has shown that when they channel their collective skills for good, amazing things happen — like the bipartisan effort that passed last year to provide $22.9 million in grants to improve mental health care.

But let's take it a step further, and possibly address the overwhelming number of mentally ill individuals currently incarcerated. According to NAMI, 25 to 40 percent of the mentally ill are jailed at some point in their lives, and The Atlantic estimates that approximately 400,000 prisoners suffer from mental diseases and disorders. Instead of incarcerating them, let's work on supporting them. And, according to the GOP, that will solve our gun violence problem.

While we're talking about justice system reform, why doesn't the GOP tackle the staggering racial inequality within America's prisons? Or better yet, how about a Republican acknowledges racial inequality at all? Maybe they should look at the fact that 927 individuals have been shot by police enforcement in 2015 so far.

Or maybe they should start with something easy, like getting their own party in line and managing to elect a new Speaker of the House. Instead of focusing on Benghazi, maybe House Republicans should work on creating party unity, ceasing infighting, and stopping specific caucuses from throwing the entire House into disarray by pressuring the current Speaker into stepping down and causing another candidate to drop out of the election.

And once they've got a new Speaker and cleaned up their mess on the home front, maybe the GOP could throw their energy into passing a budget — for this year and next. The nation narrowly avoided a shut down (again) when Congress managed to pass a continuing resolution at the last minute. But that resolution ends on Dec. 11, and time is running out for the two parties to agree on a budget that will fund the government for another nine months. If they can manage that, then maybe they should work on the novel concept of preparing budget legislation and figuring out top line spending for 2016 as well, so that the government will not be funded by a continuing resolution for yet another year.

But clearly, none of these problems actually affect lives everyday Americans. No, the only thing that can fix America right now is finding out exactly what is in Clinton's emails.