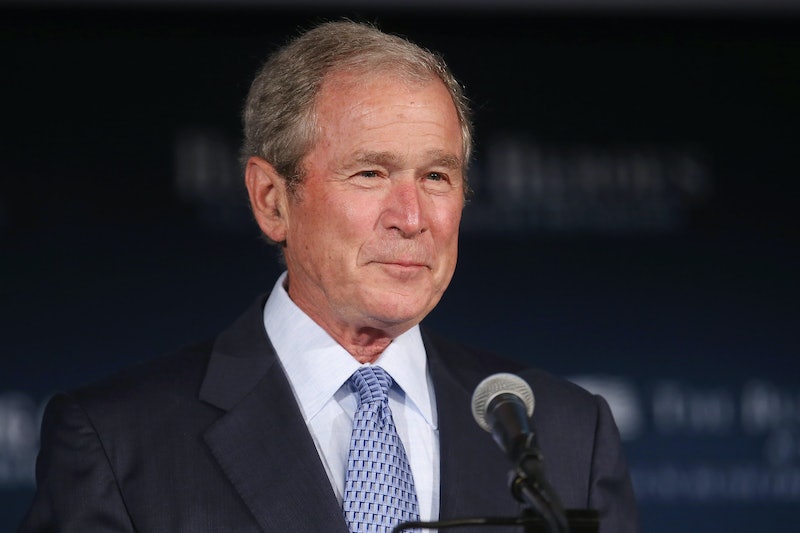 Much like in elementary school, whenever a bully on the playground picks on an underdog, former President George W. Bush dissed Texas Senator Ted Cruz at a fundraiser for his brother Jeb Bush this week in Denver. One of the many Republican candidates for president, Cruz is up against Jeb Bush for the job. At the fundraiser, George W. Bush talked shop with some deep-pocket donors, giving his take on the competition, particularly Cruz. "I just don't like the guy," Bush was quoted as saying.

Bush criticized what he called an apparent alliance Cruz has struck with fellow Republican nominee Donald Trump. The two rallied against President Obama's deal with Iran on the steps of the Capitol together in September, and Trump has said that Cruz backs him 100 percent on immigration issues. According to one donor quoted in Politico, Bush said that Cruz is opportunistically trying to suck up to Trump, hoping that Trump's support will eventually come around to him. Trump has attacked Jeb Bush several times, most aggressively when calling out his record on immigration and saying the former governor has soft spot for people from Mexico because his wife was born there. Cruz, meanwhile, has been left unscathed by Trump.

Former President Bush's open dislike for Cruz may not come as a surprise, given that Cruz got his start working on Bush's 2000 Election Campaign as a domestic policy advisor, but later attacked the GOP establishment and joined the Tea Party to gain national prominence. Earlier this year, Cruz wrote a book in which he attacked W.'s record, blaming foreign entanglements and a bigger government on the former president.

Bush told donors that he thought Cruz would be a tough opponent to beat in the South, particularly in Texas. But then a spokesperson later changed the story. "He does not view Sen. Cruz as Gov. Bush's most serious rival," said Freddy Ford, W.'s spokesman, emphasizing Bush's support of his brother and general positive outlook that he'll win the nomination.

Cruz's response was polite. "It's no surprise that President Bush is supporting his brother and attacking the candidates he believes pose a threat to his campaign. I have no intention of reciprocating. I met my wife Heidi working on his campaign, and so I will always be grateful to him," he said in a written statement provided to Politico.

Despite criticizing his record for political gain, Cruz has apparently long been fond of former President Bush. In addition to birthday tweets, he wrote a 16-page chapter in a book titled Thank You, President Bush, in which he compared the president to Ronald Reagan and Abraham Lincoln:

"Today President George W. Bush carries the mantle of Lincoln as an opportunity conservative, defending the promise of the Declaration and the vision of our great nation."

The fondness may not be reciprocated. But given many people's feelings toward the former president, Cruz might just not care.