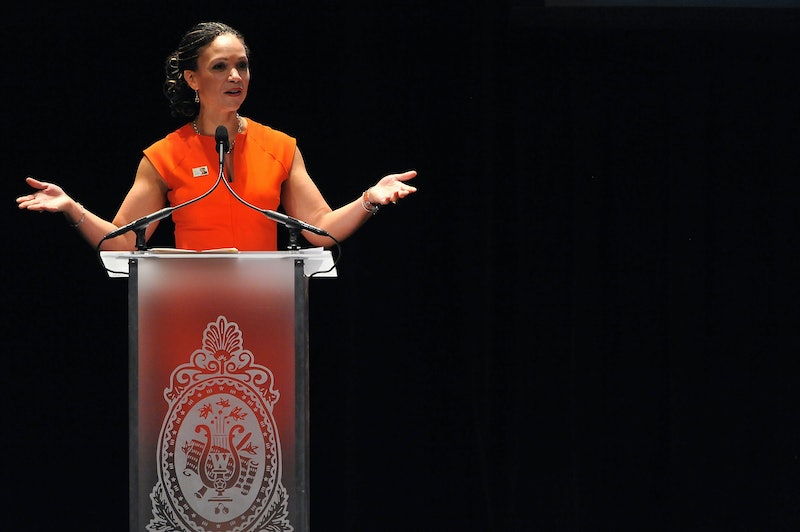 Brace yourself: The third Republican (a.k.a. the party that refuses to stop waging a war on women) presidential debate is coming up on Wednesday, and "paid leave supporter" Paul Ryan, who doesn't necessarily want everyone to actually have paid family and medical leave, has announced that he will be running for Speaker of the House. Former Secretary of State and Democratic presidential candidate Hillary Clinton spent most of Thursday in Benghazi hearings, and Ohio is edging closer and closer to cutting funds for Planned Parenthood. But fear not, fellow feminists: Even though it has been a difficult week, there have also been a bunch of powerful, important feminist quotes in the news this week that will remind us why we're fighting for justice.

It's so important to amplify the voices of other feminists, and make sure to constantly and passionately maintain an inclusive framework. This means that our feminism should be intersectional — that is, it should acknowledge and render visible the intersections between gender, race, class, sexuality, and other axes of identity. Sharing the stories of other feminists, who can provide us with new, refreshing perspectives, can be an opportunity for growth, as well as for healing. In keeping with this outlook, here are some amazing feminist quotes from this week.

Sara Ahmed On What It Means To Be A Feminist

Last week, I wrote about KillJoy's Kastle — a "lesbian feminist haunted house" inspired by Sara Ahmed's book, The Promise of Happiness. This week, I had the privilege of attending a lecture given by Ahmed at Northwestern University, in which she discussed the forms of oppression that institutions impose on us, and how we are very often silenced when we attempt to speak out against this oppression. In describing this phenomenon, Ahmed pointed out a common silencing tactic: "Overing is often presented as a moral injunction," she said, explaining that we are told to "get over it, as if when we are over it, it is gone."

Here, Ahmed refers to the fact that those who speak out against injustice — for example, women who speak out against the wage gap — are often told to stop being so sensitive, as though if they simply choose not to be upset, the oppressive structure will disappear. So what are we to do when we come up against such measures? As Ahmed points out in her blog, Feminist Killjoys, we need to think critically about what she calls "feminist consciousness."

Becoming feminist involves a process of recognizing that what you are up against cannot be located or reduced to an object or thing (which could then be discarded so we could start up again). The process of recognizing sexism was thus not smooth or automatic. Even though I find it hard to remember not being a feminist, it is important to remember that I had multiple false starts. There was so much I resisted: I could take feminism in only bit by bit. Maybe there was only so much I could take in because it meant recognizing that I had been taken in. You can feel stupid for not having seen things more clearly before. You have to give up on a version of yourself as well as a version of events. And maybe we need to remember: how hard it is to acknowledge that a world is not accommodating you because of the body you have.

The above tweet speaks volumes about intersectional feminism: Always be cognizant of who your feminism is or isn't including. This week, Ronnie Ritchie wrote and illustrated a powerful comic for Everyday Feminism about facing and countering their own internalized fatphobia. Ritchie points out that even if we embrace body positivity, it can still be hard to avoid internalizing fatphobia because of the body policing and imagery that surrounds us. Therefore, Ritchie provides readers with five tips to help them get through this process, the last of which suggests that people allow themselves to feel insecure:

Fatphobia has been ingrained in us our whole lives, and that's not something that can just be cut out. So, the most important thing to do is to allow yourself to be insecure. Do your best to be good to yourself in your worst moments as well as your best.

This is an extremely essential point, and one that we often forget when we're trying to promote body positivity. Everyone has their ups and downs and everyone takes care of themselves in different ways; when we fight for inclusion and representation, we should also make sure to affirm — and not invalidate — others' lived experiences.

This week, The Ms. Foundation for Women launched an important campaign that asks everyone, "what does your feminism look like?" The campaign is intended to spark a dialogue about how feminism has changed in the 21st century, and "to paint a broad, inclusive, and intersectional picture" of feminism. Here are some of the ways in which people responded to the question:

As a woman with a disability, traditional white middle class feminism never worked for me because I was never going to be equal to a white man.

What makes me a feminist is that I understand that if women aren't free, I can never be free. As a gay man, really understanding that their struggle is actually my struggle.

The Women Behind #BlackLivesMatter

Cosmopolitan recently did a feature on Patrisse Cullors, Alicia Garza, and Opal Tometi, the founders of the "hashtag-turned-movement" that emerged in the aftermath of Trayvon Martin's death. The three organizers spoke to Cosmo about what inspires them to fight for change, and what that change looks like. One of the questions they received was about why structuring the movement in an intersectional way was important to them, and they had concise but compelling answers.

Black women hold it down all the time and we have been the architects of the movement — not just this current one, but previous ones — since the beginning. So we decided very early on that we weren't going to allow our stories and the stories of black women to be erased.

I often think of Audre Lorde and her saying that we don't live and we don't fight for one specific struggle. We live intersectional lives and so I think that this movement has to reflect that. All of who we are, all of our dignity, and all of our brilliance.

Now that you have all of these brilliant pieces of wisdom in your arsenal, go forth and continue the work of these amazing intersectional feminists!