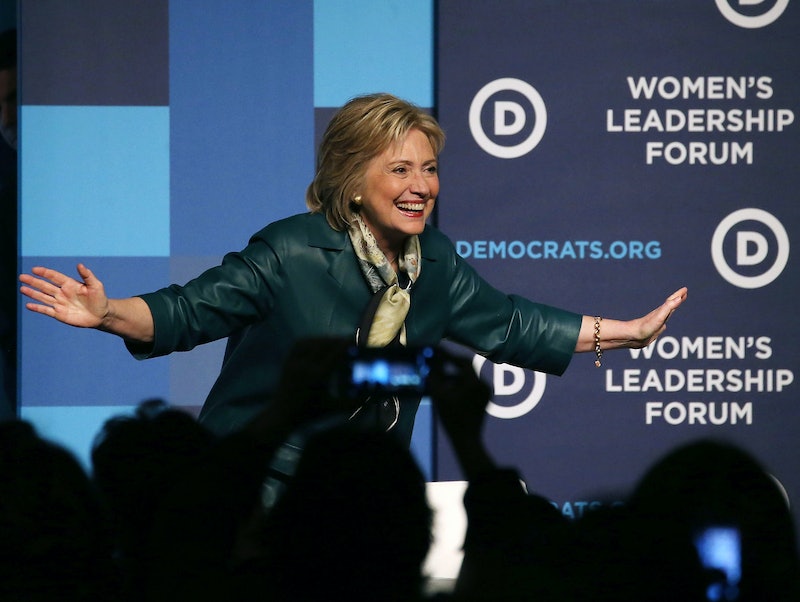 It seems no one had more fun watching the third Republican primary debate than Hillary Clinton. Throughout the evening, the former secretary of state happily engaged in a snappy war of words with the 10 GOP contenders via social media, busting out some of her favorite statistics and one-liners to dispute each candidate's claims. However, nothing topped Clinton's best GOP debate tweet, which featured little more than a hashtag and a hilarious six-second GIF.

Employing the evening's viral hashtag, #GOPDebate, Clinton tweeted a GIF of herself from last week's exhausting Benghazi committee hearing. In it, the former secretary is seen heavily sighing and wiping something from her jacket shoulder, which perfectly encapsulated the general atmosphere surrounding the CNBC-led train wreck. Clinton spent nearly 11 hours testifying before Congress at the highly anticipated panel last Thursday, and the marathon session produced no new information on the Benghazi scandal itself — much like the GOP debate, which was pretty much made up of angry partisan back-and-forth between the candidates and moderators.

Throughout the third primary debate, swaths of social media users and news outlets criticized the night's discussion as out of control, mocking CNBC moderators Becky Quick, John Harwood, and Carl Quintanilla for seemingly showing up to the event unprepared. As the evening progressed, the conversation began looking eerily familiar to the beleaguered Clinton and her campaign staff, which also sent out a series of live-texts to supporters.

"Seems to me: 10 candidates, 0 new ideas," wrote the Clinton camp in a message to the former secretary's base. "So much talk, so little substance."

Clinton wasn't finished either. From healthcare to gay marriage, the Democratic frontrunner used both social media and live tweets to eviscerate the GOP field on its various opinions. "For people who claim to hate big government, Republicans love using it to try and make health care decisions for women," Clinton tweeted early in the evening.

In a later message, Clinton also tore apart a popular Republican argument against climate change. "You don't have to be a scientist to know that climate change is real and we need to address it," wrote the Clinton camp, dismissing the popular "I'm not a scientist, but..." theme from earlier debates and during Wednesday night's early-showing between the bottom four Republican candidates.

Although Clinton wasn't technically present at the GOP throwdown in Boulder, Colorado this week, her dry-humored barbs and fact-checking tweets proved that the Democratic presidential candidate was already prepared to take on both her own party and her rivals across the aisle, no matter how far away November 2016 actually was. With comedic timing like Clinton's, perhaps sending an honorary invite her way next time wouldn't be such a bad idea.