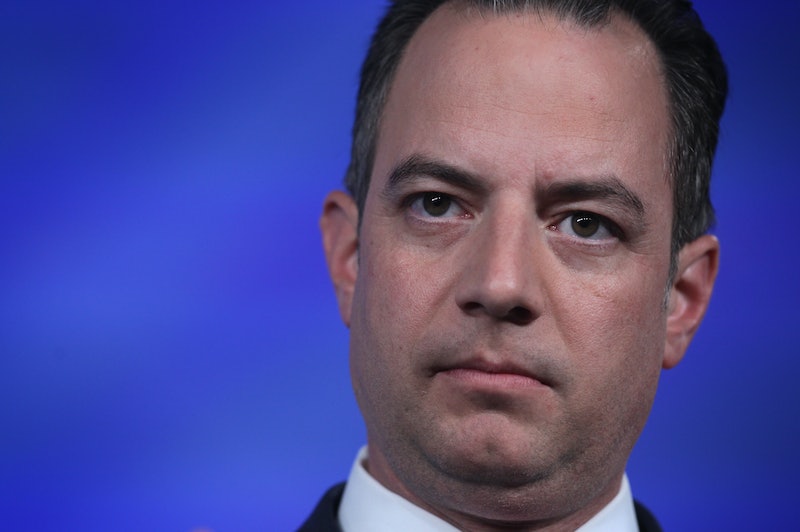 One of the biggest losers of the third Republican primary debate was, in fact, the network that hosted it. During Wednesday's televised debate, the moderators at CNBC were roundly criticized for their performance by journalists, the candidates, and regular denizens of Twitter. And now, joining in on the bashing is none other than Republican National Committee Chairman Reince Priebus, who slammed CNBC almost immediately after the debate was over, saying the network “should be ashamed of how this debate was handled.”

“While I was proud of our candidates and the way they handled tonight’s debate, the performance by the CNBC moderators was extremely disappointing and did a disservice to their network, our candidates, and voters,” Priebus said in a press release. “Our diverse field of talented and exceptionally qualified candidates did their best to share ideas for how to reinvigorate the economy and put Americans back to work despite deeply unfortunate questioning from CNBC.”

CNBC’s conduct was criticized before the debate even kicked off. During the pre-show, the on-screen banter between the network’s hosts was uniformly panned on Twitter, as many found it disjointed and irrelevant. Maybe that’s not surprising; as The New York Times' Alex Burns noted, CNBC isn't not a politics channel.

This displeasure continued when, after all of the candidates had all stepped onto the stage, the CNBC hosts continued their chatter.

The actual debate questions didn’t go over any better. Many accused the moderators of asking "gotcha" questions that had more to do with highlighting stale controversies than assessing presidential qualifications. Such questions prompted boos from the audience at several points. Moreover, the moderators just didn’t have a handle on the event itself, and as a result, the exchanges often devolved into shouting matches between them and the candidates.

Twitter bashed the network endlessly for its performance, and the candidates joined in on the ridicule. In one heated exchange, Cruz excoriated the moderators for cutting him off after he went over his speaking time. He had been asked about the debt limit and accused the network of being “not interested in an answer.” In all fairness to CNBC, Cruz had indeed used his speaking time talking to address a completely different issue — the issue of how badly the debate was being moderated.

CNBC’s self-inflicted its last wound after the debate was over. As is standard practice, the network aired post-debate analysis — but not on the same channel as the debate itself. The analysis was available to stream on CNBC’s website, but the network itself cut to the premiere of its new show, The Profit.

But Priebus, Cruz, and everyone else who was displeased with the debate can take solace in one fact: Barring something unexpected, this will be the last Republican debate the CNBC hosts this election season.