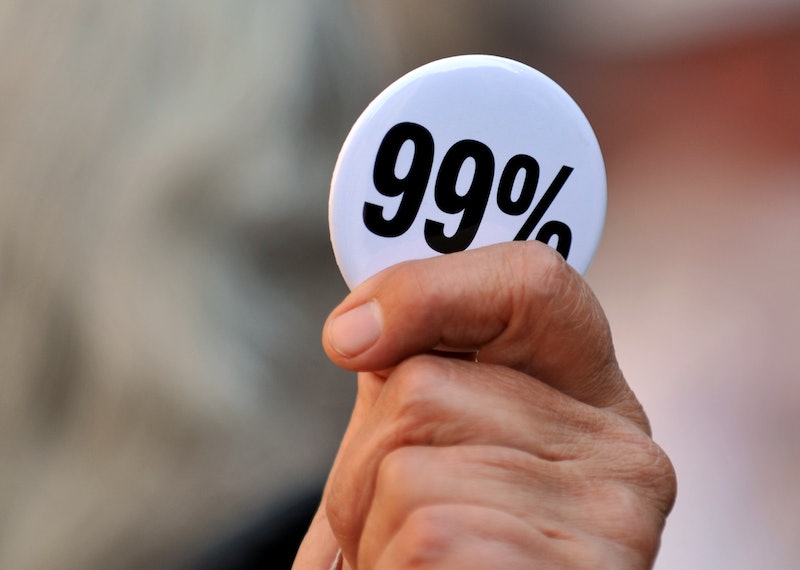 Everyone knows by now that the top issue for Bernie Sanders is economic inequality. It's mentioned in every speech he gives, and he manages to intertwine it with any topic that gets brought up. He brings up the 1 percent, a term that became widely known after the Occupy Wall Street era that describes the wealthiest of the wealthy who get the majority of the United States' income. And after the Iowa caucuses on Monday night that left Sanders and Hillary Clinton in a ridiculously close race — within less than 1 percent — Twitter took hold of that and started making 1 percenter jokes about Bernie Sanders.

With 94 percent of precincts reporting, Clinton was at 49.9 percent and Sanders was at 49.5 percent, and it was still fluctuating. Both essentially gave victory speeches, because hell, it was nearly midnight, you know? In Sanders' speech, he kept his usual chill and kept his economic inequality theme strong, only reinforcing the 1 percenter jokes. He said, "We do not represent the interests of the billionaire class, Wall Street, corporate America. We do not want their money." He continued:

And the reason that we have done so well here in Iowa, the reason I believe we’re going to do so well in New Hampshire and the other states that follow, the reason is the American people are saying "no" to a rigged economy.

Here's some of the best 1 percent jokes Twitter had to make Monday night.

The 1 percent really can make all the difference, both in income inequality and in deciding the Iowa caucus winner. Sanders recognizes that, and so did his fans.