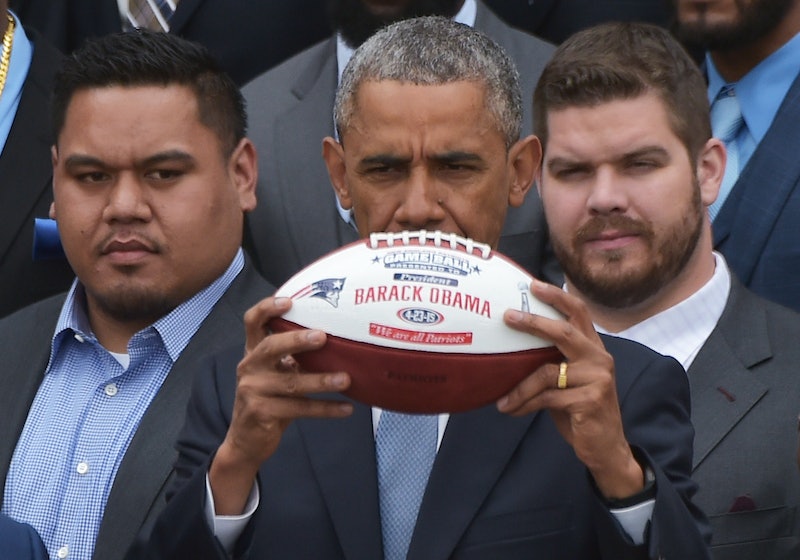 The Super Bowl is coming up on Sunday, which means it's everyone's favorite time of the year: President Obama's pre-Super Bowl interview! For the past seven years, President Obama has preceded the big game with an in-depth interview about sports and politics, and since it's Obama's final year in office, this year's interview should be a great one. The ferocious fight for the party nominations should be definitely be addressed, and given the nail-biting results from Monday's Iowa caucus, there is one major question to which the world needs an answer: Who will President Obama endorse?

Now that Martin O'Malley has dropped out of the race, the Democratic nomination has officially gone down to just two contenders. With the race in a dead heat as of Iowa, an endorsement from President Obama could be a game changer for either candidate. But it looks like the race for the president's endorsement is a dead heat as well. Clinton served as Obama's secretary of state from 2009 to 2013, but Obama also worked with Sanders on the Senate Committee on Veterans' Affairs from 2005 to 2008. The president has taken private meetings with both Clinton and Sanders, and has yet to hint at any intention to endorse either Democrat.

If Obama does decide to endorse Clinton, it would certainly be a good thing for her campaign. Obama has been a relatively popular president, and an endorsement from him could bring big numbers of minority voters to the Clinton camp, the demographic that carried Obama to the White House in 2008. However, Clinton and Obama teaming up might not necessarily be a bad thing for Sanders. Sanders' anti-establishment appeal would absolutely benefit from Obama's support, who ran on a similar sentiment in his first campaign, but a Clinton endorsement could just as easily be spun the other way. Although Sanders has been very publicly supportive of Obama's presidency, he could distance himself from the establishment politics if the endorsement goes to Clinton and still stay on message.

If the president makes an endorsement during his pre-Super Bowl interview, it'll be a big surprise and a big shakeup for the Democratic nomination. Given how well Sanders did in Iowa, the race is far from locked up for Clinton. Polls for the next primary in New Hampshire have Sanders up by 18 points, and a decisive margin like that could seriously impact current Super Tuesday predictions. To make sure he picks a winner, Obama will likely wait it out with the rest of the world.