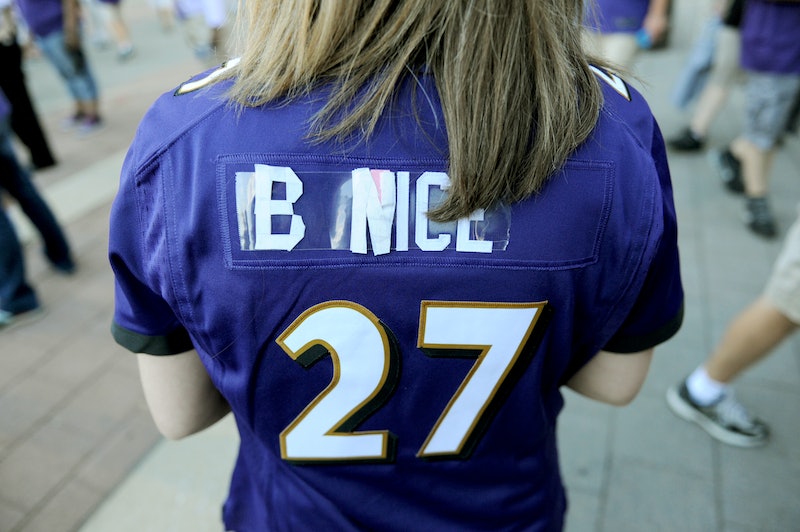 It's been more than a year since NFL player Ray Rice was essentially kicked out of the league for assaulting his then-fiancé, but professional football's problem with domestic violence is still far from over. Since the Rice scandal officially opened this can of worms for the league, the NFL has aimed to improve its relationship with women, and teams have sometimes taken things into their own hands to do the same. Still, as the better part of the country tunes into the NFL's biggest game on Sunday, the bright lights in the San Francisco 49ers's stadium might not be enough to completely illuminate the shadow that has fallen over the NFL's relationship with women in recent years.

In February 2014, Rice, a Baltimore Ravens running back and Super Bowl champ, was arrested for physically assaulting his now-wife, Janay Palmer, in a hotel in Atlantic City, New Jersey. Rice was suspended for two games by the NFL. In September, TMZ released video footage that showed Rice hitting Palmer in the face while they rode in an elevator, causing her to hit her head and lose consciousness. As the video showed, Rice then dragged Palmer out of the elevator while she remained unconscious. Both the NFL and the Ravens claimed that they hadn't seen the full video prior to TMZ releasing it, although that was a little fishy to some people.

Following the release of the video, the Ravens let Rice go from the team, and the NFL suspended him indefinitely. By November, though, Rice's indefinite suspension had been overturned. Since then, he has remained a free agent in the league, as no team has signed him.

Now, let's get one thing straight: Rice is in no way the NFL's only poster child for how not to treat women. In fact, the Carolina Panthers, who will compete in Sunday's Super Bowl, had a domestic violence red flag on their roster not too long ago. Defensive end Greg Hardy, who now plays for the Dallas Cowboys, was found guilty in 2014 of assaulting his then-girlfriend, Nicole Holder. Hardy appealed and he eventually reached a settlement with Holder — and he was suspended for what ended up being six games by the NFL. The Panthers did not elect to re-sign Hardy at the end of the 2014-2015 season, but he remains a prominent player in the league.

One could argue — and I will — that Hardy's ability to remain a highly visible professional football player despite a domestic violence scandal is part of how the NFL has failed women in 2015. Although Hardy's case began in 2014 — around the same time as Rice's case — Hardy's prominence does not seem to have suffered in the same way that Rice's did.

The 10-game suspension does represent a significant improvement over Rice's original suspension of two games, but it is still shorter than or equal to some of the NFL's substance abuse suspensions. For instance, the NFL can impose a 10-game suspension if a player tests positive for marijuana use. I'm not condoning marijuana use, but I can't be the only woman in this country who would rather watch an NFL player smoke weed than get knocked unconscious and thrown into the wall by one.

It's not all bad news, though. In 2015, the NFL welcomed its first female coach. Jen Welter joined the Arizona Cardinals' coaching staff on a temporary basis in July. Welter is out of the league for now, but 2016 already seems promising for female coaches. In January, the Buffalo Bills promoted Kathryn Smith, making her the first female full-time assistant coach in the NFL's history. (Fun fact: The Bills are co-owned by Kim Pegula, a South Korean-born woman with an impressive story of her own.)

The NFL also hired its first female full-time referee in 2015. Sarah Thomas made her NFL debut in September, when she officiated a game between the Kansas City Chiefs and the Houston Texans. In recent years, the NFL has developed a program dedicated to preparing more women for the referee role.

On Sunday, all eyes will be on the men who take the field during Super Bowl 50 — and on the commercials that run during the broadcast — but research shows that about half of those eyes could be female. On Thursday and Friday, the NFL will host the first-ever NFL Women's Summit, featuring Serena Williams, Condoleezza Rice, and Robin Roberts. The event is an effort by the NFL to encourage female participation in sports, particularly from an early age. The league's progress with women has been slow, and it comes too little too late for the women who have been failed by inconsistent suspensions and non-existent investigations, but developments like the Women's Summit and the program to train more female referees could mean that there is hope.