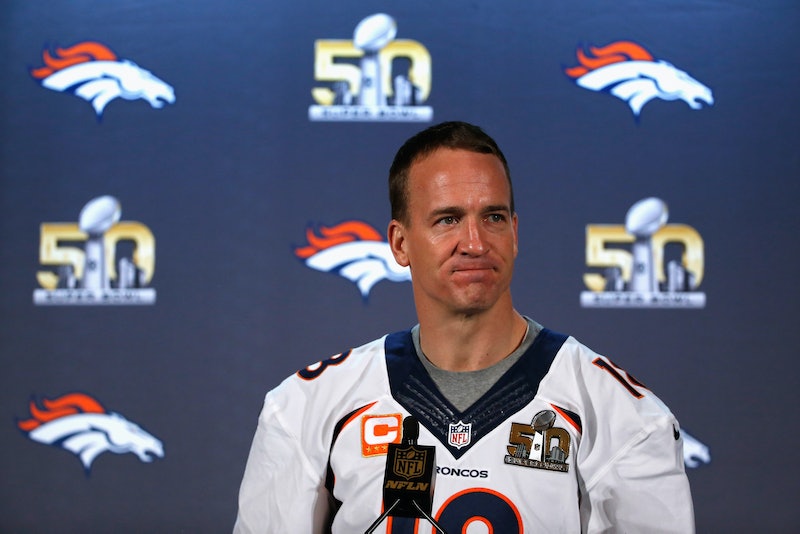 America loves football, as attested to by the fact that last year's Super Bowl was the most watched televised program in U.S. history. The 2016 Super Bowl on Sunday is likely to be wildly popular, particularly because this is likely going to be legendary Denver Broncos quarterback Peyton Manning's last game. After a rough start to the 2015-16 season, which saw Manning benched due to health issues, he triumphantly returned to help land the Broncos on the field for Super Bowl 50. So check out these fun Peyton Manning memes before the game to boost your spirits.

Manning is a five-time National Football League MVP whose career began in 1998 with the Indianapolis Colts. He played with the Colts for 14 seasons until 2011, after which he joined the Broncos. ESPN reported on Wednesday that, according to his doctor, Manning will likely require a hip replacement in the future. Manning has had a number of surgeries due to the toll of the game on his body, including a major knee surgery and four neck surgeries. The 39-year-old missed seven starts in 2015, according to ESPN, due to a plantar fascia tear near his left heel. Though it may be time for his body to retire, his fans may not be so ready.

The big game can be watched on CBS; online at CBSSports.com; and on Xbox One, Apple TV, Android TV, and Roku.

Poking some fun at quarterback Tom Brady and the New England Patriots, who lost their final game to the Broncos 20-18 on Jan. 24.

But it goes both ways. Manning has won one Super Bowl, while Brady has won four.

Comparing the QB to the controversial Biblical figure Job, who emerged blessed from unparalleled trials and tribulations.

Sunday might be his chance for a new day!

Manning has found himself in some controversy since December 2015, when Al Jazeera accused him of using human growth hormone as a performance enhancer while recovering from neck surgery in 2011. Manning absolutely denies the accusation.

Some painful but funny looks back to Super Bowl XLVIII, which the Broncos lost 43-8. Manning threw two interceptions (like this one, to Seattle Seahawks safety Kam Chancellor in the first quarter) and only one touchdown.

But there are some positive memes, too!

But not all. This dude must be real eager for redemption. Will the (potentially) final game of his long career see it happen? Tune in Sunday at 6:30 p.m. ET to find out.