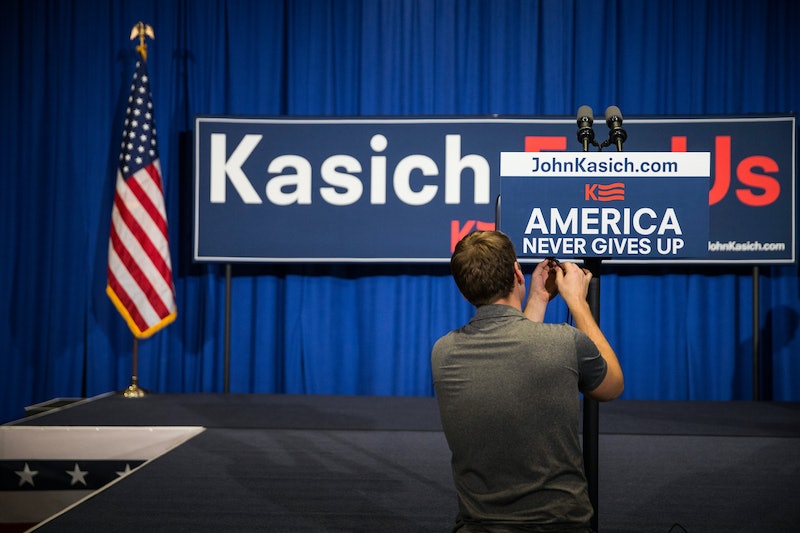 If you haven't followed the presidential election all that closely up until now, you might not even know who John Kasich is. On Tuesday, voters in New Hampshire proved that they do indeed know the Ohio governor, who's running for president in a crowded field of Republican competitors. After taking second in the state, Kasich's speech celebrated his victory and the supporters that got him to it.

There's something that's going on that I'm not sure that anybody can understand. There's magic in the air.

Kasich didn't exactly come close to New Hampshire's winner, Donald Trump, but he held a firm lead over all the other candidates in the field, including Iowa caucus winner Ted Cruz. The victory may seem unexpected to outsiders, but upon closer examination, it actually makes a lot of sense. Kasich largely focused his campaign efforts in New Hampshire, even while his competitors were still focused on Iowa. In a sense, he knew that New Hampshire was do or die — and so he did.

"If I get snuffed out in New Hampshire, it's ballgame over," Kasich told a group of New Hampshire supporters in New Boston back in January. At that time, he held more town hall events in the Granite State than any of his GOP opponents. On Tuesday, during his victory speech, Kasich announced that he had eventually held 106 town halls in the state. His campaign strategy was clear: Stand out from the other so-called "establishment" candidates enough to win New Hampshire.

He didn't win, but he definitely didn't get snuffed out, either. Kasich's time in New Hampshire was validated as time well spent on Tuesday night. He recognized that validation during his post-primary speech, saying, "The people of New Hampshire have taught me a lesson." As his campaign continues, he vowed to continue campaigning in the New Hampshire way — taking his time, listening, and going slower. He also told his supporters to get ready for anything:

If you don't have a seat belt, go get one.

After thanking his supporters and preaching his campaign messages, Kasich couldn't leave without appealing to the audience of die-hard conservatives with a jab at both of his Democratic opponents. "Bernie [Sanders] talked so long I though he was going to hit his 77th birthday on stage," Kasich quipped. To Hillary Clinton, he suggested that she head to South Carolina immediately, because "it's not working here."

Kasich is probably somewhat right. Whatever "it" is, it wasn't working for Clinton on Tuesday, when she lost New Hampshire to Sanders. It seemed to be working for Kasich, though, as he rose from the bottom of the establishment pack to the top, placing second in the primary behind Trump. Next, Kasich will have to find out if there's magic in the air in South Carolina and Nevada.