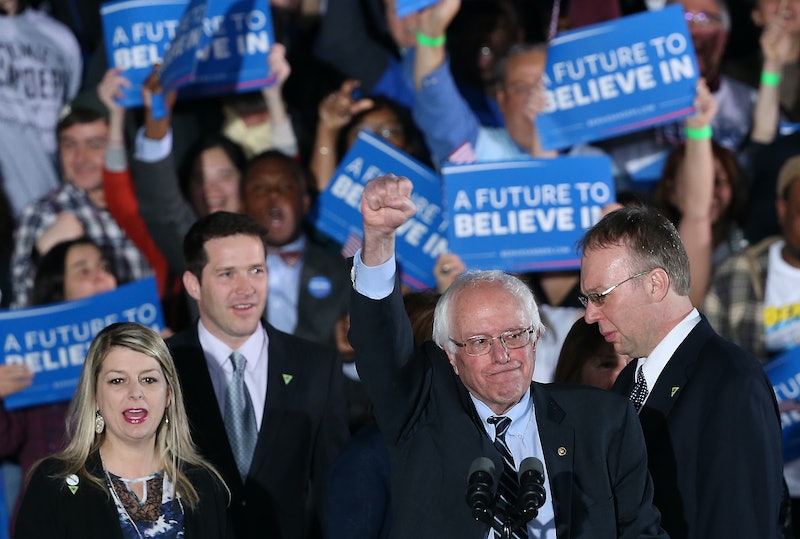 The New Hampshire primary on Tuesday night was the first of the nationwide primary elections, kicking off the road to nominating the GOP and Democratic presidential candidates. The primary this year was no joke as New Hampshire expected to have a historic turnout. Not only did the race rake in big numbers of ballots, but it also changed the landscape of the race and revealed more of what's on voters' minds.

It's clear that after Tuesday night, Democratic presidential candidate Bernie Sanders came out on top, coming in with not only a significant win over rival Hillary Clinton but also capturing the eye of the media and the American public, who once saw Sanders as the underdog candidate. Sanders, who stood in front of a rousing crowd of supporters in Concord during his victory speech, attributed his win to the record numbers who came out to the poll. "Tonight, with what appears to be a record-breaking voter turnout, because of a huge voter turnout — and I say huge — we won," he said. "I say we won because we harnessed the energy and the excitement that the Democratic Party will need to succeed in November."

The record turnout on Tuesday was no surprise, as state officials had prepared for the situation. But though Secretary of State Bill Gardner predicted a large turnout, some polling locations were so hectic that there were worries of ballots were running short. A reason behind the unusually high turnout is the number of political independents in the state, with the demographic making up about four in 10 primary voters. New Hampshire typically has a high turnout of independents, but it won't be so common in the next state primaries.

If anyone's gleaming in the high voter turnout, no doubt it's Sanders. He summed up his feelings on voting numbers during his victory speech when he preached: "Let us never forget, Democrats and progressives win when voter turnout is high. Republicans win when people are demoralized and voter turnout is low." Thanks for the piece of wisdom, Bernie.

More like this
Watch Jacinda Arden’s Devastatingly Honest Resignation Speech
By Sam Ramsden
Twitter Is Panicking Over Panic! At The Disco Breaking Up
By Radhika Menon
Eurovision Has Been Given A Whole New Look Ahead Of Its Liverpool Debut
By Bustle UK
Man Meets Politics: ‘Boy Meets World’ Star Ben Savage Is Running For Congress
By Jake Viswanath
Get Even More From Bustle — Sign Up For The Newsletter
From hair trends to relationship advice, our daily newsletter has everything you need to sound like a person who’s on TikTok, even if you aren’t.