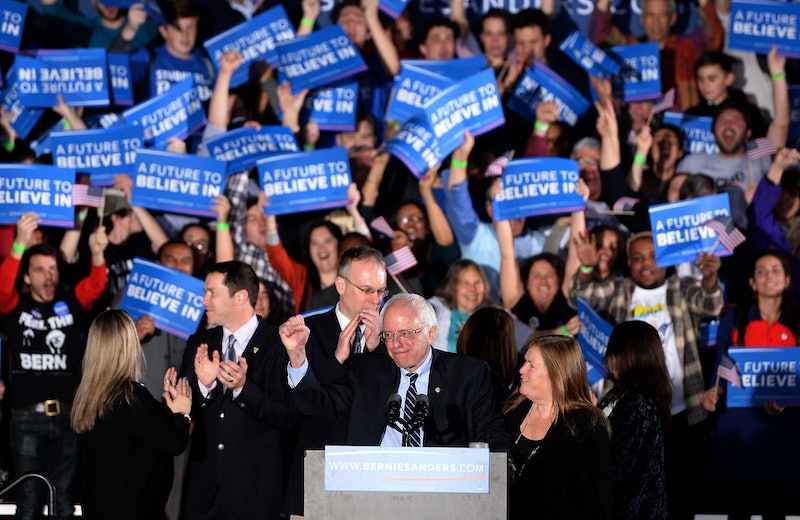 As the great presidential campaign apparatus shifts its focus to the south and west, there is an important figure from the New Hampshire primary that nobody is reporting on: 51,178. That is the number of votes in New Hampshire by which Sen. Bernie Sanders outstripped Donald Trump. In the primaries, Sanders garnered 151,584 votes to Trump's 100,406. Even when Trump's total is combined with that of moderately surprising runner-up Gov. John Kasich (44,909 people in the Granite State voted for him), Sanders still bested the best the GOP has to offer by 6,269 votes in the state.

To continue in this vein, former Secretary of State Hillary Clinton received 95,252 votes. Somewhat shockingly, this means that 5,154 more New Hampshire voters have taken to Trump's flirtation with fascism than have to Clinton's politics. However, it seems as if turnout amongst Democratic voters wasn't as strong as it could have been. The 2012 general election in New Hampshire saw 369,561 votes cast for Barack Obama; combined totals for Sanders and Clinton this year showed that 122,725 potential Democratic voters were missing from this year's primary vote.

Before setting up your very own Homeland-style wall to figure out what's going on, it's important to keep in mind that primary contests generally draw less enthusiasm than general elections. It is also possible that the low turnout could have been influenced by the relative lack of excitement compared with the GOP campaign, or even with the 2008 Democratic primary. In 2008, Clinton was able to eke out a win in New Hampshire over Obama and John Edwards, getting 112,404 votes, or 39.1 percent of the total share, out of a total of 287,557 cast. The fact that she captured fewer votes — both in actual terms and percentage-wise — this year amid an anemic Democratic turnout doesn't necessarily bode well for the party going into the next phase of the primary cycle.

Just how low was engagement amongst New Hampshire Democrats? Exactly 195,658 votes were cast for Sanders and Clinton combined this year. That is 33 percent fewer votes than in the 2008 primaries, and almost half of the amount of people who voted Democratic in 2012. On the other hand, Republicans managed to turn out 279,130 voters this time around. Despite Sanders' win over both Clinton and Trump in New Hampshire, it is clear that the Democrats must do more to make sure that their party can stand against the eventual GOP nominee.

More like this
Romance Authors Are Mobilizing For Reproductive Rights
By Natalia Perez-Gonzalez
New Coins Unveiled As King Charles III's Reign Gets Underway
By Sam Ramsden
What Is A "Hot Girl Book" & Why Is Everyone Talking About Them?
By Samantha Leach
The Spiritual Meaning Of Angel Number 1010
By Nina Kahn
Get Even More From Bustle — Sign Up For The Newsletter