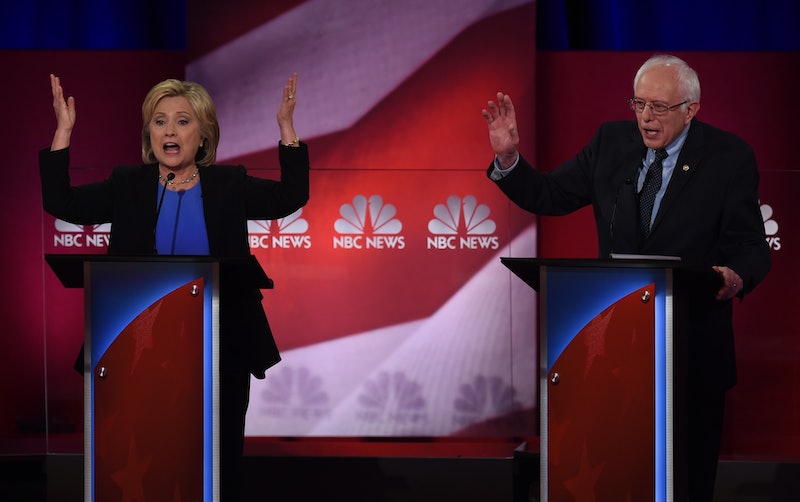 While Republicans and Democrats continue to battle it out for their parties' nominations, there's already one clear winner of the 2016 presidential election: memes. Specifically, few memes have remained as consistently popular or generated more commentary than the one pitting Bernie Sanders against Hillary Clinton: the "Bernie or Hillary?" meme. Whether you discover the meme via Tumblr, Facebook, or Twitter (it has an account boasting more than 60,000 followers), at this point, you would have to be living under a rock without wifi not to have seen at least some examples of "Bernie or Hillary?," doctored campaign posters that compare the two Democratic candidates' views on any number of topics — wolves, extra sauce?, Call of Duty, Eminem. You know, the serious issues that are weighing heavily on the hearts and minds of Americans across the country.

The responses attributed to Sanders and Clinton in this series tend to paint the former as an incredibly cool, nothing-short-of-kickass dude who can speak millennials' native tongue and the latter as a robotic, out-of-touch tattle-tale, striving unsuccessfully to win over the popular kids. For example, on the subject of sleep, Sanders' response is "[chugging vodka red bull] I'LL SLEEP WHEN I'M DEAD" versus Clinton's response of "[plugging self into wall outlet] Robots do not need to sleep" — because Clinton is an over-programmed shell of a human and Sanders is totally awesome and consumes alcohol like a college freshman, get it? On the pressing topic of web browser selection, Sanders chooses Google while Clinton chooses Bing, the message being that Google is, of course, what all the cool kids use and only a total lame-o would use Bing.

In all honesty, some of the humor — or, rather, attempted humor — in the "Bernie or Hillary?" memes simply escape me. For example, on the issue "Omg where did u get ur shirt?," I am not sure what exactly about Sanders' response of H&M is so dramatically cooler than Clinton's "lol I forgot."

Maybe my unwillingness to comprehend the hilarity of the meme makes me a humorless Hillary.

However, whether or not the meme is funny is not what has raised some red flags. Rather, many critics have argued there's an undertone of sexism to the Bernie-Hillary dichotomy expressed in the meme. "Many are asking why the joke has devolved into the female candidate always being the one to not know anything about a particular topic," Buzzfeed's Ryan Broderick wrote of the accusations of sexism in "Bernie or Hillary?" He and others on the web have pointed out that it plays off the "Fake Geek Girl" meme or the "Idiot Nerd Girl" meme, which are premised on mocking women for attempting to fake a knowledge of (traditionally masculine) geek culture. The Houston Press' Jeff Rouner wrote "make no mistake, sexism is the only reason people laugh at these memes. It's the only way the joke works. How else would they be funny if we weren’t all reared in a society that constantly portrays women as clueless and out of their depth when dealing with 'men’s things.'"

Perhaps aware of these accusations of sexism, the meme has created a "Bernie or Hillary?" example that paints Clinton as relying on a knee-jerk charge of sexism to deflect criticism. As Slate's Amanda Hess noted, there's a certain meta-quality to the "Bernie or Hillary?" meme because "calling the meme sexist is, according to the meme, a very Hillary thing to do."

Initially, Clinton's mock response in the meme echoed my opinion when people asked if "Bernie or Hillary?" was sexiest, as I mentioned in Bustle's "The Chat Room" podcast.

No, not all critiques of Hillary Clinton, even ones targeting personality, are inherently sexist. Clinton's record in politics shows she's, well, a politician, willing to compromise and change her views as needed to get stuff done. That shouldn't be considered a flaw (if anything a strength), but it does stand in stark contrast to Sander's aggressive, I-don't-give-a-fuck, non-party affiliated history in politics. It's not sexist to point that out and make fun of that discrepancy.

Some have pointed out that the reason we think of Clinton as robotic and out-of-touch in the first place is because she is held to a different personality standard as a woman, with traits that would be commended or unnoticed in a male politicians being scrutinized and mocked in her. That is a fair concern, though one would hope that people concerned about sexism and, for that matter, feminism would set their sights on weightier issues, such as ensuring reproductive rights for women or greater access to educational opportunities for women in the developing world. Whether or not a female politician is portrayed unfairly as a geek, boring, or dated seems petty in the grand scheme of concerns for women (and those who care about women's wellbeing).

However, there are certainly examples in the "Bernie or Hillary?" meme where sexism is apparent — and it should be roundly pointed out and criticized. Perhaps not surprisingly, it's an example that uses language that is offensive to women where the memes appear more blatantly sexist. For example:

And even in examples where Clinton's response doesn't fall into a sexist stereotype, there is a somewhat misogynistic undertone to the issue being posed to the candidates. Case in point: the topic of "hoes."

The "Bernie or Hillary?" meme may not be wholly innocuous and free of sexism. Unfortunately, neither is campaigning or, should Clinton make it to the White House, serving as president. However, Clinton is almost certainly not losing sleep or giving pause to ignorant, stupid, and not terribly funny jabs. Maybe we should take a page from her playbook and do the same?